Shino Akitsu has always been able to ‘see’. Strange people who disappear suddenly, creatures from fairy tales and myths–Shino has witnessed them all. As a small child, her grandmother told her to never let anyone know what she saw, and Shino has lived with that in mind ever since. But like all secrets, it can’t stay hidden forever.

While participating in a test to get a government job, Shino accidentally lets on that she can see things that others can’t to a very observant and persistent man. One thing leads to another, and she discovers that there’s a secret sector of the government that deals with these fantasy beings known as Ayakashi. She’s quickly roped into joining up, and after some extensive training, Shino officially becomes an Ayakashimori and travels to the in-between world of Sakuratani where the Ayakashi live. But things aren’t as hunky-dorey as they seem, and Shino will need to graduate from rookie to expert quickly if she hopes to help maintain peace in either world. 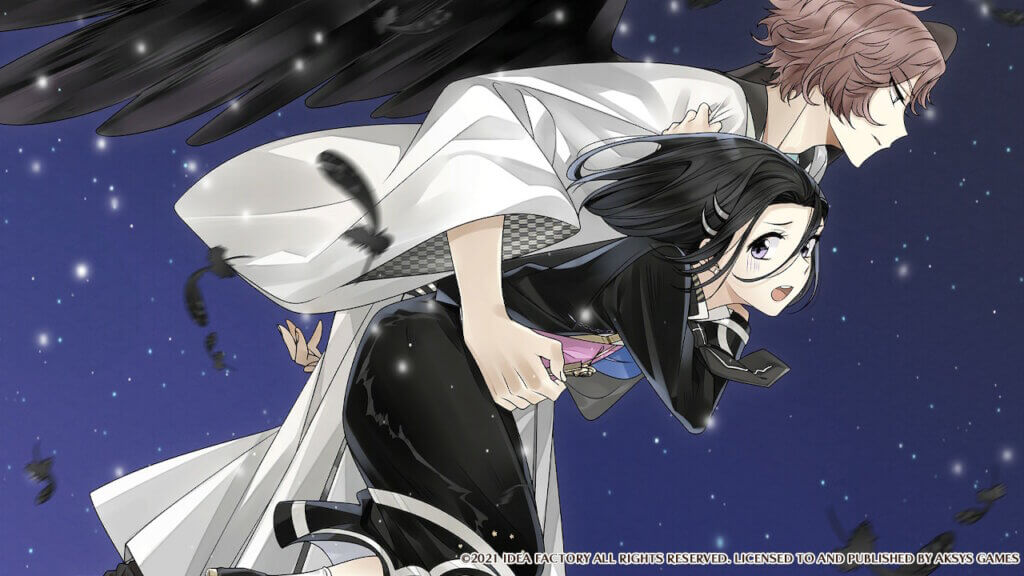 Hardworking and persistent, Shino is happy to help the Ayakashi in any way she can. It takes her a bit to get used to the citizens of Sakuratani, but once she does, she finds she prefers to be there than the real world. With plenty of friends and even more work, Shino is right where she wants to be. 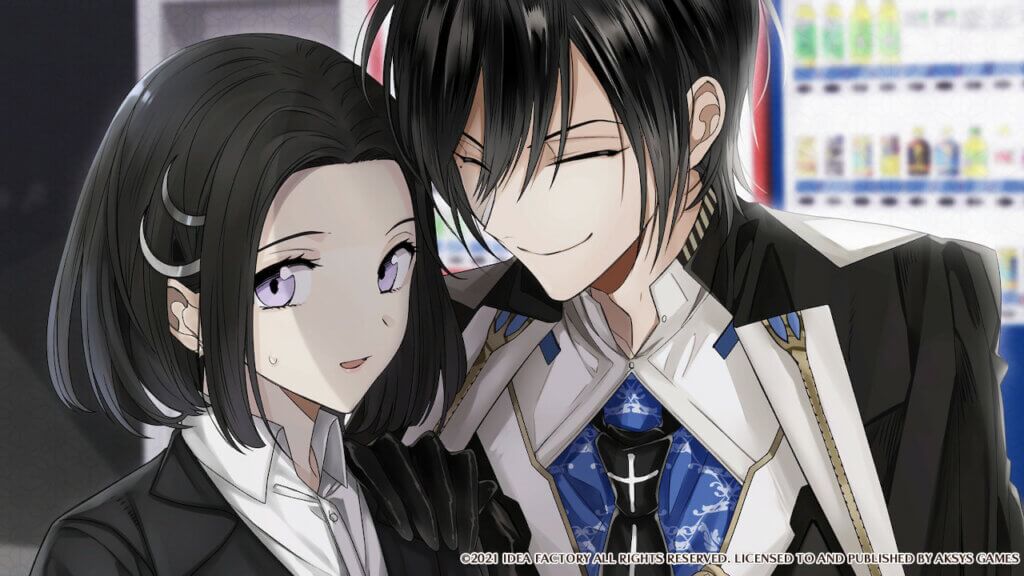 Tokitsugu comes from a long line of onmyouji, and his family’s history in the spiritual and mystical arts have helped shape him into one of the best Ayakashimori that Sakuratani has. But with great power comes great responsibility, and this youngest-ever squad leader has a lot of things he’d like to keep under wraps. Luckily for him, he has two workers that are happy to help and are incredibly easy to tease, so he’s never lacking for company or a good laugh. Tokitsugu is voiced by Toshiyuki Toyonaga (Piofiore: Fated Memories, Fire Emblem: Three Houses, Yuri on Ice). 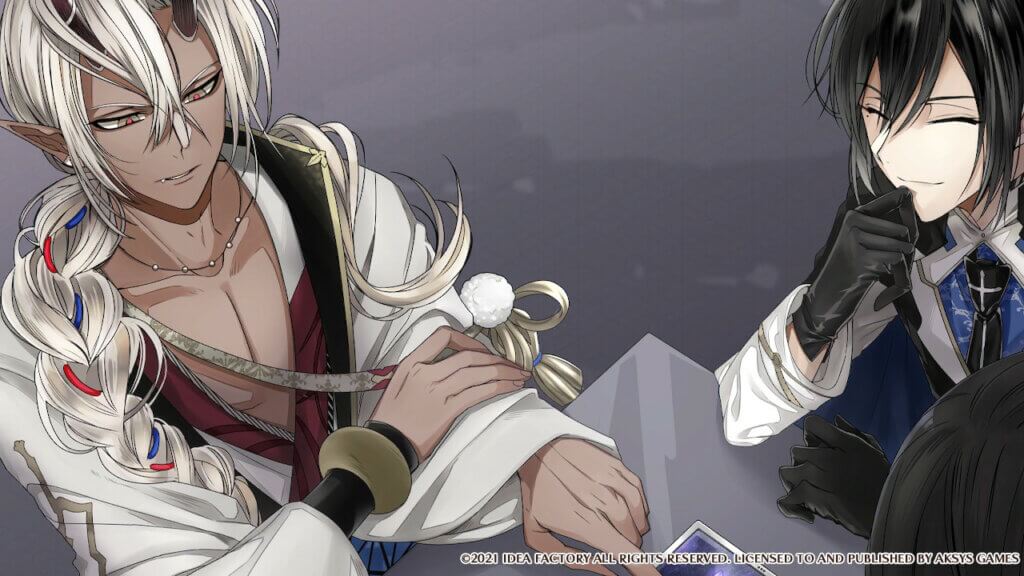 Akuro is the aid to the leader of Makatsuhi, but he does most of the work around the area to keep all the oni and other denizens in his sector happy and out of trouble. Despite his frightening appearance, he’s kindhearted and best friends with Tokitsugu. With a love for real world items and a knack for fixing things, he is one of the most reliable Ayakashi around. Akuro is voiced by Tatsuhisa Suzuki (Lover Pretend, My Next Life as a Villainess: All Routes Lead To Doom!, Final Fantasy XIV). 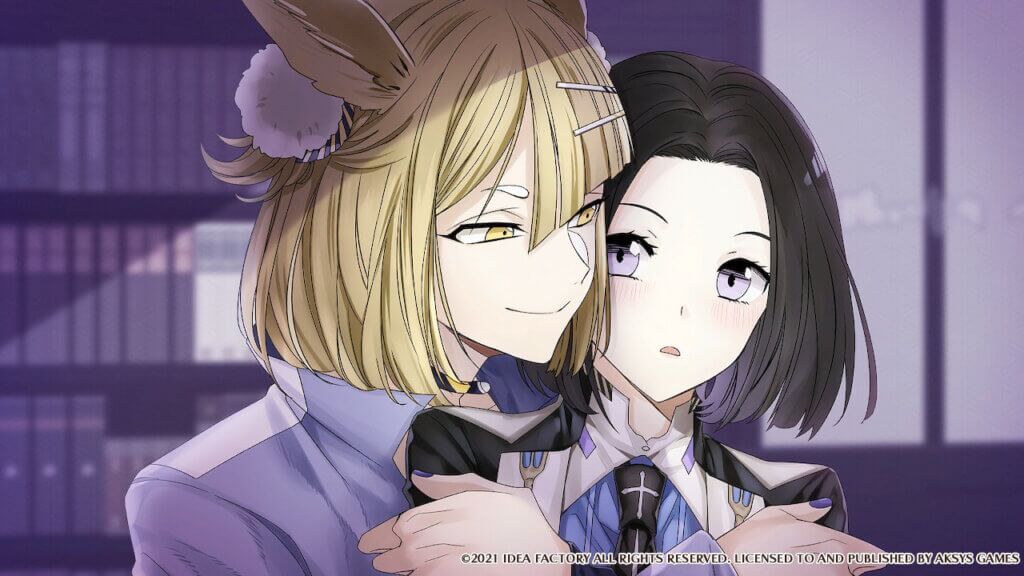 This fluffy, funny nine-tailed fox is the leader of Kikutsune. He has a passion for real world fashion and has a penchant for speaking like an old man. He’s also a big prankster and loves to crack jokes. Don’t let his laissez-faire demeanor fool you: he’s ready and willing to protect what’s his at the drop of a hat. Shiratsuki is voiced by Takahiro Sakurai (Period: Cube ~Shackles of Amadeus~, Bad Apple Wars, Kitty Love -Way to look for love) 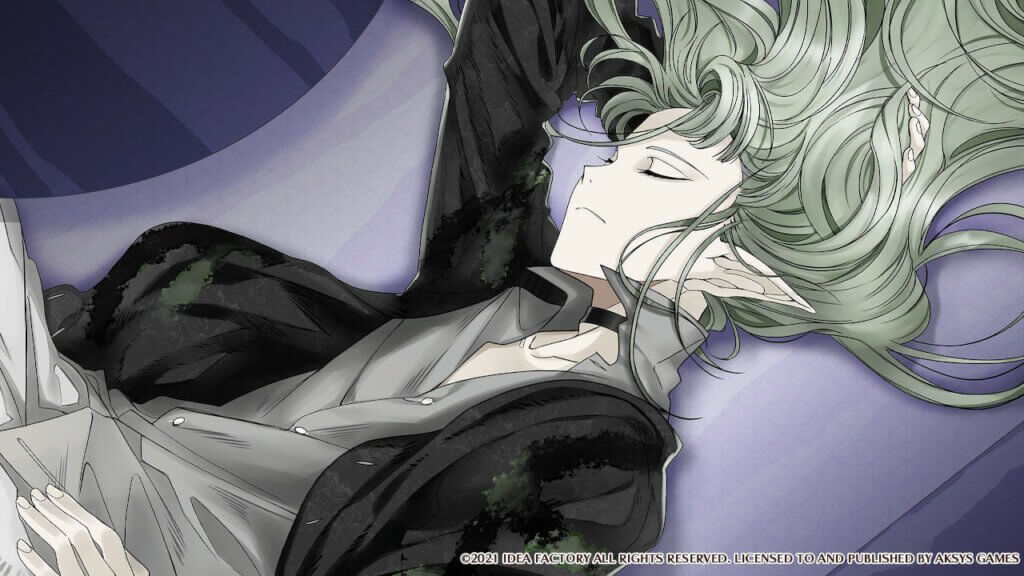 Despite being the leader of Amatsuna, Hira is as hands-off as they come. Constantly finding things boring or too much work, this tengu is more than happy to push everything off to his aid, Takao. Despite trying to get out of almost all responsibilities, Hira can be surprisingly helpful when the need arises. Hira is voiced by Yusuke Kobayashi (Dr. Stone, Re:Zero – Starting Life in Another World, Taisho Otome Fairy Tale). 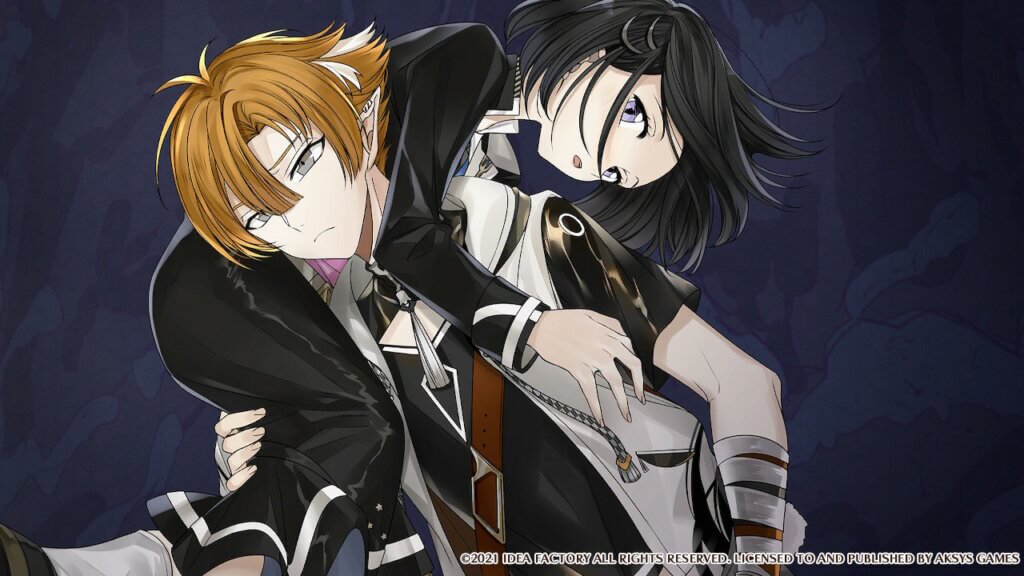 Aloof and the supposed leader of the mysterious Mitsuchi group, Shu is not one to sit around and talk or make friends. Instead, he can be found slipping through the streets and disappearing without a trace. He seems to hate all Ayakashimori, and he is unwilling to work with them or any Ayakashi outside of his group. Because of this, not much is known about this snake ayakashi. Shu is voiced by Ryota Osaka (Fena: Pirate Princess, Tokyo Revengers, Genshin Impact).

Dairoku is a pretty straight-forward otome: make choices, collect CGs and Dictionary Terms, romance the five love interests available, and see which ending you get. There are a few different takes on some of these elements that makes the game easier and a little different than others in the genre, and anyone who has played Bad Apple Wars will have an idea of what to expect.

To start with, the game utilizes a well-done flowchart to streamline the process of unlocking endings. It’s easy to go back and forth between chapters and scenes, and hovering over a scene’s ‘box’ will indicate if there is a CG and/or choice within it. Not only that, but the boxes will turn from white to purple when every option has been read in each scene. (This will be important later.)

Dairoku is the type of game where players ‘stalk’ the LIs. Every so often the game presents a map of the world and indicates where each LI is. Players will select which area to go to and which character in that area to interact with. More interestingly, there are also Battles to select. Choosing a battle instead of a character during a map choice will trigger a minigame, and successful completion will lead to the MC’s skill level raising. This is important for unlocking other endings in the game, but don’t stress too much about this—the minigame is very easy and insanely forgiving. 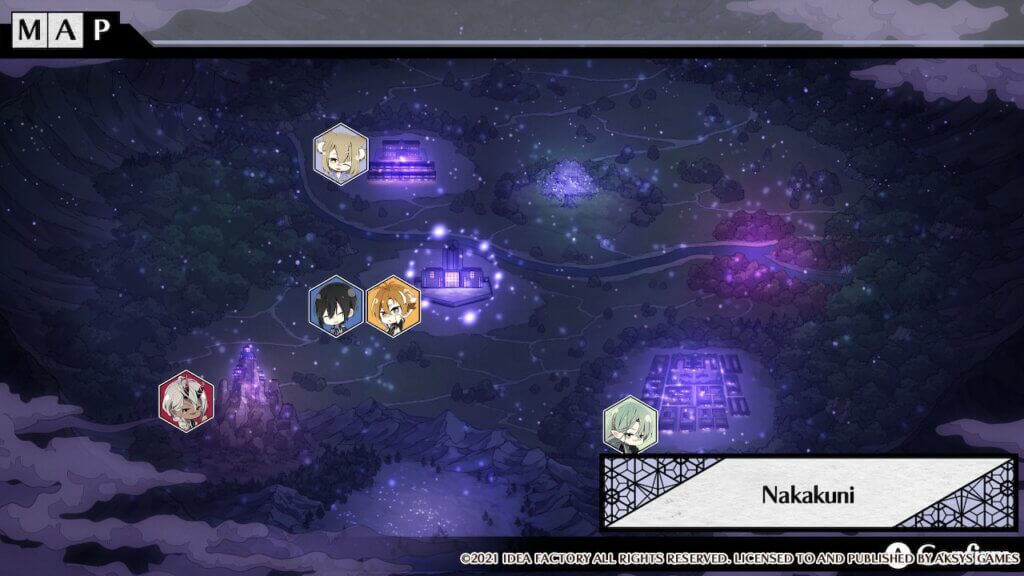 Affection notices in the form of colored flames in the bottom right corner of the screen will appear to indicate if a choice affected any of the LIs, as well as a Status page that can be accessed anytime during gameplay, showing a meter for each boy. The MC also has a meter that indicates her skill level. The Love Catch can be turned off from the Options menu for those that like to go in blind.

Dictionary Terms will appear as purple text, but unlike most other otome where the word needs to be clicked on, there is no popup box that needs to be read to secure the find. Instead, once the word has been found, it’s automatically added to the Dictionary.

One of the best additions to Dairoku is the Completion Check page. This breaks down the Common Route and all six specialized routes by chapters and endings, and it shows a percentage on how much content has been accessed in each section. For completionists, this page will quickly become invaluable.

Dairoku does have completion CGs, and one of the requirements to get them is to 100% complete every chapter. When it comes to the map selection scenes, you only need to see each boy’s scene once, and that’s when you’re on his route. Because of this, the best thing to do is to select the ‘wrong’ choice first, then utilize the rewind function and select the ‘correct’ choice. This allows you to see both scenes and quickly check off both choices in your completion log. The other option is to go back into the flowchart from the title screen and replay each section in its entirety. This will take a little longer, but is a valid option.

One of the options Dairoku gives players is the ‘Audio Sync’. This causes spoken line text to be slowed down to match the speed of the voice actor while all other text speed is determined by the Text Speed setting. For players who don’t want to wait for the text to appear, turning this off will cause all dialogue to be the same speed. 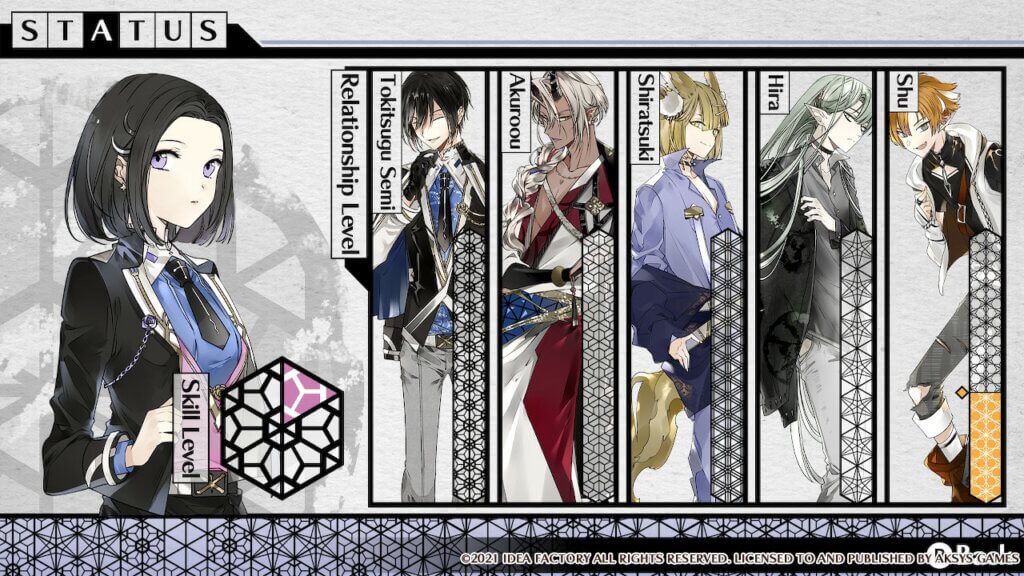 When in an LI’s route, there are times where a bouncing ball will appear on the right side of the screen. This indicates that a side-story has been unlocked in the LI’s perspective. I highly recommend these be played immediately after unlocking them. You can select it from the flowchart, and playing it will not make you lose your spot in the route. Instead, once it’s finished, it returns you to the flowchart and you can back out of the menu from there and be right where you left off.

If you’ve 100% completed the game and are still missing CG #11 in the Other section, try these things to make it appear: listen/read all of the Private Files, read all of the Dictionary Terms, go to any map selection scene and redo a battle purposefully bad. After these, go back into the Gallery and a popup message should indicate it’s been unlocked. (I honestly am not sure what finally triggered it for me, but after doing everything I mentioned, it finally appeared.)

Unlike most otome, Dairoku doesn’t have a single locked route–even the Finale route is available from the beginning. That said, there is still an order I would recommend based on overarching plot content. From the least amount of plot to the most:

Translation and Editing by Engrish Localization

Curious what I thought? Check out my review for Dairoku: Agents of Sakuratani! 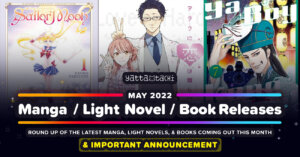 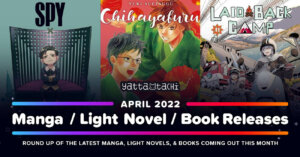 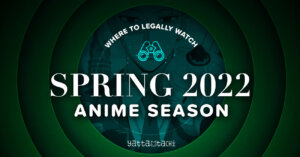 Spring 2022 Anime & Where To Watch Them Online Legally 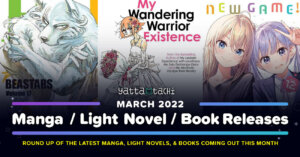