Don’t know anything about Dairoku: Agents of Sakuratani? Check out my Overview and Walkthrough Hub here!

It’s been a while since an otome steeped in this much Japanese culture has been released, and Dairoku makes it an enjoyable experience. From the Ayakashi populating Sakuratani to the myriad historical architecture each of the three main sectors boasts, there is no shortage of culture and aesthetics. Even the music–which I loved and was a highlight of the game for me–uses traditional instruments like the shamisen, taiko drums, and the koto, boosting the atmosphere that much more.

To go along with the setting, many common and instantly recognizable places and names are shown and mentioned. There’s a shopping trip to Akiba, discussion about Ikebukuro and Shibuya, and quite a bit of talk about Oda Nobunaga. I enjoyed being immersed in so much Japanese culture for this title, and all the little touches, like the menu sound effects, just made it better.

Okay, now let’s get to the main point of all this: the boys. Dairoku’s character design is great. I enjoyed seeing such different LIs (different from each other and other otome) and their wide range of personality types kept each route feeling fresh. You’ve got your jokester (Shiratsuki), your cool-headed softie (Akuro), your innocent tsundere (Shu), your teasing-superstar of a boss (Tokitsugu), and your Shikamaru that thinks everything is a drag (Hira). It was so fun getting to know each of these characters and watching them grow, and the fact that the character interviews are already translated to English made it that much better. And readers, get this: I actually teared up in one of the Lost Love ends. I haven’t cried over an otome since… actually never. I have NEVER cried over an otome, but damn. Shiratsuki got me. He got me good. So take that as you will.

Unfortunately, this game didn’t receive the same quality QA as its predecessor, Olympia Soirée, did. Dairoku has its fair share of mistakes, mostly revolving around using incorrect participles and leaving out definite articles as well as some very awkward sentences. There were also a few misspelled words, missing words, and punctuation mistakes, but these were sparse compared to everything else. As a whole, the grammar and localization weren’t great, but it was also nowhere near the worst I’ve seen, even in terms of this year alone.

The game seems to lean heavily on players having a good understanding and basic knowledge about Japanese myths, which causes problems for players who don’t. There were many Japanese words that I didn’t understand that weren’t Dictionary Terms, and most of the time they weren’t expanded upon. There were times where I could use context clues to figure out the meaning, but that didn’t always work. The game definitely could have used a few extra text boxes explaining some of these topics in more detail (or a recommendation to a good book for reference). 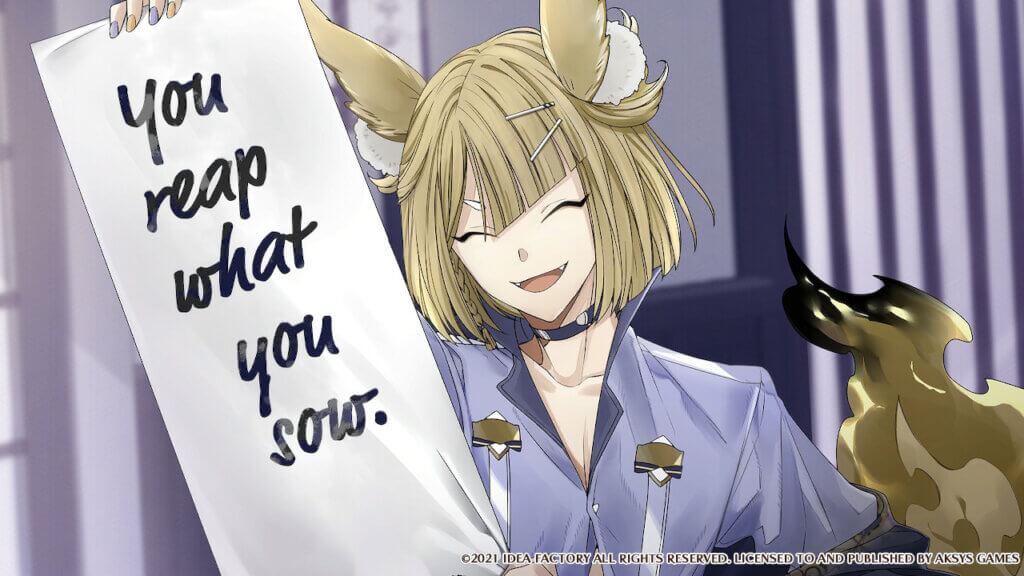 The art is hit or miss for me. Some CGs and BGs are fantastic–I absolutely love the Fujizakura tree, the Firefly Garden, and the Field of Autumn leaves–but others feel a little off and textureless. Even the CG quality flip flops from image to image. It’s hard to pin down what exactly the differences are, but the fact that the MC doesn’t have a nose in most of them may be it.

The routes were pretty homogenous, too. Each LI has a Love End, Broken Love End, and Friends End, and each of the three plays out like the three before it and the three after it. Though the characters changed up the story a bit, the fact the plots follow the same, stiff structure every time got boring and predictable. Also, the Friends End somehow tended to work out just as good as the Love End without all the drama? And the side characters usually got a better slice of the cake? Honestly, I preferred the Friends End in many of the routes because of this. That, coupled with how late any actual romance occurs in each route, the game left me a bit unsatisfied.

All in all, Dairoku: Agents of Sakuratani is a cute, low-fluff otome in the same vein as Cupid Parasite and Café Enchanté. Players looking for a title to fill in the gaps until next year’s releases will enjoy their time in Sakuratani, but I don’t expect Dairoku to take off in the community like Piofiore: Fated Memories did. In my opinion, it’s still definitely worth playing if the chance arises. And while my time playing was short (somewhere near 40 hours), I enjoyed the vast majority of it. But it’s also not one I see myself returning to time and again.

A special thank you to Aksys for allowing us the opportunity to review this title.
Receiving a review copy of this title has in no way altered the opinions expressed in this article.