We’re back with our second First Impression for the Spring 2021 season. For those unfamiliar, here’s the deal: before the start of each new anime season, our readers vote on what series they’d like us to cover, and we review the first episode of the three series with the most votes. In this season’s case, it will actually be four shows, since we had a tie! Those shows are To Your Eternity, 86 (Eighty-Six), Tokyo Revengers, and Blue Reflection Ray. Of those four, Tokyo Revengers is the second to air. 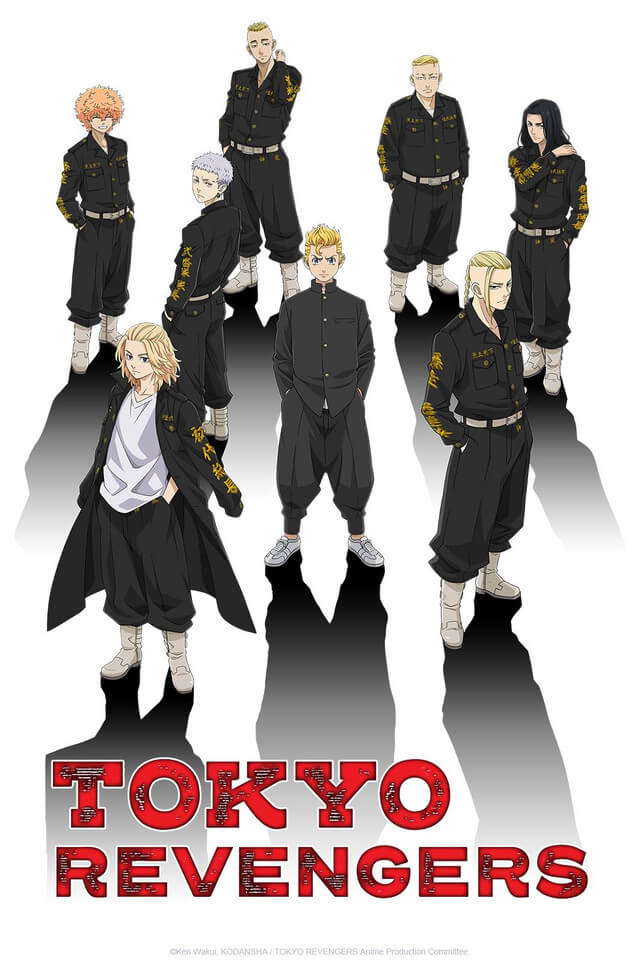 “Takemichi Hanagaki is a freelancer that’s reached the absolute pits of despair in his life. He finds out that the only girlfriend he ever had, in middle school, Hinata Tachibana, had been killed by the ruthless Tokyo Manji Gang. The day after hearing about her death, he’s standing on the station platform and ends up being pushed over onto the tracks by a herd of people. He closes his eyes thinking he’s about to die, but when he opens his eyes back up, he somehow had gone back in time 12 years. Now that he’s back living the best days of his life, Takemichi decides to get revenge on his life.” – Crunchyroll

Gonna be honest, right off the bat I was thrown off by the art. It gave me some weird My Hero Academia mixed with Jojo’s Bizarre Adventure vibes that I just wasn’t down for. Of course, this is just my personal opinion; I can see that it’s well done, the style just isn’t for me. But add in that the show seems to be a middle school gangster version of Erased and you’ve officially lost me.

Tokyo Revengers had some good voice acting, and the animation isn’t bad, but the overall story is something we’ve seen plenty of times. For a time leap/reincarnation show to keep my interest, it has to stand out from the crowd, and this one just didn’t. Maybe that’ll change down the line. Maybe they’ll throw in some crazy curve balls I couldn’t see coming. Or maybe it’ll hit every trope I expect it to and make me regret the time spent on it. Either way, I’m not going to be able to stare at this middle-school-wannabe-delinquent any longer than I already have.

Tokyo Revengers is a little slow to get started. Even once it reveals its time travel premise, it initially appears to be a fairly standard Seventeen Again type of narrative. But it subverts that well enough to be entertaining by having the main character be a little punk-ass brawler instead of a wholesome high schooler. There is basically no real delinquent anime coming out these days, so it’s nice to have a show about rough n’ tumble lads beating the snot out of each other, even if it is tangled up with time displacement sci-fi. Or at least that’s what I was thinking until it subverts the basic time travel formula a second time in the final few minutes. There are now some very interesting plot threads to follow, and the ED showing both child and adult versions of our delinquent boy gang members mean there are all kinds of directions this show could go.

On the visual front, the animation isn’t going to blow anyone away, but the character designs are pleasantly retro and fairly unique for it. Their noses are what really stand out to me, with their considerable size and the sharp upward hook they all have. It reminds me of some 90’s and early 2000s shows, which suits the time period the main character is sent back to.

Tokyo Revengers isn’t an extravagant sakuga-fest, but it is an intriguing bit of sci-fi/fantasy that’s equal parts slice-of-life and thriller. I’ll happily watch another few episodes and see where it goes.

Going back in time to change the future is always a concept I can get behind, especially when it explores Tokyo in two different time periods, but what Tokyo Revengers makes up for in its cool plot and decent visuals, the series lacks in its main lead character–though I’m sure that’ll change as the series goes on.

Tokyo Revengers, in any other anime season, would likely be a standout. Maybe not the most popular, but definitely in the top five. That being said, when there are so many great shows coming, and a growing backlog from last season, Tokyo Revengers falls a bit flatter when compared to the rest, especially in the production. While it’s not bad per se, it’s just serviceable, that’s it.

My main gripe is with the lead character, who is supposed to be 26 years old in his current self, then 14 in his past self, yet looks older in the past than in the “current day.” When taking a peek at the manga designs, this discrepancy isn’t an issue, but in the anime, both designs look way too similar. Mix in that he wasn’t very fun to watch, and you’ve got a recipe for a pretty middle-of-the-road first episode.

That being said though, the concept of being a time leaper going back to save his ex-girlfriend and change his life is interesting enough to keep me invested past the first episode and the fact that the Tokyo Revengers manga is award-winning. There’s something about this series, it just hasn’t come out yet.

You can watch Tokyo Revengers on Crunchyroll and VRV