Important Note: Idea Factory International has announced that a patch will be implemented approximately 4 weeks after Cupid Parasite launches in North America. The patch is said to include fixes to unedited dialogue in Ryuki and Raul’s routes, overall grammar fixes, and text overflow. This review is based on the original master build of Cupid Parasite, and as such certain segments are subject to change after the patch. If you have any questions, please feel free to reach out.

Cute boys, boppin’ music, and a big city vibe–Cupid Parasite (aka CupiPara) has a nice, refreshing taste after back-to-back otome releases with darker and heavier themes.

Hands down, the most notable and memorable part about Cupid Parasite is the music. I love all the different beats, all the references (I will never get “Mr. Sandman” out of my head), and absolutely adore that not only did each boy get their own song, but they have lyrics in English! I quickly found my favorites on Spotify and I may or may not have driven my husband insane singing along to them.

The characters and designs are fantastic. There’s a good mix of scrawny boy-next-door and extra-beefy himbo with room for many of the flavors in-between. Don’t want a tsundere with boyish qualities? Try the tall, fit kuudere. Or maybe the average and toned senpai. Whatever your taste is, there’s sure to be a route for you. 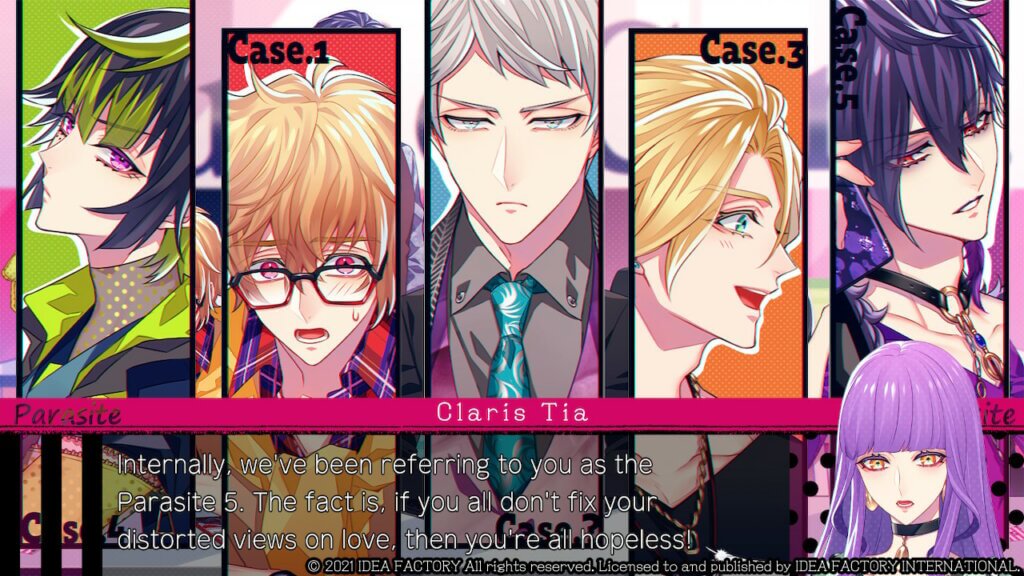 Speaking of routes, the game is fun. This rom-com doesn’t take itself too seriously, and it kind of works better that way. Instead of being an intense title like Piofiore or Olympia Soirée, CupiPara styles itself closer to Café Enchanté. Players looking for a more relaxed game will be happy to find no rape scenes, no blood splatters, and very few descriptions of violence. Even the bad ends aren’t all that bad and mostly revolve around the couple not getting together. Even still, the game seems to be set up in a way that only the true end of each route needs to be reached in order to unlock the other three boys not available from the beginning, meaning those players who like to skip the extra ends shouldn’t have to slug through chapters they don’t want to see.

As far as Best Boys go, CupiPara is sure to have the otome community up in arms, stanning for their favorites. You can’t really go wrong with any of them—Gill, Raul, Ryuki, Shelby, and Allan all have some Grade A husbando material built in. Be ready for them to take you by surprise, though. When I first saw the game, I thought for sure I’d be a big Gill fan, but by the time the final credits were rolling, the two I thought would be my least favorite turned me into a ride-or-die girl for them. Ryuki and Allan, I love you, and I miss you already.

Part of me–a big part of me–is in pain saying this: CupiPara is bad.

I’m not necessarily talking about the plot as a whole, but rather how awful the translation, localization, editing, QA, and programming are. There is everything from missing letters, missing words, wrong words, incorrect punctuation, no punctuation, nonsensical sentences, missing sentences, repeated sentences, text overflow, missing text, misaligned text, text that actually causes the game to crash, sudden name changes, sudden additions of honorifics when there had never been any before, misgendering and incorrect pronouns, continuous flip-flopping between past and present tense, spoken dialogue not matching with the text, and more. Below is a gallery showcasing examples of some of the issues. (No major spoilers are included.)

Seriously, if there is a grammatical issue that can happen in the English language, it’s in this game. I clocked in at over 55 hours of playtime and I couldn’t go five minutes without multiple glaring issues. And unlike other otome that have had subpar releases, the majority of these problems weren’t piled up in the locked routes. Instead, these were spread pretty evenly from the start of the common route to the end of the hidden 6th boy. Though, in a weird twist of events, Ryuki’s route was the worst by far even though he’s one of the three routes available from the start. I was only halfway through the game when I went through the five stages of Otome Translation Grief: annoyance, disbelief, anger, hysterical laughter, and numbness. And I was well on my way to wishing this game would end days before a glitch caused me to lose over 6 hours of playtime.

There are other things I didn’t like: the backgrounds and UI were incredibly busy and felt like they were taking away from the character designs; spoken dialogue on the menu screens aren’t translated (just like in the initial release of Olympia Soirée); and some pictures only take up half the screen, so if you hide the textbox there’s a weird overlap with another image. However, my biggest pet-peeve involves how the game differentiates between spoken dialogue, internal dialogue, and exposition. Unlike most games where it’s pretty obvious thanks to punctuation like quotation marks, CupiPara’s only tell is whether or not the speaker’s name appears in the top part of the textbox. What makes this even more annoying is that the section the name appears in already has other text within it, making it trickier to quickly tell if something gets added. This feels more like bad editing than an aesthetic choice, and it only helps to slow down an already hindered reading speed. There are other issues that, in any other review, would warrant their own discussion. However, the grammar was so problematic that I just don’t have the page space to get into them.

Do I recommend this game? That depends. As it stands right now, definitely not. However, Idea Factory International has announced they’ll be launching a patch for the game about four weeks after its initial release. If the patch is good and fixes the majority of the issues, then yes, I would recommend Cupid Parasite. As a whole, the title is cute and fun. Unfortunately, because of all the issues the game has, I wasn’t able to sit back to enjoy it and take it all in. I can’t tell you if I would have loved this game or been neutral to it, and that’s left a bitter taste in my mouth. It’s going to take a lot of hard work from IFI to make that go away, and though their transparency on the issue has helped a lot, I think the patch will show whether or not they’re up to the task. But until that time comes, hold off playing until the issues are fixed.

A special thank you to Idea Factory for allowing us the opportunity to review this title. Receiving a review copy of this title has in no way altered the opinions expressed in this article.