Whether it was the interesting story, the swoon-worthy boys, or the feisty and actually-has-a-personality Main Character, Olympia Soirée had me head-over-heels in love before I’d even finished the common route.

Before I start diving into things I loved about the game itself, I have to share the good news: Olympia Soirée has hardly any grammatical, punctuation, or text errors. I’m talking about no text floating outside of the textbox, no copy-pasted dialogue, and very few actual mistakes. I think I found two punctuation errors in the first four routes, and maybe five-ish in the last two that mostly consisted of a missing space or a missing word. Either way, this is by far the best quality of an Aksys otome we’ve had in years, and it’s so nice to see our complaints have not fallen on deaf ears.

Okay, on to other things. 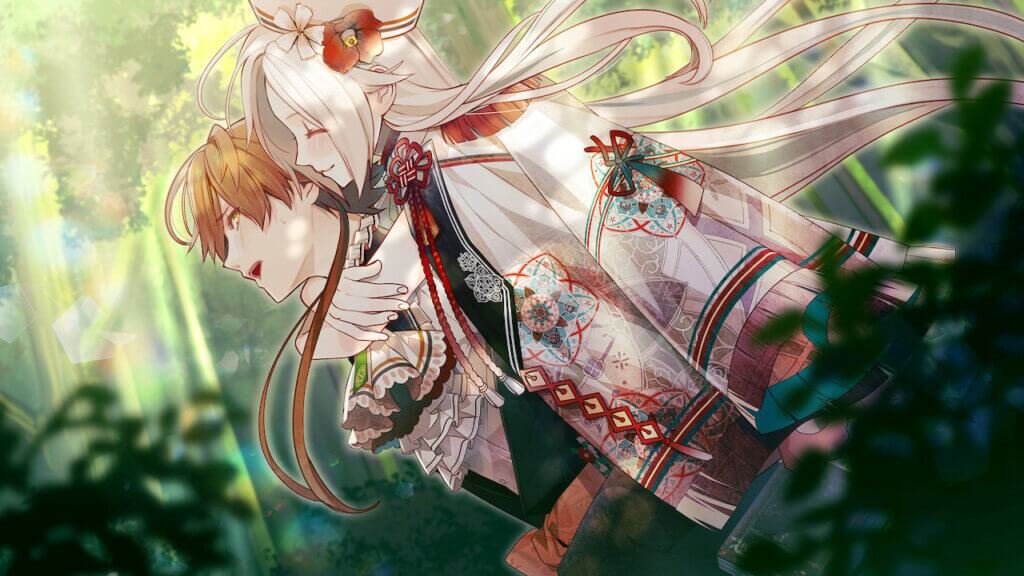 My favorite part about Olympia Soirée is Olympia herself. She’s strong-willed, hardworking, compassionate, and funny. Her resting bitch face sprite had me cackling a number of times, and the fact that she’s in charge of her own sexuality was just *chef’s kiss* magnifique. If you’ve read my other reviews, you’re aware of how much I dislike the ‘I’m an adult and I don’t know where babies come from’ trope, and if you haven’t, well… I hate them. The writer did a good job of having Olympia be naïve and relatable at the same time. She may have gotten flustered when other characters made a sexual joke, but when it came time to show love for her man, she was 100% down for it. There’s a good mixture of scenes where the love interest (LI) would instigate a sexually charged moment and ones where Olympia took control, and this — coupled with the fact that the game doesn’t shy away from two healthy adults both consenting to doing healthy adult things — felt like a dream. I didn’t think I’d ever see something like this in an Otomate or non-AO title, and I couldn’t get enough of it.

When it comes to the boys, they’re an easy win for me as well. While I typically love one or two, kinda like one or two, and mostly dislike the rest, there were only two LIs in OS that had me feeling meh on their routes. (Sorry Tokisada and Himuka. You just didn’t do it for me.) Of course, those are personal feelings, and what I found too sweet or clingy, someone else may find just right. What I can say objectively, though, is that each LI brings something different to the table. You’ve got your tsundere, your kuudere, and more. Couple that with some Grade A voice acting and you’ve got more than enough reasons to play this game behind closed doors. It was fun, too, seeing how the game took some twists and turns with the characters. I began with Riku’s route thinking he’d be my least favorite of the six, but he ended up surprising me and landed in my top two. 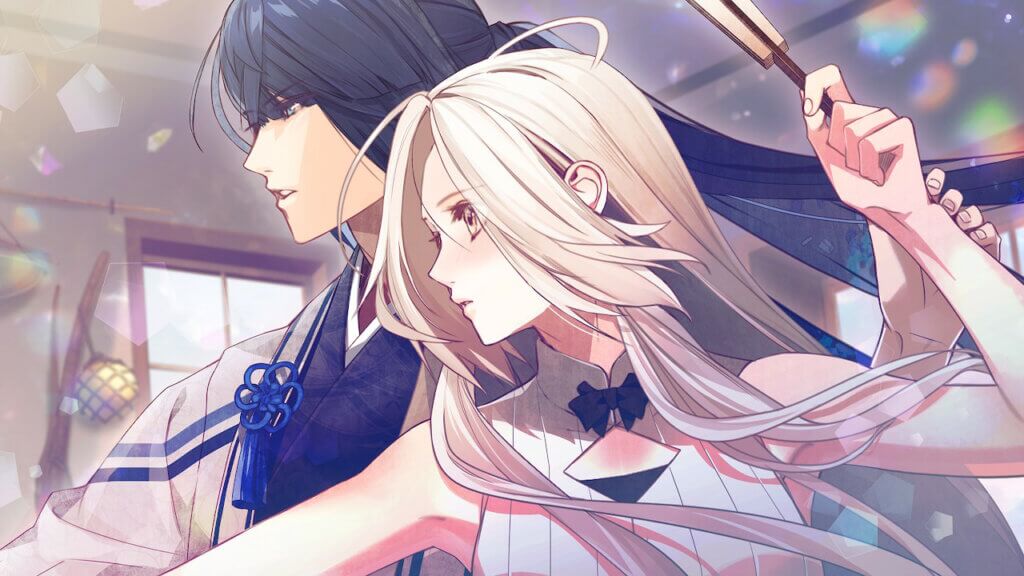 I really enjoyed the story. As a whole, the world of Tenguu Island is misogynistic and oppressive. Those on the surface see themselves as greater than their Yomi dwelling counterparts because they have the most vibrant and beautiful colors, yet their lives are full of unwanted marriages, sickness, and death. And though the people in Yomi are discriminated against and will never see the sun, in other ways they are more free than those on the surface. It was fun and heart-wrenching to explore this false Utopia, and it was refreshing to see every main character fight against this oppression, especially Olympia. She recognizes that she is given special privileges because of her color class, she constantly states that she shouldn’t because she’s no different than Tenguu’s other citizens, and she always stands up for those who are looked down upon. As Olympia put it, “There is no disgusting color.”

As much as I loved this game, there are some bits and pieces that keep it from being perfect, though most will be personal preference.

While most of the CGs are absolutely wonderful, it’s easy to see which ones received more love than others. More than a few had Olympia looking like she was dead inside, and a couple of the spicier scenes came off a bit awkwardly. This is even true for the backgrounds. Whether it was a style difference between multiple artists or time spent on each backdrop, I couldn’t tell you. Either way, the variances are easy to spot, and not in a good way. 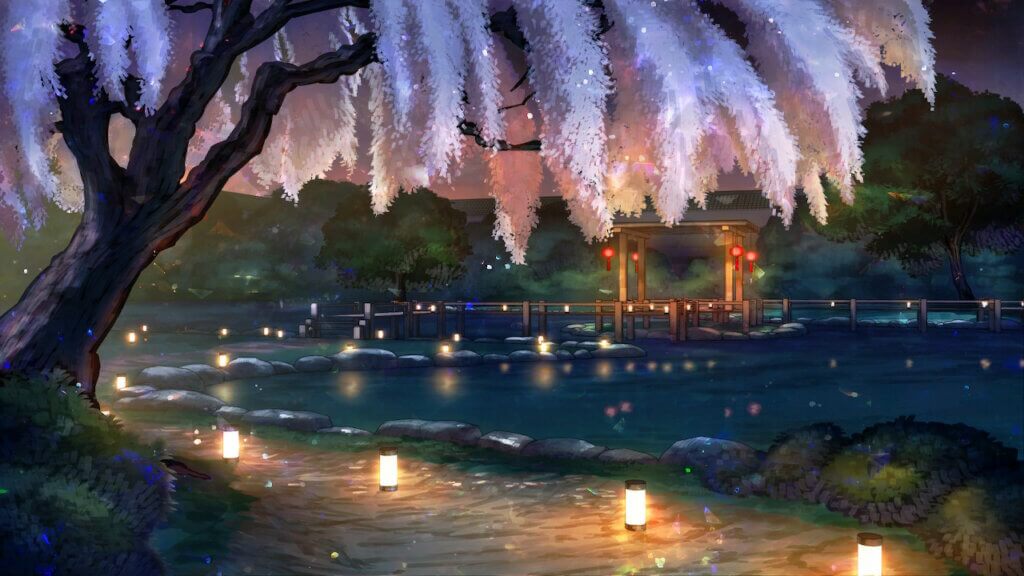 The game has more than earned its M rating, due largely in part to its sexual assault/rape scenes. While I don’t think Olympia Soirée is quite as bad as Piofiore: Fated Memories was, this game definitely has its fair share of problems. I can handle a game having this sort of content if it’s treated with the appropriate seriousness it deserves, and for the most part, OS does a good job in its handling of those situations. However, this leads into the only thing I cannot stand about Olympia as a character.

(Minor spoilers ahead.) As a woman of the White, Olympia has a special ability to protect herself from harm, but almost every time she finds herself in a situation where she should use it, she holds herself back because she doesn’t think it’s right to use. This really got on my nerves for a multitude of reasons and honestly made the entire plot point of her having this ability pretty useless (not to mention a tad bit insulting). Why include something and continuously bring it up in the game if you’re never actually going to do anything with it, especially when it’s needed the most? The whole thing screams ‘gotta keep the maiden pure’, and since they already made Olympia a normal horny adult, why not let her be a badass and go all in on protecting herself, too? (End spoilers.)

The last thing that I wish was different was the amount of time spent on each major plot point. While I thought most of the romances were well done and the world-building was great, as each route gets closer to completion, less time is spent on overarching plots. More often than not, the route ends with the romances feeling pretty satisfying, but leaves a ton of dangling threads for most everything else. I think this could be wrapped up really nicely with a Fandisc, but the fact these things weren’t resolved in the game was a bit disappointing.

The Questionable (Minor Spoilers Ahead)

To start with, the game has been criticized for its color caste system long before a localization was announced, condemning it for having White as the highest ranking and Black as the lowest. There are obvious implications to that, and this alone may keep people from playing the game. While I am in no way the right person to discuss how the game and translation handles this topic, I personally thought the team working on the game did a good job of showing everyone who believes in the caste system to be an awful bigot. However, I’m aware that there are things I may have missed, and I would urge people to play the game for themselves and to read reviews by BIPOC otome players to get a better view of this issue.

Another potential problem is with the outright misogyny experienced throughout the game. Olympia is constantly being told by those around her to quickly find a husband, start popping out babies, and to stop devoting her time to useless things like reading, and the game does revolve around her trying to find her soulmate to do just that. Still, Olympia pushes back on many of these naysayers. She’s unwilling to choose someone randomly or based on the color caste system, instead forcing those around her to accept that it’s her life and she will do things on her terms. And while many of the side characters tell her she has a duty to preserve her color, this only partially factors into her decision. There’s a great quote from her after being told outright it is her duty to bear children and repopulate the Whites: “I was not born to fulfill that role for others. I would find my husband and have children because that was the life I wanted to live.” Even still, there are a plethora of side characters and subplots treating women as nothing more than breeding machines, and some people may not be okay with playing a game like that. I personally enjoyed seeing Olympia go through a form of culture shock as she discovered how Tenguu Island worked, and her interactions with characters as she tries to promote change and equality were nicely done. But again, this is one of those topics where I think everyone needs to come to their own conclusion based on their own experience with the game.

Olympia Soirée is my favorite otome release of this year so far. The story, characters, art, and voice acting are fantastic, and Olympia herself is a breath of fresh air. I loved seeing her fight for what she believes in, work to bring change to Tenguu Island, and watch her fall in love for the first time over and over again. While some of the topics in the game are tough to swallow, I think most otome fans can find something to enjoy in this title.

Game Information: Olympia Soirée is available on the Nintendo Switch store or via GameStop.

A special thanks to Aksys Games for allowing us the opportunity to review this title. Receiving a review copy has in no way altered the opinions expressed in this article.