The spring anime season is upon us, so it’s time once again for First Impressions. For those unfamiliar, here’s the deal: before the start of each new anime season, our readers vote on what series they’d like us to cover, and we review the first episode of the three series with the most votes. In this season’s case, it will actually be four shows, since we had a tie! Those shows are To Your Eternity, 86 EIGHTY-SIX, Blue Reflection Ray, and Tokyo Revengers. Of those four, 86 EIGHTY-SIX was the third to air. 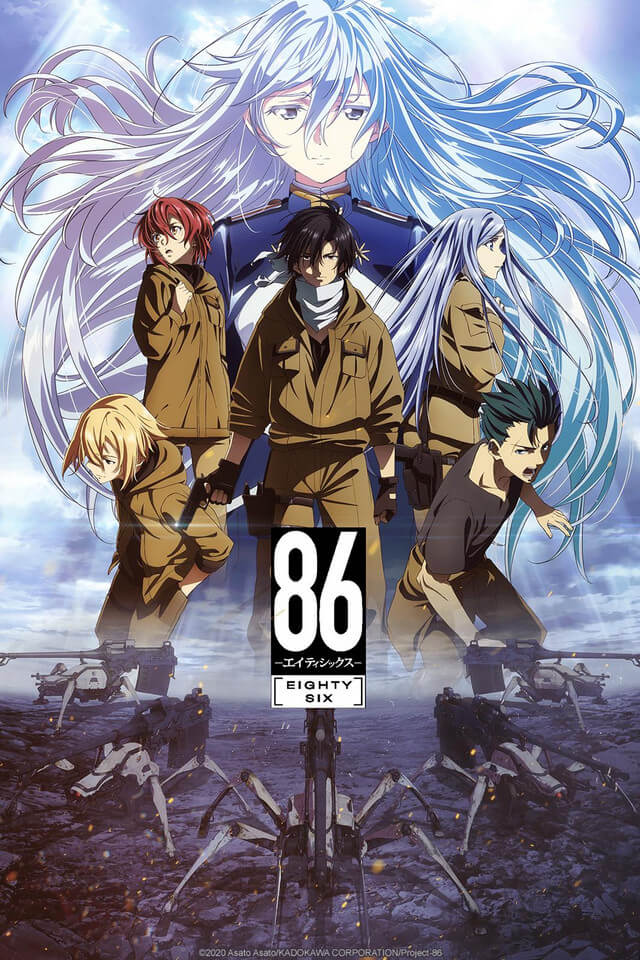 “Called “Juggernaut,” these are the unmanned combat drones developed by the Republic of San Magnolia in answer to the attacks by the autonomous unmanned drones of the neighboring Empire of Giad, the “Legion”. But they’re only unmanned in name. In reality, they are piloted by the Eighty-sixers—those considered to be less than human and treated as mere tools. Determined to achieve his own mysterious ends, Shin, the captain of Spearhead Squadron, which is comprised of Eighty-sixers, continues to fight a hopeless war on a battlefield where only death awaits him.” – Crunchyroll

Guys, this might be one of the big series this season.

With great art and voice acting, an intriguing premise, and just enough world-building to have you theory-crafting in the first five minutes, episode 1 of 86 was an immediate win for me.

Fans of shows like Code Geass and Sword Art Online Alicization will immediately fall in rhythm with 86’s plot: You’ve got a group of privileged people living in utopia, believing they’re better than everyone else and waging some sort of holy war with A.I. controlled spider mechs that have giant-ass guns strapped to their backs. Only the A.I. has a little more flesh and blood than the government would have the general population believe. Of course, everyone living in utopia who’s aware of the actual situation sees the 86’s as little more than lab rats, and they’re happy to pretend the robots they lead are truly unmanned. Except, of course, our heroine. She’s beautiful, smart, affluent, beautiful, the youngest to ever reach her position, has an actual heart, and she’s beautiful. You know, the typical tropes. When she’s suddenly assigned to be the handler to one of the most important squadrons fighting on the front lines, she readily accepts the position. Problem is, every single one of her predecessors either left, or killed themselves after working with this group. Dun-dun-DUUUUN.

So yeah, it’s pretty easy to see how this show is going to play out, but that doesn’t take away from how good of a watch episode 1 was. I will definitely be adding this to my queue to keep up with, and I’m pumped to see how crazy this show will get.

86 looks like it will have a lot to say in regards to race, social status, and class, blanketed within a nuanced war of mechs. How it will convey its message remains to be seen, but I’m hopeful this series can strike a good balance between commentary and action-packed battles.

We’re introduced to our two leads, Vladilena “Lena” Mirize and Shinei “The Undertaker” Nozen who represent two different worlds fighting the same war. The first episode does a great job at depicting who they are and where they come from. Lena is a responsible Handler (or commander) of the Spearhead squadron who must work with the underprivileged 86 –  a group of minorities forced to fight for the republic. She sympathizes with the group even as her own people disregard the 86. Shinei, meanwhile, is the quiet leader of his squad and we’re shown he won’t hesitate to put down one of his own if the situation calls it. Hence, that’s why he’s named “The Undertaker.”

It’ll be interesting to see how the relationship between these two evolves in later episodes and how Lena will connect to her new squadron. I’m often bored by military-styled anime sometimes when they don’t focus much on their core characters and instead focus on technical jargon for weaponry or long-winded exposition dumps. Overall, this was a nice premiere and there’s just enough of a cliffhanger for you to return for the next episode.

86 EIGHTY-SIX is an anime with Something To Say. The way it chooses to say it is very hamfisted, but I appreciate that it’s even trying. The idea of “politics” in anime sets so many people off these days that many just deny that it ever even happens. So I’m glad that a show like this, that is brazenly, undeniably political, exists. Time will tell whether it sticks the landing with its message.

Aside from its screamingly obvious human rights themes, 86’s approach to worldbuilding and doling out information is otherwise very subtle. Details about the disparate cultures of both the high-class major and her officer cohorts, and the second-class citizens in the 86, are presented without info-dumping, which in my experience is unusual for novel-based anime. Plenty of details are left unexplained, but there are enough hints that you can speculate, which helped to hook me in rather than just leave me confused.

The action in 86 is intense and beautifully animated, but it also takes up only a tiny portion of this first episode. Scenes out of battle are much more workmanlike in their level of detail. It doesn’t look bad by any stretch, but the difference is noticeable. The character designs are not particularly distinctive, but they also aren’t bad by any means. I do hope the animation team gets the space to flex a little bit more, but the show absolutely looks good enough to sell what it’s trying to sell. And the directing and “camera” techniques used are very Hollywood, which contributes to the big bombastic action movie vibe it’s going for.

86 is off to a very promising start. It’s hard to say if it will fulfill that promise, but I’m interested in seeing it try. I’d recommend checking out at least the first few episodes.

There’s a lot going on in 86 EIGHTY-SIX that is plain just not understood by the first episode–and that’s both a strength and weakness. On one hand, you’ve got a show that will dive deep into the complexities of using not racial-fitting children as “drones” for a war that will be one in just “two years.” On the other hand, that deep dive will be as in-depth as the entire series will let it. This means from a first episode standpoint, it’s hard to judge whether or not 86 EIGHTY-SIX will become one of the great political dramas, or falter in its message as the episodes play out.

On the production front though, the staff at A-1 Pictures under the direction of Toshimasa Ishii, known for being an assistant director on Erased. Funnily enough, I just remembered that fact right now as I write this, which makes the direction and feel of 86 EIGHTY-SIX make a whole lot more sense. With that fact in the back of your mind, 86 EIGHTY-SIX looks just as good as Erased did, but maybe without that Tomohiko Ito (director of Erased, The Millionaire Detective – Balance: UNLIMITED) flare.

Honestly, I probably won’t be watching any more of 86 EIGHTY-SIX right now. Between the pretty grim storyline and the themes that need more than 20 minutes to be explored, I’ll be waiting for a couple (or cour) to be out to take another gander at the series, especially when I’ve already seen multiple anime tackle the whole child soldier aspect before.

I actually was part of the “I read the light novel first before watching” crowd, and I couldn’t contain my excitement when I watched the mechanical robot fights finally visualized in a way my brain could not (seriously, shout out to that CG animation. It is clean). Without exaggerating too much, from the first frame to the last, everything was a wonder to me.

86 EIGHTY-SIX does an extremely good job setting the tone of the world: huge disparities between races/classes shown through types of food, clothing, and amenities. Yet, there are moments where there aren’t any disparities at all, such as the way both the 86 and the “higher-class” laugh and joke around. This first episode starts off strongly and is sure to set expectations for the rest of the season.

We are also introduced to the two protagonists of the anime, and one of them is very clearly stoic. As we aren’t privy to what their thoughts are, the minor changes to their facial expressions said quite a lot despite no verbal cues. This anime is truly about the human side of war, rather than the technological advances, so I’m glad the animation studio put special care into what we can see on the characters’ faces.

I cannot wait for more if it wasn’t obvious enough.

You can watch 86 EIGHTY-SIX on Crunchyroll and VRV.