It’s the end of the Spring 2021 First Impressions! For those unfamiliar, here’s the deal: before the start of each new anime season, our readers vote on what series they’d like us to cover, and we review the first episode of the three series with the most votes. In this season’s case, it was actually four shows, since we had a tie! Those shows were To Your Eternity, 86 EIGHTY-SIX, Blue Reflection Ray, and Tokyo Revengers. Of those four, To Your Eternity was the fourth and last to air. 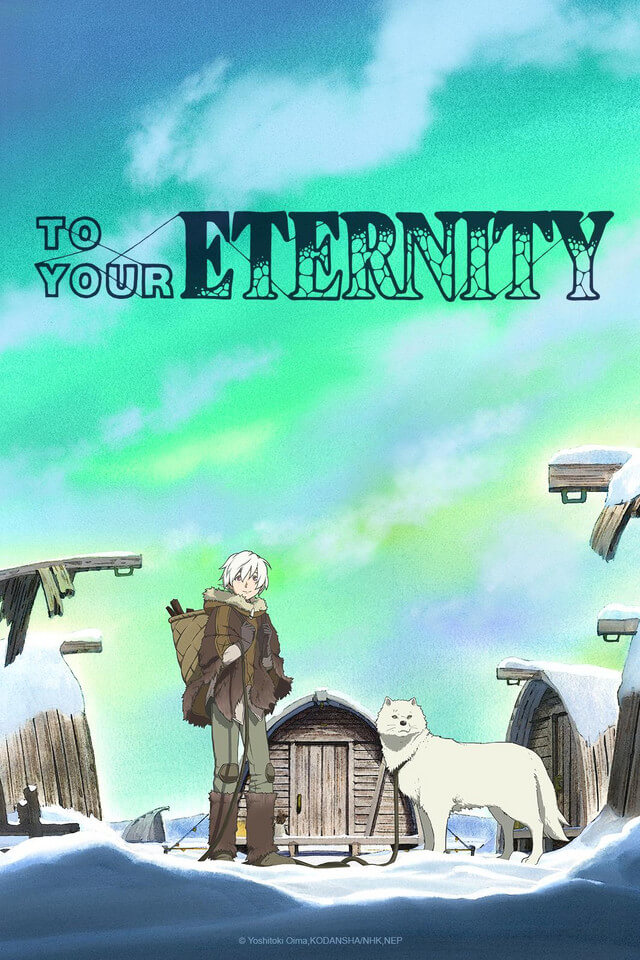 “In the beginning, an “orb” is cast unto Earth. “It” can do two things: change into the form of the thing that stimulates “it”; and come back to life after death. “It” morphs from orb to rock, then to wolf, and finally to boy, but roams about like a newborn who knows nothing. As a boy, “it” becomes Fushi. Through encounters with human kindness, Fushi not only gains survival skills, but grows as a “person”. But his journey is darkened by the inexplicable and destructive enemy Nokker, as well as cruel partings with the people he loves.” – Crunchyroll

Man, it’s been a long time since an anime made me cry, but To Your Eternity did it episode 1.

The show has beautiful artwork, great voice acting, and a unique and deep storyline. Top it off with Utada Hikaru serenading you as tears cascade down your face without stopping, and you’ve got yourself a fully-fledged, perfect-grade Anime of the Year title that everyone will be talking about.

It’s been such a long time since an episode 1 of anything I’ve watched has felt so fully formed, so deep, and been as gut-wrenching as this one was. The characters were so well placed and detailed, and the worldbuilding was so well done that this episode honestly felt more like a movie. In terms of time, I knew this boy less than I knew the fingernail polish I put on just before sitting down to watch it. But man, I cried like a little bitch after those twenty minutes for him and his story. Nothing I can say will do the episode justice. Nothing. Sure, I could go on and on about how each scene depicts a dozen different emotions and details without saying a word. I could gush about how every word in the monologue is precisely placed to evoke the feel of the scene and does more for the worldbuilding than anything ever has in any show. I could tell you how the voice acting truly brought the characters to life in the most raw and powerful way I’ve seen in a long time. But again, this doesn’t do it justice.

I know this show isn’t going to be for everyone. It takes the right mindset, moment, and personality to be able to watch something that you know is going to tear your emotions to shreds and leave you a hollow husk after it’s finished. So for those that can’t stand stories of pain and hardship, run. Run as fast and as far away as you can.

But for those that are able to handle it, please. Grab some tissues, take a seat, and enjoy.

A simple premise can lead to a great premiere and To Your Eternity hits the mark for that accomplishment. It’s also one hell of a tearjerker and considering it’s an adaptation from the creator of A Silent Voice, I’m not surprised.

The anime follows a nameless orb that is dropped into the world in order to experience life. The orb is able to take on any forms it’s closest with, provided it meets the standard of stimulation. It meets a white wolf first in this episode, taking on its form as it encounters a lone boy living in the cold open. The orb lives and travels with the boy, opening the opportunity to explore new frontiers.

To Your Eternity reminds me so much of anime like Kino’s Journey, Wandering Witch Elaina, and Girl’s Last Tour. A common theme between all of them is the focus on one central character, traveling to different places, meeting many people and personalities, and learning more about themselves along the way. It’s about the journey, not the goal with these anime and To Your Eternity may follow this in later episodes. One thing I think distinguishes this from the rest is that there’s more potential to cry and question your thinking after each episode. The music and the animation are added bonuses in what makes To Your Eternity so special and I’m excited to learn how the character responds to the different characters it meets. Eternity is forever and the anime’s story promises to be both heartbreaking and bittersweet.

Psst. Hey kid. You wanna cry? I have just the thing.

I’d read the manga previously, so I thought I’d be immune, but To Your Eternity’s first episode still managed to make my eyes a little sweaty. It’s a self-contained tragedy with just a touch of horror, wildly unique, and expertly told. The writers put a lot of faith in the viewer to pick up on things, and I loved all the little details about the culture the main characters inhabit, however briefly, that the show gives us but doesn’t bother explaining. I almost wish there wasn’t an omniscient narrator because I think it undermines the otherwise excellent visual storytelling just a bit (although if I remember correctly there’s a very good reason for having a narrator that becomes clear later on).

Speaking of visuals, the show isn’t some lavishly produced, cinema-quality, Sistine-chapel-come-to-life type of masterwork, but it is extremely well directed. I liked almost every single choice they made as far as what to show when and how. There were a couple of spots where there was this weird jump cut zoom out thing happening, and I’m not sure what intent there was. But otherwise, the show perfectly captured “it” and the boy’s feelings at any given moment, with some really affecting and occasionally disturbing visuals.

Suffice it to say I’m a big fan of To Your Eternity. It is like nothing else out there, miserably sad, and super good. Watch it.

In a season that already has such a stacked line-up (thanks COVID), I think we’ve found the most heartfelt and emotional series of the season. This is no surprise as To Your Eternity comes from the mind of A Silent Voice manga creator Yoshitoki Oima, with director Masahiko Murata at the helm, known for his work on the brilliant sports TV anime Baby Steps. Japan’s national broadcaster NHK is also producing the series, which have been known to just let their shows breathe as much as they need to.

That breathing room let the first episode of To Your Eternity deliver a somber 25-minute episode that showed just how cruel the world can be–and from the preview, the second episode seems to be doing much the same. What I liked though wasn’t that To Your Eternity tried to force the viewer to be sad through common anime manipulation techniques, in fact, I smiled quite a lot through the episode, but just let the story tell itself. And what a wonderful story it was.

On the production side, everything is up to par. The photography was subtle enough to not take front and stage, yet not let the animation look flat. The music was subtly subdued in the right moments, with it swelling up at the right time.

At the moment, it may be hard to compare To Your Eternity to any series that has preceded it. It could turn to be like Kino’s Journey or That Time I Got Reincarnated as a Slime, but for now, I’m just going to sit back and enjoy what’s to come.

I came to this anime blind and was struck by the overwhelming simplicity of the backdrop — white, merciless snow. Though I had some inkling as to how the episode would end, it did shock me quite a bit. To Your Eternity’s synopsis doesn’t do much justice in enticing viewers (other than being from the same creator as Silent Voice), but to anyone who does, there is a surprising amount of tension and curiosity despite the lack of enemies and other characters.

Also, I hope to find out more about the main narrator (looking at you, Mr. Kenjiro Tsuda).

You can watch To Your Eternity on Crunchyroll and VRV.