Welcome to the third and final installment of our Summer 2020 Anime First Impression series! For the uninitiated, here’s how it goes: before the start of each new anime season, our readers vote on what series they’d like us to review the first episode of, and we cover the three series that get the most votes. This season our Top 3 were Deca-Dence, The God of High School, and Rent-a-Girlfriend, with Rent-a-Girlfriend being the last of those to air.

Here’s how Crunchyroll describes the series:

“Kinoshita Kazuya is a 20-year-old failure of a college student. He managed to kiss his girlfriend once, but was dumped after a month. “Ugh… Damn it. I never want to go through that again.” Completely spiteful, Kazuya uses a certain method to date a girl. He goes to their meeting place and suddenly hears, “You’re Kazuya-kun, right?” A beautiful girl brushing her long, black hair behind her ear was there, smiling at him. Her name was Mizuhara Chizuru. Something real is born after just a single rental! A reckless rom-com filled with love and excitement is about to begin!” 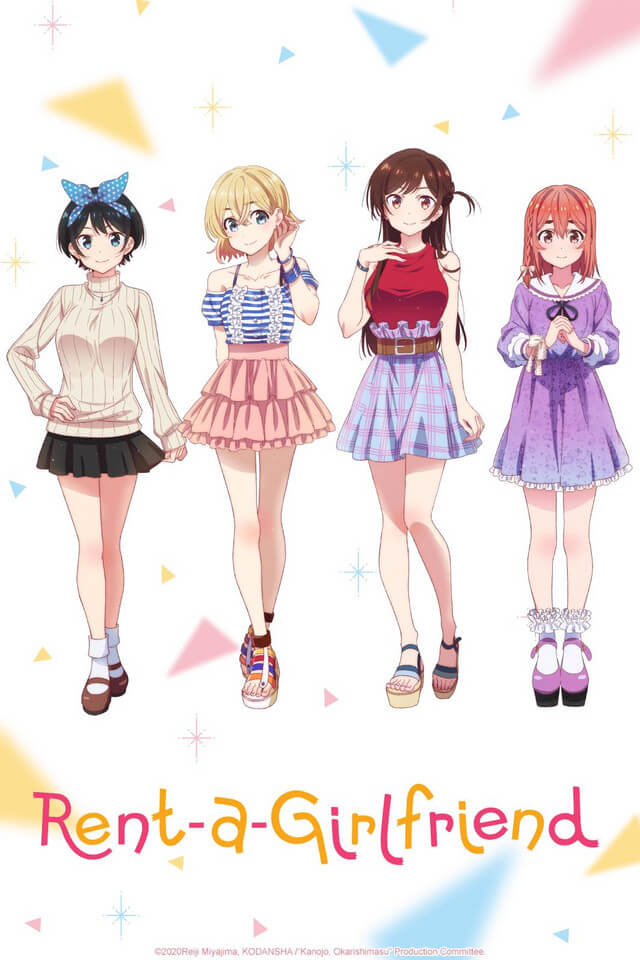 I’ve actually read parts of the manga before the anime aired and the adaptation, so far, has been straightforward. Dorky, heartbroken college student Kazuya turns to a dating rental service after being dumped by his girlfriend. It is there he meets the beautiful Chizuru who becomes the perfect girlfriend – for a price.

Rent-a-Girlfriend will feel like watching characters dig themselves into a deeper hole with every lie told. And each lie brings other characters that fall right in with the protagonist. Kazuya is all the right amounts of awkwardness and cringe befitting a guy like himself. This makes him just relatable enough to see how his relationship with Chizuru grows.

Overall, I enjoyed this first episode. It’s interesting to see how he and Chizuru have kept the lie going and I’m looking forward to seeing how this drives the series. Not to mention there might be other women gunning for Kazuya’s heart down the road. Strap in folks: I think I smell another waifu war.

With cute art and a hilarious sounding plot, I had high hopes for Rent-a-Girlfriend that mostly all fell short after meeting the protagonist, Kazuya. While I expected Kazuya to be a bit down on himself or lacking some self confidence after being dumped by his first girlfriend, I was fully unprepared for the amount of self-deprecating, sexist, guilt-trip riding content there was in this first episode.

Kazuya is almost inconsolable after his girlfriend of a single month dumped him, and instead of going out there and trying to find someone new, he utilizes the Rent-a-Girlfriend service to cure his immense loneliness (that he himself said he might die from). And when the date goes super well and he realizes this cute girl isn’t actually his, he takes it out on her for being ‘too perfect’. The amount of neck-beard feels I got turned me off from the show pretty quickly (though I did really enjoy Chizuru’s character).

Maybe I’m being too hard on the guy. Maybe he was just in a really rough spot that I couldn’t relate to and he didn’t handle his emotions very well. Maybe he’s just that socially uneducated. Maybe what came off to me as his attempt to horribly manipulate a girl is actually very different in the original language and when taking into account Japan and the United State’s cultural differences. Or maybe I’ve met one too many real-life Kazuya’s and just couldn’t stand his character. Whatever the case may be (and despite how much I love this genre of anime) Rent-a-Girlfriend wasn’t a winner for me.

Rent-a-Girlfriend was the anime I was most looking forward to this season. The manga, written and drawn by Reiji Miyajima, has some of the best art in manga at the moment, with some of the most up-to-date fashion, styles, and situations you could want from a modern manga, with a modern Tokyo story. Yes, you can rent a girlfriend in Tokyo, and a lot of people do it. No, it is not sex work, it’s purely wholesome, though maybe not something you tell your parents about.

On the anime side of things, the first episode really captured the spirit of the manga series, as well as giving it its own flair. The detailed and adorable animation was only punctuated by the great voice acting and superb storyboards, which lent itself to the humor I’ve come to know and love from the manga series.

The opening animation – which was seen at the end of this episode – blew me away. I loved the little TikTok dance character animation that was storyboarded by series director Kazuomi Koga and animated by Odashi. It perfectly encapsulated little quirks of the characters we’ll soon get to know.

So far, Rent-a-Girlfriend has been my favorite first episode. For comparison, if you liked the rom-com aspects of the Nisekoi anime, you’ll probably love Rent-a-Girlfriend. While yes, there will be a war over who is best girl, and we all know it won’t be Mami Nanami, at least we get a great looking show, with a kick-ass soundtrack, and lovable characters.

Episode 1 of Rent-a-Girlfriend made me think much harder than I expected it to. It’s nominally a harem show, and while I genuinely like harems, I don’t watch them for deep characterization or incisive social commentary. I watch them for the cute girls. Rent-a-Girlfriend promises a few of those, but it definitely is trying to have a little more going on under the hood. Time will tell whether it actually does.

Kazuya is an infuriating main character and, in my opinion, the biggest roadblock to the show’s success. I can’t blame him for being frustrated with the abrupt breakup that kicks the story off, but he acts on that frustration in ways that seem guaranteed to make things worse. After paying for a pretend girlfriend, he has a flash of self-awareness as he realizes it’s not going to be as fulfilling for him as an actual relationship. But instead of looking inward, he takes it out on the girl he rented. He gives her a terrible review because she did a good job and he liked her too much. He can’t handle admitting his own flaws, so he lashes out at a woman, any woman, whoever is the easiest target. This does not make me want to root for him.

Chizuru, the girlfriend Kazuya rented, is much more interesting. She cold-reads dudes in just a few seconds and then spends the day acting like the exact type of girl they want. She’s a talented improv actress, basically. When she’s not playing the part of a stereotype of demure femininity, she’s assertive and thoughtful and generally seems like a decent person.

The problem is she’s not the main character. I think some kind of reverse harem situation with Chizuru rebuffing a new pretty but emotionally stunted boy every week and making the big bucks for doing so would be a much more interesting show, especially since rent-a-girlfriend is a real job. But the show’s priority is clearly Kazuya and whether he can be salvaged. The girls will just be a vector for his growth as a person.

That’s not to say Rent-a-Girlfriend has nothing going for it. It made me laugh and cringe equally hard, it’s quite well animated, it has a lethally cute TikTok-ish OP, and if Chizuru is not your type there are a few more very good character designs coming down the pipe that may appeal to your tastes. My issue with the show is that it’s full of potential that, based on this episode, I don’t see it executing on. I want it to, though, because I think it could be very interesting, so I’ll probably keep watching it myself (also the girls are cute and I like harems). But it treads too close to an incel-ish “all women are deceivers” type of theme for it to be an easy recommendation.

You can watch Rent-a-Girlfriend on Crunchyroll and VRV.