Welcome to the second installment of our Summer 2020 Anime First Impression series! For the uninitiated, here’s how it goes: before the start of each new anime season, our readers vote on what series they’d like us to review the first episode of, and we cover the three series that get the most votes. This season our Top 3 were Deca-Dence, The God of High School, and Rent-a-Girlfriend, with Deca-Dence being the second of those to air.

“After nearly being driven to extinction by life forms known as Gadoll, humanity dwells in a mobile fortress named Deca-Dence. Built to protect humans from the Gadoll threat, it’s occupied by Gears, warriors who fight daily, and Tankers, those without the same skills. Natsume, who dreams of fighting, meets Kaburagi, an armor repairman. Their chance meeting will shake the future of this world.” 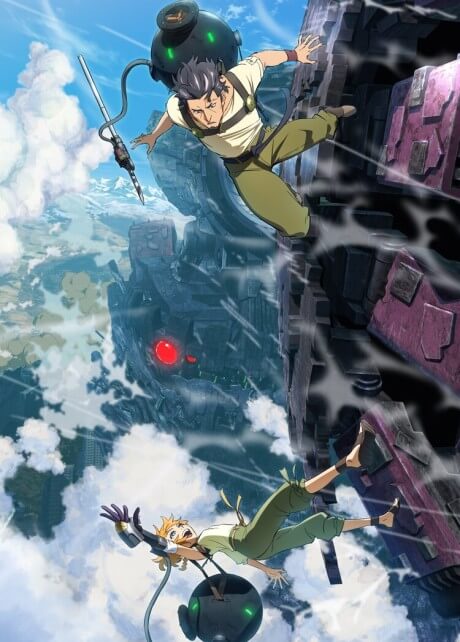 Ah yes. I love me another “humanity is screwed over” post-apocalyptic sci-fi anime. There have been quite a number of titles like these over the past few years, but Deca-Dence manages to stand out a bit from the rest.

The story follows Natsume, whose father was killed in action in the fight against beasts called the Gadoll. She joins the cleanup crew of the giant ship called the Deca-Dence after failing to become a fighter on the battlefield. There she meets Kaburagi, who is not what he seems to be.

While the plot sounds familiar and straightforward, I like the world-building so far and I think it has the potential to expand and really get into how things work and why they are the way they are. Natsume, herself, is a really fun character whose determination drives the story forward and her relationship with Kaburagi is sure to grow.

I feel like I didn’t get that much out of this first episode and I’m waiting to see what they’ll do in subsequent ones. Deca-Dence is an intriguing anime this season, so keep your eyes on it if you like a good sci-fi/steampunk aesthetic.

Deca-Dence starts out similarly to other titles within the same genre: introduce the main character with some sort of tragic backstory, give them the drive to fight off the monsters that are threatening humanity, and hint at the secret plot twist that will shake up the viewers at a later date. Attack on Titan, Darling in the FranXX, Neon Genesis Evangelion, and possibly even The Promised Neverland fans will quickly fall in pace with this newest post-apocalyptic show.

Natsume is a cute main character with a lot of drive and a lot of humor. I had a hard time disconnecting her from Emma from The Promised Neverland, though. Between the character design and personality, the two are almost identical in every way. This was definitely a mark against the show in my book. Paired with art and a core plot point that didn’t stand out, along with a lackluster first episode that didn’t really feel any different from other shows in the genre, Deca-Dence won’t find a spot in my viewing catalog for this season.

Coming into Deca-Dence, I was both very excited to see what was to come, and very apprehensive. With one of my favorite creative teams on the project – the director and scriptwriter from Mob Psycho 100 – making an original TV anime (read: with no source material) in a time where original TV anime doesn’t thrive very well unless it’s from a well-established auteur creator, you could see the predicament I was in.

That’s to say, much like my thoughts on The God of High School, my biggest problem with the episode was that it ended. Gone are the days where I feel like I can watch the first episode of a 13-episode plot and be like, yeah, I’ll like this story. Honestly, I blame Netflix.

In saying that, all the elements for a great series are here. The animation looks good, maybe a little too flat in places, kind of like Tower of God, but with the people that usually work with Yuzuru Tachikawa, that just means more fluid animation later on. The story is interesting enough to make me want to see how the plot unfolds. And the characters were intriguing as to keep me wanting to keep watching them. There’s also a freakin’ awesome moment near the end of the episode that’s bonkers to watch.

I’m interested enough to see where Deca-Dence goes from here – but like original series’ before it that are set in a post-apocalyptic Earth, it could go either way in the long run. I hope not though, because I love Tachikawa.

Deca-Dence feels like a synthesis of several recent popular franchises, Attack on Titan being an unavoidable reference point for sure. Deca-Dence shares its “large strange creatures suddenly attack” core premise and high speed, three-dimensional action style with Attack on Titan. Deca-Dence shares its “giant rolling city” setting with Mortal Engines. It also shares quite a few elements with Kabaneri of the Iron Fortress and Gurren Lagann.

Note that I’m saying “shares” and not “steals”, because it never feels like a ripoff. Deca-Dence takes only the good parts of similar shows and expertly combines them. And it executes all of these ideas in new, sometimes better ways than the shows it’s arguably pulling from. It helps that the show looks and sounds fantastic at all times, with fluid action animation, inspired set design, music that uses some really interesting vocal ideas, and charming characters and character designs.

The writing is slightly more of a mixed bag, mostly in a way that shows that have a lot of background info but are trying to get to the fun part as fast as possible can be. There’s a clumsy little info dump at the beginning in the form of students reciting their city’s history like some sort of national anthem. Once that’s out of the way, though, the show does a better job of showing, not telling, and leaving some things up to interpretation.

And for all that I said at the start of this about Deca-Dence reminding me of other shows, the exact way that it reminded me of Gurren Lagann blindsided me so hard that my mouth was literally hanging open watching it. If a show that wears its influences on its sleeve like Deca-Dence does can still surprise me, there’s definitely something special about it.

You can watch Deca-Dence on Funimation, AnimeLab, and Wakanim.