The spring anime season is upon us, so it’s time once again for First Impressions. For those unfamiliar, here’s the deal: before the start of each new anime season, our readers vote on what series they’d like us to cover, and we review the first episode of the three series with the most votes. In this season’s case, it will actually be four shows, since we had a tie! Those shows are To Your Eternity, 86 (Eighty-Six), Blue Reflection Ray, and Tokyo Revengers. Of those four, Blue Reflection Ray was the first to air. 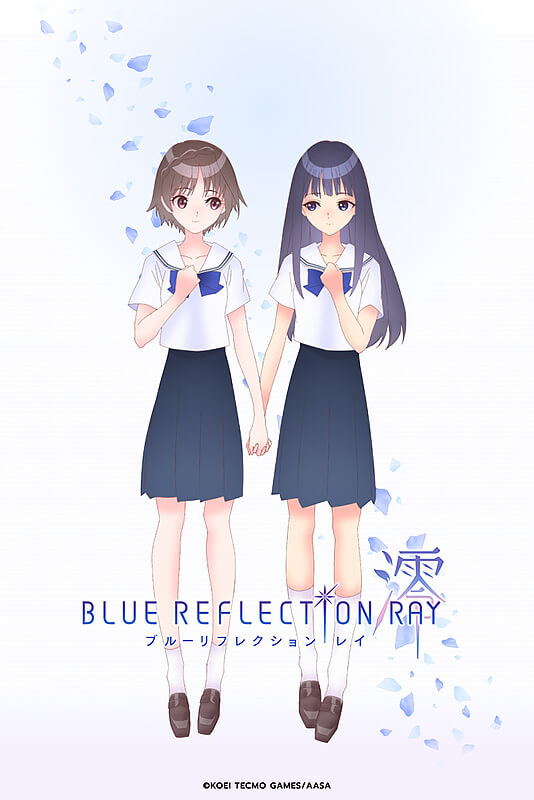 “Optimistic Hiori can’t turn away anyone in need. Awkward Ruka can’t seem to make friends, even when she tries. But these two do have one thing in common: they’re both magical girls called Reflectors! Together, this unlikely pair will use their powers to help resolve emotional struggles and protect the Fragments of people’s hearts.” – Funimation

When I heard Blue Reflection Ray was a thing, I was a little optimistic since I’m decently familiar with the game. (The husband played it when it came out and I casually watched him platinum it.) The first episode definitely evoked similar vibes to the game–the art style, the girls, and of course the story. But I can’t say this was a great translation from game to show.

While the artwork is very pretty, it does better as still images than moving scenes. I couldn’t pin if I was a fan of the style or not since some images look like a pretty shojo and others look like a cheap dream/flashback sequence. Similarly, I couldn’t get in tune with the story. The massive 3D mecha-monster in the beginning, and the magical girl transformation and action-y bits were super interesting, but the entire middle was pretty boring and extremely somber.

There wasn’t any comedy like Sailor Moon, but there also wasn’t enough devastation like Madoka Magica to compare it to other magical girl shows, and the middle ground it found between the two just couldn’t keep my attention. While I’m sure the show will pick up at some point if it sticks to the game’s major plot points, I’m not willing to cross my fingers and push through episodes holding onto that hope.

Strap in folks because we got another magical girl anime. And it’s a two cour series as well. Going into the first episode, I wasn’t exactly sure what to expect considering all I knew about it was that it was based on an RPG game. Anime adaptations of these can be hit or miss and Blue Reflection Ray left me with some mixed feelings.

We’re introduced to the socially awkward Ruka who just transferred to her new school. Later, she bumps into the energetic Hiyori, who wants to help anyone in need. When their surroundings suddenly change, they realize that they’re somehow connected through some mysterious rings. These rings power the magical girls of this universe who are called Reflectors.

After watching the first episode, I’m optimistic that this will be a decent anime down the stretch, but first impressions matter. It frustrates me that Blue Reflection Ray leaves a lot more questions than answers and I wish we could’ve gotten more information about how these Reflectors operate.

Instead, we’re given focus on Ruka specifically as we find out about her past and inability to connect with people. Hiyori gets some attention in the back half, but aside from a vague memory of her big sister, I don’t really know much about her. We’re promised more details in the next episode, but I’m hoping the relationship of Ruka and Hiyori develops over the next couple of episodes.

Overall, it was a mixed kind of premiere, but with some promising narrative developments. The animation and character designs might also throw people off because of the uncanny look of the characters’ faces. I think I’ll take a wait-and-see approach with this anime.

Blue Reflection Ray is a classic girl-meets-girl story. Ruka is extremely socially awkward. Her parents abruptly move overseas for work, so she transfers to a boarding school in the middle of the year. She struggles to make friends and fit in. But then she meets her roommate Hiori, who is the freest of free spirits – running off in the middle of the night, coming back through the window, and acting very familiar with Ruka despite having just met her. Hiori and Ruka are polar opposites, but they get along surprisingly well. Could it be the beginning of a romance? Only time will tell. Hopefully, the completely inscrutable magical girl stuff involving color-coded rings, fated partners, Very Important Capitalized Terminology and eeeeeeevil kinksters doesn’t get in the way.

Blue Reflection Ray didn’t grab me very hard, unfortunately. The central relationship is sweet and cute, if not particularly unique. This goes for the magical girl stuff going on in the background too, except that manages to be confusing as well as unoriginal. It feels like a tangled mess of previous shows’ ideas and is very much less than the sum of those parts.

I’m also not a huge fan of how the antagonists are portrayed. The only villain we see is an aggressive lesbian stereotype, but she’s also apparently a masochist. When she tries to abduct one of the side characters, and that character hits her while resisting, she drops an “ooh I like that, harder next time” kind of line. I think it sucks when kink and villainy are conflated like that. I also got some “pure chaste yuri vs mean horny lesbians” kind of vibe from the whole interaction, and if the show ends up being an anti-sex screed I think that would suck too.

Visually, while the animation was pretty limited, I liked all of the character designs except for the main two girls’. Most of the time the characters are in their school uniforms, but the couple of casual outfits seen are attention-grabbers and I appreciate that variety in the characters’ fashion choices. I also like the stained glass insect motif that the magical areas they find themselves in and their post-henshin outfits have. It’s the most interesting thing about the show.

But neat visual tricks are not enough to make me want to watch a show long term. There has to be a plot hook, and there just wasn’t one in Blue Reflection Ray. It’s a no for me.

You can watch Blue Reflection Ray on Funimation, AnimeLab, and Wakanim