Our Summer 2019 Anime First Impressions series was a hit, so we’re back for Fall 2019! Before the new season of anime started, we ran a poll asking our readers what new non-sequel, non-spinoff anime series they wanted us to investigate. Over the next few weeks our team of writers will be watching the first episode of the poll’s top 3 shows and telling you if they’re worth putting into your queue. The poll winners were Ascendance of a Bookworm, Africa Salaryman, and Case File No. 221: Kabukicho. Africa Salaryman (also known as African Office Worker) is the second of these to air. 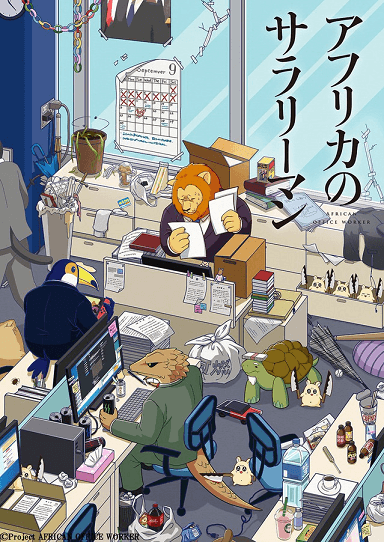 “Imagine your co-workers–a lion, toucan, and lizard! Hey it can happen right? Africa Salaryman is a comedic take on office life of three African jungle animals who could be your potential co-workers in corporate America. It’s full of ridiculous office place antics and hilarious scenarios, that keeps things quite entertaining, while the animals cope with their working environment.”

Now what does the Preview Team think?

Hey, you remember in The Lion King when Simba grew up, left Pride Rock, and then worked a normal, full time office job? Good times.

All jokes aside, Africa Salaryman follows the everyday corporate work lives of Lion, Toucan, and Lizard. These characters make up the crux of the anime’s vignettes, focusing on each of their personalities. Lion is a nice guy working in middle management whose menacing aura leads to many misunderstandings. Toucan is the loud, obnoxious, irresponsible worker trying to find a girlfriend. Lizard is Toucan’s friend, whose had the misfortune of hanging out with Toucan and dealing with his antics.

If you like Beastars and Aggretsuko, you’ll find genuine entertainment in this comedy of animals working mundane day jobs. The animation is a nice mix between traditional and CG, although it might not be everyone’s cup of tea. Regardless, the show takes its animation to wild places in certain scenes. The humor can be downright gross and gory sometimes, but when you consider the animals the characters are based off of, it makes sense. Africa Salaryman is less like Zootopia and more like watching a crazier version of The Office. Pick it up if you’re down to see it.

From the first few minutes – after The Lion King send up – I connected deeply with African Salaryman. As a bearded foreigner in Japan, not only do I sometimes get people looking at me strangely, or have junior-high schoolers literally run away, but also it’s really annoying having brown hair just appear on my nice Salaryman suit! They’re expensive, you know! After those few minutes of deeply empathizing with a lion, we are then handed over to one of the most annoying characters in the show.

Imagine: the most annoying, self-centered, most aggravating person in your office. Then imagine having to watch them try and be likable, whilst they’re monologuing internally about how horrible everyone is. It’s insufferable. That’s the majority of what the episode was. Only once I laughed at his antics. Mind you it was a very hearty laugh, but that’s because I’m weak to crass Japanese puns, not him.

I loved the modern office setting with animals, and being able to see it from another angle than Aggretsuko would be great. I enjoyed every minute where Toucan wasn’t the center of the piece, but if it’s mostly going to be him, then I’m afraid I’m out faster than Toucan leaving work on time.

The art style of African Salaryman was… different. At times it was gorgeous-looking 2D animation, oozing with style, sometimes is was 3D animation that was trying to mimic the 2D style to varying results – looking the worst during walking cycles –, and other times it was an acid trip from the best of “The Beatles” last album. I’ll be giving African Salaryman a few more episodes to see if it scratches my Aggretsuko itch, but if they don’t get rid of the bird, then I’m flying away.

Have you ever told a joke that made everyone around you chuckle slightly and then thought to yourself, “man, that joke was really great. If only I could continue the joke for around twenty minutes”? If so, then do I have news for you: it wouldn’t be funny after five minutes, let alone twenty. That’s the issue with the series African Salaryman. It might have been funny for the first few seconds, but the laughs dries up quickly. The humor of the series didn’t quite float my boat, and unfortunately, the animation didn’t either. The stylistic choices felt too stiff in some parts, and awkwardly overly fluid in others. There were moments that felt like I was watching the series through a glass of water.

It’s a shame, however, that the style and substance weren’t quite there for the series because the voice acting was top notch. The show features heavy-hitting seiyuu that have been in massive shows that dominate each season, such as My Hero Academia. So in moments that weren’t supposed to feel as lackluster as they were, the voice actors came in swinging to make sure that at least something of the show felt worth it.

“Africa Salaryman” is streaming on Funimation.

Be sure to check out our first impression of Ascendance of a Bookworm and Case File No. 221: Kabukicho!