Welcome back for the final Yatta-Tachi First Impression of Summer 2021! In case you’re new, or in case you’ve forgotten, this is how we do things around here: in the week or two before the start of each new anime season, we run a poll for our readers to vote on what series they’d like us to cover. We then review the first episode of the three series with the most votes. This season, those series are The Case Study of Vanitas, The Detective is Already Dead, and Sonny Boy. Of those three, Sonny Boy is the third and last to air. 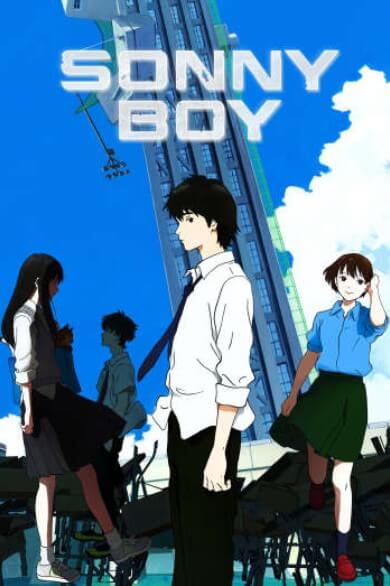 It’s an ordinary summer vacation…except for the fact that Nagara’s high school has mysteriously drifted into another dimension. As the students begin to develop strange new powers, will they work together to survive the alien environment and find a way home, or will their newly formed factions and rivalries turn on each other? – Funimation

Shingo Natsume is best known in the anime industry as a director and animator, particularly on eye-searing shows like One Punch Man and Space Dandy. So it’s no surprise that his new show Sonny Boy is a visual treat. The characters and environment have very little shading on them, giving their world a flat look that makes the students’ bizarre reality-warping superpowers pop even more. It reminds me a bit of the unfairly maligned Flowers of Evil, although I don’t think it’s rotoscoped like FoE was. The animation has a certain fluid but not always smooth look to it that I found really fascinating. Characters’ movements look sort of jerky at times. But their outlines always seemed liquid and barely defined, like they’re holding in an energy that could burst out at any moment. It’s unique and demands every bit of your attention.

Natsume is also credited as Original Creator for the show, and Script Writer for episode 1. As far as I know this is his first ever writing credit, and unfortunately I found it somewhat lacking. Sonny Boy cribs nearly its entire premise from Kazuo Umezz’s classic horror manga “The Drifting Classroom”. Natsume even includes a quick joke about the similarities in the episode. Sure, there are some differences. Umezz’s characters were elementary schoolers, not high schoolers, and his viewpoint character was more of the leader type than Sonny Boy’s loner protagonist. But the school transported through space and time, the kids with powers, and the surreal violence that constantly threatens to erupt (and sometimes does) all make the plot generally feel like a Drifting Classroom remix.

And from a more general craft point of view, the script bounces back and forth between great and kind of stupid. There are some moments of fantastically subtle characterization and hint-dropping, like when Cap is sitting on the toilet, making a bold declaration but picking at his fingers, showing how little confidence he actually has in himself. Or when a scene is shown through what appears to be a fisheye lens effect, but when shown again in the background of the next shot is proven to be the school walls actually bent by superpowers. But then right alongside this we get characters bluntly laying out the premise and themes through cheesy “as you know…” type dialogue. It’s a little frustrating. It’s clear Natsume has it in him to be a great writer, he just doesn’t entirely hit the mark in this first episode.

But this is just the first episode! A premise that’s been done before and some clunky writing is nothing that solid execution can’t save, and we know Natsume has that in him. I’ll probably wait until it’s done and see what the general consensus is, but I won’t be surprised if Sonny Boy turns out to be a winner in the end. Right now though, I feel like I’ve seen it before, and don’t feel like I need to follow it all season.

Sonny Boy is the unique love child between One Punch Man director Shingo Natsume and studio Madhouse. The story concerns a bunch of students whose school is whisked away to an alternate dimension. One faction eventually starts to reign in students by introducing strict laws and penalties. It doesn’t help the fact that the students all gain unique superpowers while in this dimension. Among them are Nozomi and Nagara, who start to change things after meeting.

The first episode does a great job of building tension before delivering an awesome send off. You’ll notice the lack of music in the episode to reflect the dark, empty void everyone has been transported to. The silence is broken once they’re all now floating in a blue sea. Sonny Boy seems to be purposely vague in demonstrating how these powers work in detail for each student, but I assume it’ll reveal more in later episodes.

The anime itself feels like a cross between The Drifting Classroom, My Entire High School Sinking into the Sea, and the works of Daniel Clowes. If you also add in Lord of the Flies, it’s an anime that feels unsettling with something dramatic about to occur. I can’t wait to see what unfolds next and you can definitely put this in your queue this season.

Sonny Boy feels like someone took Neon Genesis Evangelion and Serial Experiments Lain, threw them into a blender with an isekai seasoning pack, added a good helping of retro style, poured it into a glass with a cute umbrella and handed it to me. And guys, it tastes pretty damn good.

Fans of older anime like NGE and SEL will find a lot of nods to the classics in the first episode of Sonny Boy, giving it a retro feel. Both the artwork and the dialogue really helped to make this show feel like a classic I’ve seen before, similar to Kagerou Daze, but better. Honestly, if it weren’t for the brighter colors and some of the voice actors, I wouldn’t have thought for a second this title was brand new.

I loved this nostalgic sense the episode gave me, reminding me of nights I stayed up watching Toonami and Adult Swim as a little kid to catch whatever anime I could. And maybe it’s this feeling that’s got me wanting to watch more rather than the show itself–I can’t tell. What I can say for sure is that Sonny Boy won’t be for everyone. Maybe you need to be a fan of older anime, or maybe you’ve got to like shows that make you feel like you’re tripping on acid in order to appreciate this one. I don’t know for sure. But what I do know is that Sonny Boy has got its hooks in me, and I’m curious to see what happens next.

The first episode of Sonny Boy has to be one of best crafted first episodes I’ve seen for a while. It’s got mystery, it’s got intrigue, it’s got wonderful anime, and then finally at the end, it hooks you into wanting more. In a world where isekai adaptations are dime-a-dozen, and first episodes explain most of the story, Sonny Boy just lets you see the events unfold – after they’ve happened!

To start with, the animation is wonderful. It flows gracefully through the frame letting each key animation complement each other. This seems to be thanks to director Shingo Natsume (One Punch Man season 1, ACCA: 13-Territory Inspection Dept.), who not only directed the episode, but storyboarded it, scripted it, and episode directed it, truly setting the bar for the rest of the series to reach. Natsume is very well known for being an animation director, and his skill in the department really shines in the scenes that were just conversations.

Each shot and framing keeps your attention in a way that I haven’t seen since Bakemonogatari (and none of its subsequent series’). But unlike the 12-year-old series, Sonny Boy uses every frame for a purpose; whether that’s a gag, to grasp how a character is feeling, or to set up an action. No frame is left just hanging about doing its own thing.

Speaking of Bakemonogatari, the dialogue in Sonny Boy’s first episode was so natural. The students spoke like teenagers not giving a shit (or giving too much) but not in a way that was grating on the ears. In fact, I could listen to the dialogue all day – it was just that fun to listen to.

Sonny Boy has a wonderful first episode that is reminiscent of anime from Shinichiro Watanabe or early Mamoru Hosoda, and I hope it stays just as wonderful through its run.

You can watch Sonny Boy on Funimation and Wakanim.

Wondering where to watch Summer 2021 anime? We can help with that!