Welcome back to our First Impressions for Winter 2021! For the uninitiated, here’s how it goes: before the start of each new anime season, our readers vote on what series they’d like us to cover, and we review the first episode of the three series with the most votes. This season our Top 3 were So I’m a Spider, So What?, Otherside Picnic, and Horimiya, and So I’m a Spider, So What? is the second of those to air.

Here’s how Crunchyroll describes this series:

“I, the protagonist, was just an ordinary high school girl, but suddenly I was reincarnated as a spider monster in a fantasy world. Not only that, but I awakened in a dungeon filled with vicious monsters. Armed with only my human knowledge and my overwhelming positivity, I’m forced to use spiderwebs and traps to defeat far stronger monsters just to stay alive… So begins the labyrinth survival story of a girl with incredible mental strength living as one of the lowest-ranked beasts!” 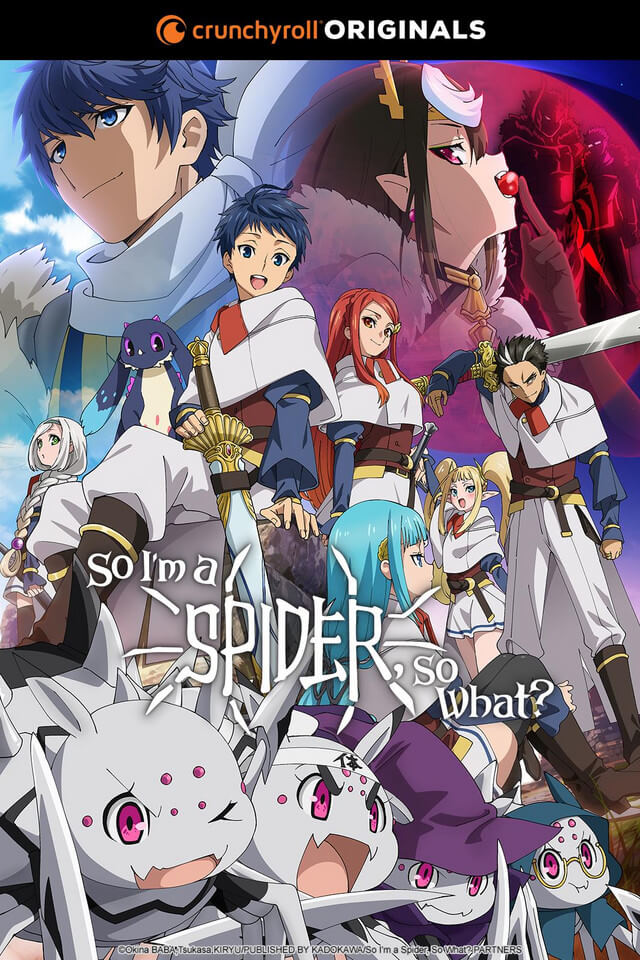 Personally, I’ve been more wary of snakes than spiders. While I wouldn’t casually approach one, Charlotte’s Web has taught me that arachnids do have a little bit of charm to them.

With that said, the first episode of the Crunchyroll Original title So I’m a Spider, So What? Is definitely an experience, to say the least. Much of it hinges on the vocal performance by Aoi Yuki and the way her tone commands the constant lines of monologue she has to deliver in a good chunk of the episode. She really drives home the neurotic, scatterbrained personality of our protagonist who is trying to adapt to her new surroundings.

The vocal performance of the main character is one of the main highlights of the episode, but not much else happens afterward. Aside from introducing where all the other students and teachers ended up in this fantasy world, we’re really just scratching the surface right now. It is interesting seeing the reaction from our spider heroine as she devours different types of creatures to power up. Hopefully, we’ll see more of her leveling up in later episodes.

One last thing of note is the animation in the episode. I personally found it okay, but some might not like the way the CGI models are animated. Studio Millepensee has been involved in some productions with some suspect 3DCG anime before (anyone remember Cop Craft and Berserk 2016), but I’m not too sure about the extent of their involvement. Hopefully, the rough edges will improve over time.

To everyone who voted for this anime:

Thanks. I hate it.

Seriously, the isekai genre has been thoroughly saturated, beaten to death, and wrung dry. There is hardly any originality anymore, and instead we get this gung-ho, let’s-jump-right-into-the-thick-of-it mindset with the characters who immediately figure out what’s happened to them and are okay with it because otherwise we’re stuck watching them come to terms with being reincarnated into a monster for half a season. But this take on it–while funny if done correctly–is so cringy here because even the creators know this is so overdone that they’re desperate to find any way to make their work stand out and keep watchers interested. And for this one, for me, it didn’t work.

So, beyond the generic, “I’ve been reincarnated into an [insert character here] and now must level up because, as we know, all reincarnated worlds involve video game mechanics,” thing it’s got going on, we’ve got to introduce the other stereotypes. There’s the Kirito of the group who looks and acts like your typical I’ll-say-I’m-not-great-at-things-but-I’m-actually-the-best-but-I-need-to-remain-humble character, the prissy girl who wants you to tell her she’s pretty, the guy who’s picture you’ll find beside ‘IDGAF’ and ‘Frat Boy Who Likes to Eat’ in the dictionary, the male character who reincarnated as a girl and quickly became the butt of some jokes and most likely will continue to be the comic relief character because of their situation and is a highly offensive character to the LGBTQ+ community, the sister who has the hots for her brother, and, of course, the elf girl who looks, sounds, and acts 12 but is actually 18-900 years old so it’s totally okay to make her your waifu and not be called a pedo. (Her age was confirmed in the first 60 seconds of her introduction because, of course, it was.)

Getting beyond all of that, the animation isn’t half bad. Most of the episode was done with CGI that was actually pretty good, and while the art itself is fairly standard, it still looks nice. The episode gives you some pretty bad whiplash when it comes to the content, though. While the dialogue is light and funny, the scenes get pretty damn graphic pretty damn quick. And if it wasn’t painfully obvious yet, this show isn’t for me, and I will not be keeping up with it.

And the award for the most disappointing first episode of the season goes to So I’m a Spider, So What? While I’m sure the series will get better, the first episode, which mainly focused on the titular spider and building up the world, felt less like an “isekai satire or parody” and more like a checklist of isekai tropes that need to be explained is a way that falls flat comedically. In a season where some of the best isekai anime are running their second seasons – that don’t need to explain their tropes again –  Spider feels like a step backward in that regard.

This episode felt exactly like That Time I Got Reincarnated as a Slime, just not as funny or engaging.

So I’m a Spider, So What? currently lives or dies on the voice acting of Aoi Yuuki, and she puts up a very compelling reason to watch the show. Yuuki as Spider is plain fun to listen to, mixed with the very loose 3D animation, also makes for a semi-enjoyable watch.

So if you’re into just listening to Aoi Yuuki for 24 minutes, then Spider will be right up your web, though personally, I’d recommend watching any other series she leads. Puella Magi Madoka Magica is a decade old this year, so that would be worth a revisit!

Disclaimer: Daryl Harding is a Japan Correspondent for Crunchyroll News/Feature. Crunchyroll produced So I’m a Spider, So What?

Spider is a little hard to get a bead on. It’s cute and it’s gross. It’s a goofy comedy and a serious fantasy action show, but it’s also hard to tell how much of its comedy is intentional and how much of its action is supposed to be comical because it’s a spider doing it. Its overall premise is exhaustingly common but its execution is super unique. And I can’t figure out if I liked it or not.

Spider is an isekai series about a gamer girl that gets transported to another world and reborn as a lovable monster. Like many isekai series, there are video game-like elements, with skill points and leveling up. I find this stuff quite dull, and Spider is all the more frustrating because I can’t figure out if it’s trying to joke about gamey isekai or not. The reason I can’t figure it out is because every second of this show that the spider is in is done with really janky CG. The way the spider moves, the way the camera moves, all of it looks like an in-engine cutscene from a C-tier Xbox 360 game. Is the last-gen look part of the joke about games?

If it weren’t for the fact that the segments involving human characters all appear to be more typical 2D animation, this thought would never have crossed my mind. But the human parts look just fine. So why choose CG for the spider bits at all, if it’s not a “this is a video game” gag? Maybe a cost-cutting measure, or something to do with the difficulty of animating a spider by hand? Whatever the cause, the result is jarring and not exceptionally funny.

Luckily the spider herself is adorable and endearing. Most of the episode is a lengthy internal monologue, performed with near-Shakespearean wit and intensity by Aoi Yuuki. She pretty much single-handedly saves the episode from being yet another gamer fantasy slog and turns it into something unique. The spider’s design is also great. It’s cute, brightly colored, and begging to be turned into a plush. It occasionally moves in very human-like ways, which I found hilarious. The spider’s action scenes frequently involve her graphically eating fresh kills, getting maimed, and throwing up, and the juxtaposition of her adorableness and this nastiness was really fun.

As a final note, both the OP and ED are bangers. The OP is a poppy, metal-tinged tune that helps set the deceptively dark mood of the show. But the ED is the real star, going through idol and enka music before culminating in a Melt Banana-esque cyber grind freakout, all performed by a dancing spider.

I think overall my impressions of the show were positive, and I’ll likely keep watching if only because there’s really nothing else like it, for better or worse. But I think the jarring look of the show is going to be a dealbreaker for a lot of viewers.

You can watch So I’m a Spider, So What? on Crunchyroll and VRV