Welcome to the back half of our Winter 2022 First Impressions! In case you’re new, or in case you’ve forgotten, this is how we typically run these things: in the week or two before the start of each new anime season, we do a poll for our readers to vote on what series they’d like us to cover. We then review the first episode of the three series with the most votes (and sometimes more than three, in the case of a tie or other extenuating circumstances). So far this season we’ve covered In The Land of Leadale and World’s End Harem. Next up is My Dress-Up Darling, with Sasaki and Miyano still to come. 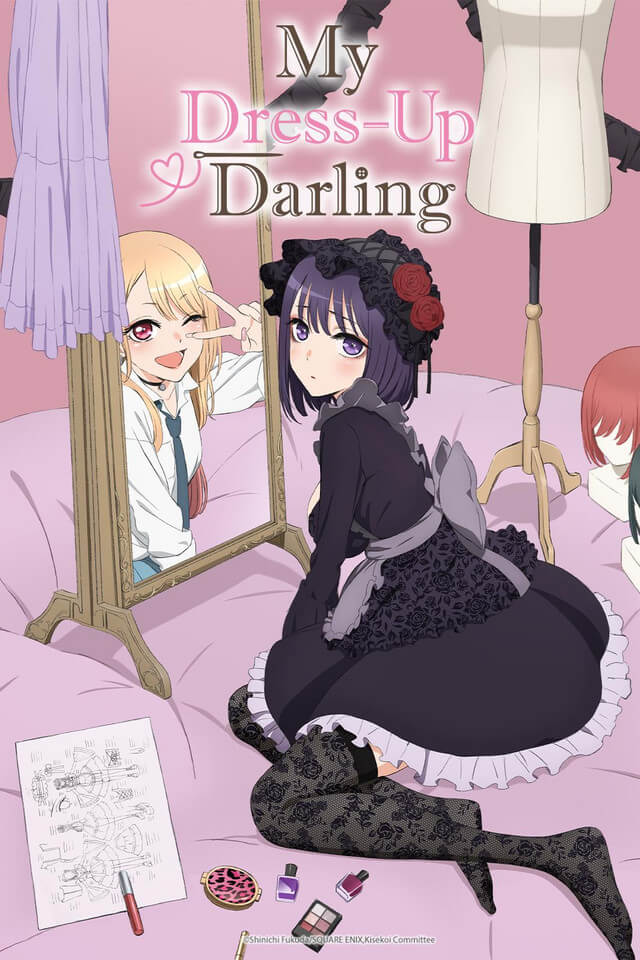 Wakana Gojo is a high school boy who wants to become a kashirashi–a master craftsman who makes traditional Japanese Hina dolls. Though he’s gung-ho about the craft, he knows nothing about the latest trends, and has a hard time fitting in with his class. The popular kids–especially one girl, Marin Kitagawa–seem like they live in a completely different world. That all changes one day, when she shares an unexpected secret with him, and their completely different worlds collide. – Crunchyroll

I’m not the biggest fan of romance-focused anime. It takes a lot of work to get me invested in the main couple’s relationship dynamic. On the surface, there is nothing interesting about the dynamic of My Dress-up Darling. The main character, Wakana, has a hobby he thinks others will find weird, so he has no friends. The show heavily tries to make a point about how much of a loner he is, with him constantly calling attention to it. The main girl, Marin, is popular and pretty. The whole male nerd and female popular girl dynamic simply aren’t all that interesting, but the anime manages to make it work.

Both feel embarrassed about their hidden hobbies, but by teaming them up to make cosplay clothes, with Wakana sewing and Marin wearing them, they are able to bond over their hobbies without shame. It’s a wholesome setup for this dynamic. What really helps make this work is the expressiveness of the animation. While it can be a bit awkward, it’s enough to make this show endearing, instead of stale.

This anime does have a bit of fanservice, but it’s not too distracting so far. Hopefully, this doesn’t become an annoyance later on. It’s hard to say whether this anime will be able to keep the main characters’ dynamic interesting for the entirety of its run. It could get boring later on, but for now, it has the potential to be an entertaining romance. I feel this anime might be worth watching this season, especially for romance junkies.

I am a huge fan of the source manga, and desperately wanted this anime to be good. And it was! It’s beautifully animated in a casual sort of way. There are no flashy action setpieces, of course, but the attention to detail in every little interaction gave just as much depth to the characters as the writing and voice acting did.

As pretty as the show is, the characterization is the main draw here. Gojo and Marin are life-threateningly cute together. I like that they are brought together initially by mutual admiration for each other’s skills more than physical attraction (although Gojo at least is for sure physically attracted to Marin, more on that later). It will pave the way for a more believable relationship in the long run. I also like that the show seems ready to get into the weeds with sewing techniques and cosplay terminology. The source manga gets pretty in-depth about what actually goes into cosplay, so it’s safe to say that anyone interested in that topic will find something to enjoy here.

This is basically as good a premiere as anyone could hope for, but if there is a sticking point for some people I’m sure it will be the fanservice. There’s not a ton, but the fact that it’s there at all in an otherwise sweet and pure show about realistically depicted teenagers will bother some viewers.

Personally, it doesn’t really bother me. The fanservice isn’t necessary, exactly, but it’s used in a way that feels integral to the characters and subject matter. The camera doesn’t leer up and down Marin’s body for the viewer’s benefit. Instead, it shows us what Gojo sees and sets us up to see how he reacts, and how Marin reacts to being seen. It adds a bit to our understanding of them and goes hand in hand with the inherent intimacy of a show about making and wearing bespoke clothes. Not saying it entirely avoids being skeevy, but the fanservice feels like it belongs in the show. Its presence doesn’t take me out or ruin the vibe.

Anyway, I love Marin and Gojo and I loved this show. If you’re going to watch any of the anime we’re covering this season, it should be this one.

There’s nothing more manly than a guy making a dress for his girl. My Dress-Up Darling’s first episode was cute overall, setting up a potential anime couple of the season right from the get-go. Wakana Gojo is a shy high schooler who is tasked by popular girl, Marin Kitagawa, to help make a cosplay of her favorite character. New bonds will be formed and sparks will surely fly at some point, but I have a strong feeling Gojo and Marin will enjoy each other’s company throughout the series.

I really enjoyed the premiere overall and look forward to seeing more. In terms of an ideal first impression, it has all the groundwork it needs to establish how Gojo gradually opens up and learns to embrace his hobby with the help of Marin. We do see bits of how assertive and forthcoming she is in this episode, so I hope she gets a chance to help Gojo see past his insecurities.

I never would’ve expected an anime about a dollmaker who helps make a cosplay would hook me from the start, but I guess every anime seasons has its surprises.

Ya did it, fam. You voted for a good one.

I’ve been reading My Dress-Up Darling for over a year now, and when I heard that it was getting an anime adaptation, I was pretty excited. There’s always the worry that something doesn’t translate right from manga to anime, or the animation is subpar, or the voice acting isn’t the best, but this one was spot on.

Gojo is as sweet and soft-spoken as in the manga, and Marin as pretty, energetic, and heart-on-her-sleeve as I’ve come to expect from her character. The voice actors did a great job bringing these two cuties to life, and the art and animation are just perfect for an adorable rom-com like this one. The team did a great job of keeping true to the manga’s original design, too. While the OP sequence wasn’t anything special, the rest of the show has my attention.

If you’re looking for a laid-back story filled with character development, cute girls cosplaying, and all the hijinks that come along with that, then definitely give My Dress-Up Darling a chance.

The plot of My Dress-Up Darling is simple, the boy is anti-social, the girl is extroverted, they find a common interest, and love blooms between them due to said interest. But the execution of the said plot is what makes My Dress-Up Darling wonderful.

With the outrageously gorgeous animation, cinematography, and mise-en-scène to the charming lead characters of Gojo and Kitagawa, My Dress-Up Darling speaks to me in such a wonderful way. I loved the use of the framing when Gojo was listening into the initial conversation between Kitagawa and her friends with the friends shadowed out, but still at the front of the soundtrack, giving us the feeling of being Gojo in that scenario. And then the use of blur on the edges of the frame to give the 2D image depth. It’s clear that a lot of time and care has gone into the animation of the first episode to make it look (and feel) as good as it does.

Then from a character standpoint, Gojo and Kitagawa represent two sides of nerdy fandoms. Gojo is those people who may have been teased unnecessarily in the past for what they like, while Kitagawa is the person who may have gone through those same experiences but pushed them aside to both embraces that side of her and still fit in. We all know both of those types of people. My Dress-Up Darling does a great job of showing the anxiety of both sides of that spectrum, and hopefully, successfully bridging that gap into something beautiful.

From the first 10 seconds, I was on board with My Dress-Up Darling and will be more than happy to continue watching it every week. It’s by far the best new series this anime season I have watched so far.

As an aside, I loved how realistic the locations were in the first episode. While we didn’t get to see much, the opening animation has Gojo and Kitagawa inside an Animate store that I instantly picked up as the Ikebukuro store, with more of the outside plaza perfectly recreated in the final shots of the opening. As someone who regularly frequents that Animate store, I loved seeing it portrayed in such high detail. Again, it shows how much care Keisuke Shinohara and his team at Cloverworks put into the series–let’s hope they keep it up!

You can watch My Dress-Up Darling on Crunchyroll.

Wondering where to watch Winter 2022 anime? We can help with that!