Welcome to a new year, and a new season of anime! In case you’re new, or in case you’ve forgotten, this is how we typically run these things: in the week or two before the start of each new anime season, we do a poll for our readers to vote on what series they’d like us to cover. We then review the first episode of the three series with the most votes (and sometimes more than three, in the case of a tie). This season we’re covering In The Land of Leadale, My Dress-Up Darling,  and Sasaki and Miyano. We’ll also be doing World’s End Harem, which was one of the winners last season, but was subsequently delayed until this season. In The Land of Leadale was the first of these to air. 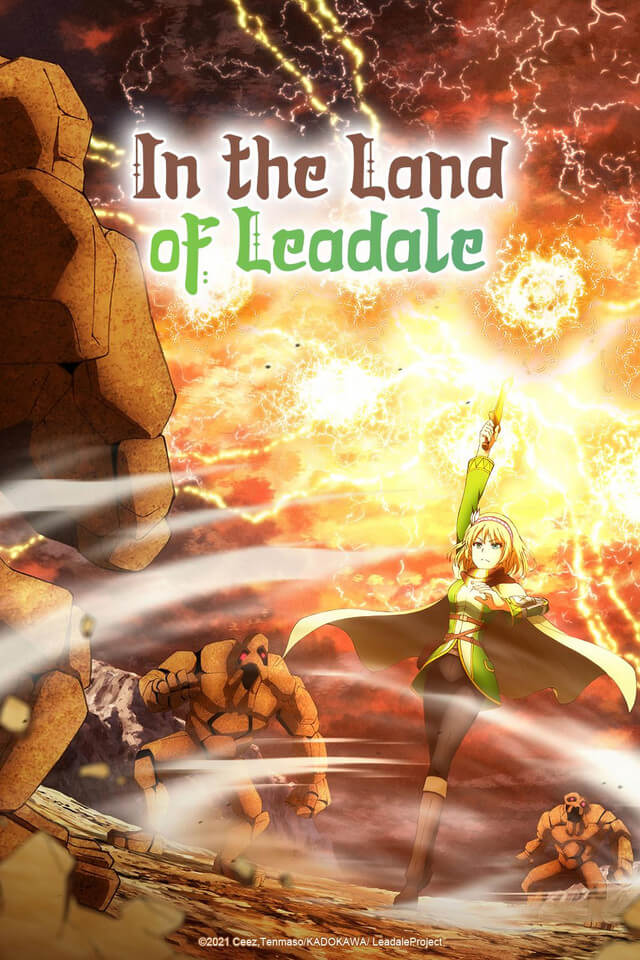 Due to a terrible accident, Keina Kagami is forced to live on life support in order to survive. The only way for her to be free is within the VRMMORPG “Leadale.” One day, her life support stops functioning, and Keina loses her life. But when she wakes up, she finds herself in the world of Leadale 200 years in the future. She is now the half-elf Cayna, who possesses lost skills and OP statuses and becomes closer to the other inhabitants of this world. But among those inhabitants happen to be the “children” she made in character creation?! – Crunchyroll

Every time a new isekai comes around, I have the instinct to skip. That’s not to say I can’t enjoy any isekai, as there are some I like, but it’s hard to get excited for these new shows that largely seem the same. This is how I felt coming into Leadale, but I do have to be fair and come in with an open mind. Despite that, I still felt this premiere was simply average.

The protagonist wakes up in a VR game she used to play after her life support shut off in the real world. This first episode does a bit of world-building for the game, some explanation of its mechanics, and gives Cayna the opportunity to bond with the inhabitants to learn about what the game world is like 200 in-game years after she last played.

Nothing in this episode was offensively bad in any way, but it still felt boring and uninteresting. Nothing about its characters or world had much of a hook and I came away feeling unimpressed. The only saving grace of this first episode was the facial expressions of Cayna, which were sometimes distorted and funny looking, but that wasn’t enough to save what appears to be an average looking production overall.

There are certainly worse isekai anime out there, so if you are a fan and are looking for a new one, this may be worth watching. But for a more general audience, I wouldn’t prioritize this. I may give this anime a few more episodes, but if it fails to keep my attention, I will drop it.

Regular First Impressions readers will know I am unlikely to enjoy any given isekai/reincarnation/trapped-in-the-game show. Something about the themes they usually work with just doesn’t do it for me. That said, Leadale is the closest I’ve come in quite a while, because it dodges a lot of the pitfalls that tend to drive me away from the genre. For one, the protagonist isn’t The Chosen One of Legend, powerful only because it’s a power fantasy and the story needs her to be. She is powerful, but it’s implied that it’s because in her former life she was an absolute menace in PvP, and over time her exploits became the stuff of actual legends to the NPCs.

The “implied” in that last paragraph is also a key point for me. Infodumps and “as you know” exposition are a plague in fantasy anime. But Leadale trusts its viewers to figure out what kind of near-future world Cayna came from, and what kind of fantasy world she’s in now, from just the opening few seconds and a couple throwaway lines. I also appreciate that the main character is a woman. In the past few years fantasy anime has had more than enough gross dude protagonists, little girl love interests, and sexualized slavery that’s justified by the setting. Leadale has none of that, at least so far. Cayna interacts with the other people in the setting in a perfectly normal way, and other than the dudes that try to steal from her, no one is particularly creepy back. It’s refreshing.

Unfortunately all this conflict-free mundanity means not much happens. Cayna spends the majority of the episode simply getting her bearings, talking to people and walking around. I don’t expect the show to be a total action-fest, but without any action at all it’s kind of boring. Ultimately though I think the problem is I just have no fondness for MMORPGs. I’ve never really been able to get into them, so I bounce right off settings like this. Leadale does a lot of things right, but I’m just not really primed to enjoy what it’s doing. Hopefully I’ve given you enough info to decide whether it’s for you, but I’m probably gonna skip it.

I always appreciate a slow life anime fantasy series and In The Land Of Leadale is a pleasant addition to this sub-genre. The first episode doesn’t really focus on the past life of our lead heroine, Cayna, as much as other shows, taking a more straightforward approach to the storytelling.

I think I can describe this series as fun, cute, and rather unremarkable, which isn’t really a bad thing. The downside for viewers (especially if you’re tired of all the isekai, fantasy, or virtual game anime) is that this first episode isn’t really special or dazzling in its debut. Additionally, Cayna herself isn’t a unique character, playing to the overpowered otherworlder trope who has skills for days in her imaginary popup menu. Now it may sound like I’m bashing Leadale, but I actually liked it just enough to keep watching it this season.

The great thing about In The Land Of Leadale is that it’s just entertaining and relaxing enough to keep yourself invested. Although it’s unlikely to break any mold or change any hater’s mind about these fantasy anime stories in general, I still think there’s something here that will make it a sweet show.

Leadale was fine. Boring, but fine.

I know I’ve said it before, but I’m saying it again: the isekai genre is overdone. If a studio wants to make an isekai I’m interested in, they’re going to have to turn the genre on its head because there are just way too many, and every scenario has been done three or more times by now.

This one seems to try and take a few twists–the MC is a girl with some sort of tragic backstory, the game has an offspring aspect, there’s been a large time skip from when the MC was originally in the world and now–but none of them are attention grabbing. The MC is as basic as you can get (cute girl, already super powerful, too kind and sweet and accepting of her situation for my liking, and has other typical trope-y traits), the episode did absolutely nothing to make me feel for her real life situation, and the world-building fell flatter than her heart monitor in the opening scene. Even the opening and ending sequences were just… Fine. But if you like predictable shows with cutesy elves that have OP powers and a love for tasty food, then I’m sure this show will continue to be exactly as it was in this episode. Fine.

In the Land of Leadale, more like “I’ve Reincarnated as the Most OP Character in a Land Where the Economy Went Down the Crapper,” is one of the newest isekai of the season and … groan. There’s nothing wrong with In the Land of Leadale, the main character of Cayna is sweet, the animation is fine (not amazing, just fine), and the world-building is decent, but nothing special.

It’s really hard to get invested in a generic isekai series in 2022. Without a premise that blows me away, what’s the point? There’s at least 100 isekai anime out, so there’s bound to always be a better-than-average one. That means the first episode really has to hit in some regard to keep me watching.

Sadly, In the Land of Leadale doesn’t. In every respect,  it is just okay. I don’t have anything terrible to say about it. There’s nothing offensive in it. If anything, the first episode could be comfy if not for the nagging feeling that the main character is in some sort of death purgatory. It really needed that two-episode first episode treatment to flesh it out more, but even then, one has to wonder what else it would bring.

But alas, unless the show really hits off in a further episode, I’m not continuing it in the slightest.

Cayna was so cute too!

You can watch In The Land of Leadale on Crunchyroll.