Welcome back to Winter 2022 First Impressions! In case you’re new, or in case you’ve forgotten, this is how we typically run these things: in the week or two before the start of each new anime season, we do a poll for our readers to vote on what series they’d like us to cover. We then review the first episode of the three series with the most votes (and sometimes more than three, in the case of a tie). This season the winners were In The Land of Leadale, My Dress-Up Darling,  and Sasaki and Miyano. However, one of last season’s poll winners, World’s End Harem, got delayed until this season, so we’re covering that too, and that was the second of our slated shows to air. 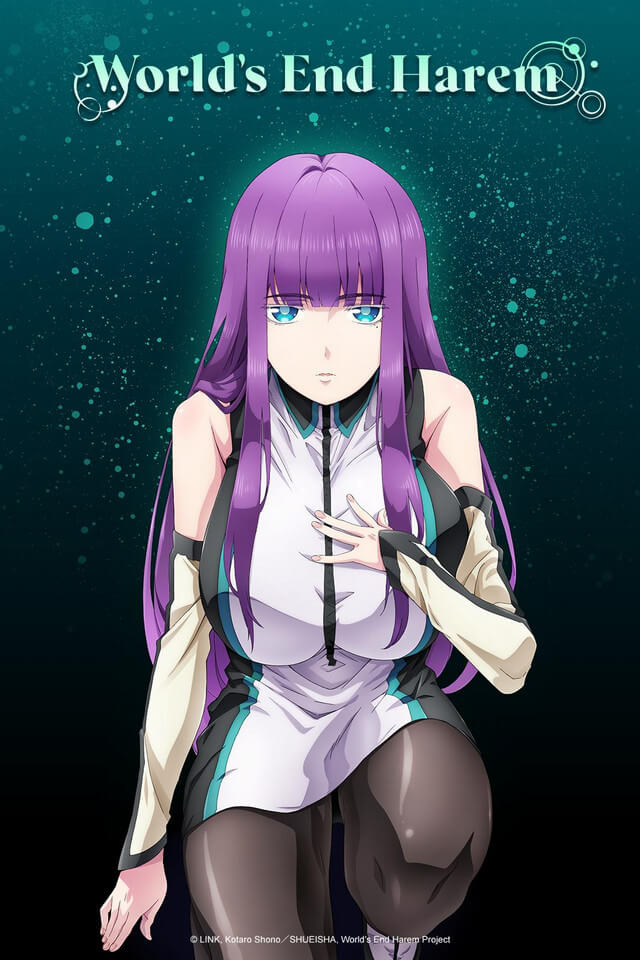 In the year 2040, Reito Mizuhara is a young man who is put into cryostasis while awaiting for a life-saving treatment to be developed in order to cure the rare disease he suffers. Five years later in the year 2045, Reito awakens to discover that, in this period of time, an extremely lethal and contagious virus called the MK (Man Killer) has emerged, which mysteriously affects only males, causing the death of about 99.9% of the world’s male population except for approximately one million survivors who were put into cryostasis before being infected. Much to his surprise, Reito also learns that he is one of five men in Japan who somehow developed immunity to the MK Virus and, as a result, is required to participate in a breeding program by impregnating as many women as possible so that their children can replenish the world’s population. While Reito investigates the secrets surrounding the MK Virus and the mysterious disappearance of his girlfriend Elisa Tachibana, the series also shows the perspective of the other men who have developed immunity to the MK Virus, each with their own circumstances. – Wikipedia, since Crunchyroll does not offer a summary of their own on the show’s streaming page.

World’s End Harem is superficially interesting for two reasons: first, in a world where most ecchi anime are romantic comedies, it tried to be a serious sci-fi drama. It didn’t quite get there, but the fact it tried at all is worth mentioning. Second, I like its method of censoring out the *gasp* nipples. Most shows go for light beams or convenient fog. World’s End Harem went with a sort of pixely, glitched-out overlay that suits its sci-fi trappings and is at least unique.

And that’s it! Those are the only good things. Otherwise, WEH is a hilariously stupid, tragically unsexy porn show. Blurred-out boobs are something ecchi fans simply learn to deal with. We wait for the BluRays and try to find some enjoyment in the mystery of what’s behind the fog. But World’s End Harem barely even gives you the chance to do that. There were only a few brief moments that had to be blurred out since the show is much more focused on trying to convince you its BS pandemic setting makes any kind of sense. This is a mistake, of course. I do not give a rat’s ass *why* all but five men are dead, I only care *that* all but five men are dead and thus all the world’s women are stampeding in my direction…uhhh I mean the main character’s direction. This show is pure fantasy fuel and yet it wastes time trying to explain how we ended up in this situation instead of saying “just go with it” and getting down to business.

And finally, there’s a strong undercurrent of “saving yourself for marriage to your one true love is the only right way to live and most women are sinister sluts trying to use you for their own gain”. The show paints almost every woman Reito meets as selfish and evil just for trying to prevent a whole species from going extinct. Reito alludes to feeling like livestock, and going hard on that angle would have been much more interesting. They could have used a sort of societal role reversal to make a point about misogyny by having Reito be treated as a commodity, in much the way that men treat women in real life. But they decided to just do regular old misogyny instead. Ecchi anime that treats its female cast with any sort of respect is rare but this one feels particularly gross to me.

But seriously folks, let’s talk about harem anime for a sec. For pretty much most of my early anime watching days, this genre was my bread and butter. I found shows that had an unlucky MC with a harem full of pretty girls pining for his love to be the most hilarious stuff I saw at that point. World’s End Harem takes this premise and pits one of the last surviving men in the world against five billion women.

After watching the first episode, I can safely say the anime is a mix of sci-fi and unintentional comedy with a huge heaping of trash on top. I kind of miss the white rays of lights they used for censorship because they replaced them with fuzzy black bars in this show. Then again, seeing this anime uncensored is simply not worth it because the story is pretty uninteresting. It doesn’t know what to do with its unique premise other than having our MC struggle to save his chastity.

That goes into my next point, in which World’s End Harem greatly exposes the fault of the Innocent Virgin trope used in a lot of harem anime. In fact, the MC, in his own anime, is essentially endangering humanity to find his one true love who is currently MIA. C’mon buddy, but at some point, you’re going to need to owe your harem of girls a definitive answer: choose someone or commit to all of them. It looks like our main lead is choosing the former, which means humanity is doomed.

If you can read the title, you know exactly where this show is going.

To be honest, WEH wasn’t great even for the genre it’s in. The art looks bad, the pacing is bad, the plotting is bad, the characters are bad. And thanks to all the juicy bits being censored, the only saving grace the show has is its voice actors. It’s thanks to a couple of them that it seemed like any of the characters had, I don’t know, an actual soul? I was starting to convince myself the twist at the end would be that everyone was actually an AI, they felt so stiff.

So do I recommend this one? No. If you’re looking for fanservice, there are much better options out there. For example, High School of the Dead. (It’s one of my favorites. Yeah, judge me.) World’s End Harem wasn’t even good enough as a dumpster fire to get me to watch it for funsies. It was just.. Bad. And in a boring sort of way. So unless you’re desperate for a boy with huge eyes, steamy scenes that are covered in black boxes, and a MC that likes to cock-block himself for ‘plot reasons’, I suggest you keep looking.

If World’s End Harem was a trash heap fire, it’d make it a better series, but at this point, the trashiness level is lacking just enough to make it mediocre at best, boring at worst. The only saving grace for World’s End Harem would be the fanservice a series like this thrives on, but the censorship from the television stream on the currently streamed version just eradicates any hope of enjoyment out of a series that prides itself on the enjoyment of the male characters.

Besides the main dude, cause, ya know. A guy being thrown into a world of 5 billion women wanting him just isn’t something he’s into. Which is okay, just where does the show go from here? “Oh no, I don’t want to have sex with literally whoever I want” for 12 episodes? Without the fan-service part? Nah.

Personally, I’d pick it up if an uncensored version is every released, but until then the first episode of World’s End Harem is the end of the road for me.

You can watch World’s End Harem on Crunchyroll.