Welcome to our Spring 2020 Anime First Impression series! For the uninitiated, here’s how it goes: before the start of each new anime season, our readers vote on what series they’d like us to review the first episode of, and we cover the series that get the most votes. Normally we keep it to the top 3, but due to a tie, this time around we’re doing four: Kakushigoto, LISTENERS, My Next Life as a Villainess: All Routes Lead to Doom! and Millionaire Detective – Balance: UNLIMITED. LISTENERS was the second of those to air and it’s the one we’ll be talking about here.

“In a world without music, young Echo was there the day legendary “Player” Jimi Stonefree and his mecha disappeared while fighting the mysterious Earless. Ten years later, he meets an amnesiac young girl named μ (Mu) who has an input jack on her back. Could she be a “Player” like Jimi? Together they set off on a journey to unravel her past and save humanity.” 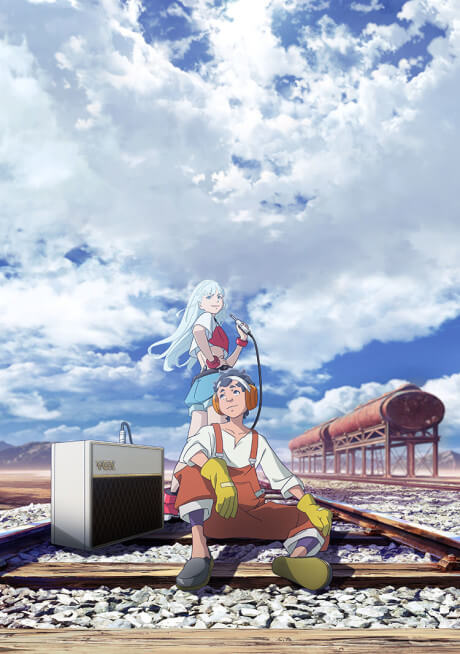 I am exactly the target audience for LISTENERS. It is artisanal crack made just for me. I want to preface the following gushing by saying I don’t think it’s a *great* show. Each individual thing it’s doing has been done better elsewhere. But the specific way it combines rock music and mecha very much appeal to me. The mecha in question pack down into amplifiers that are based on real licensed amp models (the main characters’ is a Vox AC30) and loud butt rock plays every time they expand into their mecha forms. The mecha are activated by inserting a vacuum tube (the giant diode thing that main girl μ wears around her neck, which is a tube that amps need to function) and controlled by plugging yourself into them via a specially implanted ¼” jack on your back. It’s totally ridiculous and it rules.

There are other music references to keep an eye out for too – The main character is named after the Binson Echorec, a delay effect famously used by Pink Floyd. Characters in the credits resemble real-life rock stars like Prince and Sid Vicious. There’s a giant forte symbol just outside town for some reason.

If you’re not a giant rock nerd like me, there’s enough action and slightly bawdy humor to keep you entertained. The show has a great color palette, mostly grey and brown, but with vibrant colors erupting in when the mecha or μ are onscreen. Funimation produced a snappy, funny dub for this one. I have a childish sense of humor and laughed inappropriately loudly at the “this looks just like the holes I’ve seen in books” line, and they sneak in even more allusions to music and lyrics in the dialogue.

If I had to take issue with anything, it would be the scene where Echo runs through town lugging his boxed up mech. I’ve lugged a tube amp in and out of many a dive bar and orchestra pit over the course of my life, and I’m sorry but sprinting while carrying one, even a relatively small one like an AC30 2×12 combo, is even less possible than musical mecha, giant apparitions, or finding a cute girl buried alive in a scrapyard (this is, of course, a joke (except it’s not)).

Anyway, please watch LISTENERS. Is it some transcendental masterpiece? No. Is it super fun? Hell yeah. Like any good band, it’s much more than the sum of its parts, and I hope it continues to be the wild, inexplicably proper noun-filled ride it promises to be so far.

The first episode of LISTENERS gets off to a mild, but intriguing, start. Much like Battle Angel: Alita, our main character Echo discovers the mysterious heroine lying in a large trash yard. From what I can say about the episode so far, LISTENERS is a mecha action show draped in a dirty, hard rock and dystopian aesthetic.

Although I’m interested so far in where the anime is heading, I’m not quite roped into its story quite yet. As an introduction to the characters and series as a whole, it’s a very typical affair. The protagonist discovers a person in a place. That person is amnesiac and does something that forces the protagonist to move to a different setting. Oh, and as they start their new journey, cue the three bad guys looking off at them from a distance.

All this setup should be familiar to a lot of anime fans and I can see why some may not be impressed so far. That said, the crazy combination of mechas and rock music are a match made in heaven. There’s potential for Listeners to really step it up next episode and get creative with its fights. Let’s hope so.

You can watch LISTENERS on Funimation,  AnimeLab, and Wakanim.