It’s finally time for the final Fall 2021 Anime First Impressions! In case you’re new, or in case you’ve forgotten, this is how we do things around here: in the week or two before the start of each new anime season, we run a poll for our readers to vote on what series they’d like us to cover. We then review the first episode of the three series with the most votes (and sometimes more than three, in the case of a tie). This season we’re covering The World’s Finest Assassin Gets Reincarnated in Another World as an Aristocrat, Komi Can’t Communicate, and Visual Prison. Komi Can’t Communicate is the last of of the three to air, having been delayed by Netflix’s weird scheduling. 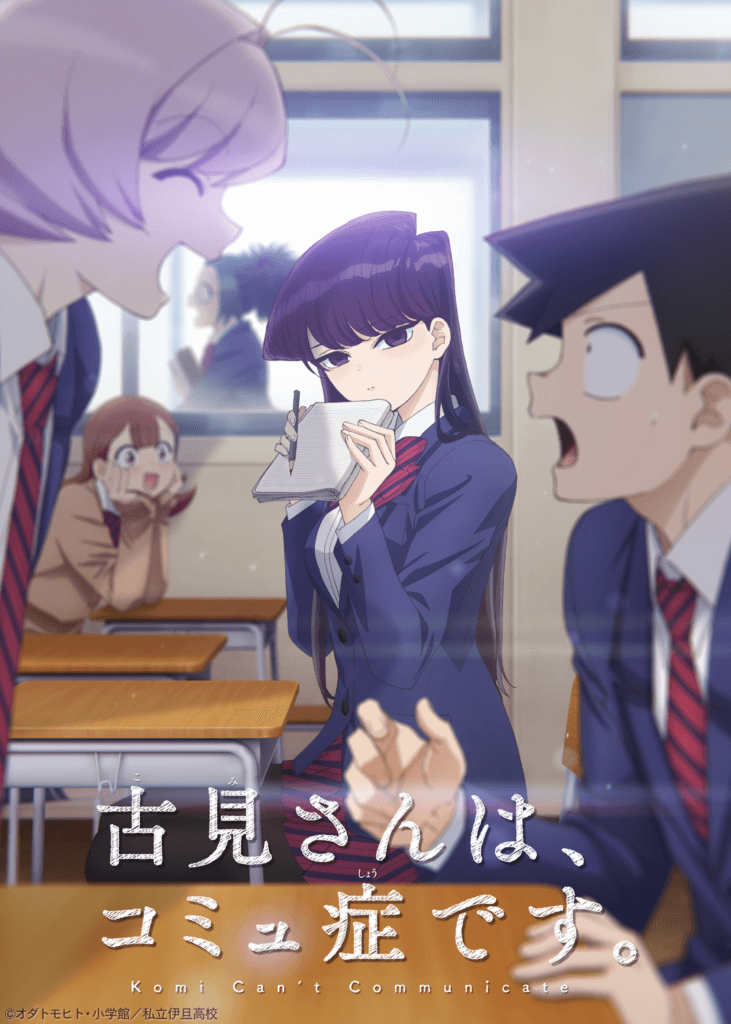 At a high school full of unique characters, Tadano helps his shy and unsociable classmate Komi reach her goal of making friends with 100 people. – Netflix

I think a lot of people expected Komi Can’t Communicate to be the Big Show of the Season, and as far as I’m concerned it delivers on all fronts. I expected the show to look nice, given how high-profile it is, but it’s almost over-animated in the way a big-budget action show might be, except it’s a wholesome school comedy. The particular style of rapid-fire comedy, based as it is in meme-y reaction faces, really benefits though. And there were lots of other visual touches that I Iiked, like the frequent on-screen sound effects – though that makes it a bit of a subtitling nightmare for Netflix.

And that’s one significant gripe I had. It’s not really a problem with the show itself, more the English-language viewing experience. The sound effects not being subtitled doesn’t bother me, but other onscreen text not having subtitles does. There’s a gag that implies the main character Tadano was extremely cringe in middle school, but the onscreen text isn’t subtitled, so English viewers miss out on the details of his cringe-ness. It’s valuable background character info that we just don’t get.

One other potential sticking point for viewers is the nature of the comedy in the series and how it’s handled. Komi has a non-specific communication disorder. She badly wants to make friends but freezes up when she tries to talk, and whether or not you perceive the show as making fun of her will determine whether or not you find it funny.

Personally, I thought they made it work.. The joke isn’t so much “haha she’s so awkward”, it’s more the difference between how her classmates see her and how she actually is. The whole school loves her because she’s pretty and comes off as mysterious. They already want to be friends with her but have trouble approaching her. For her part, Komi badly wants to make friends but is terminally shy and can’t quite pull it off. It’s a pretty standard miscommunication-based comedy, if you think about it. It’s just walking a tightrope over a vast gulch of insulting, cruel humor. But it walks it well – Komi Can’t Communicate is very cute and very funny, and never once felt mean to me. Check it out.

After weeks of stewing in Netflix Jail, Komi Can’t Communicate dropped its first episode for a weekly streaming release. There has been some controversy on the subtitle and translation quality for this first episode, but in my honest opinion, I don’t think it really affects the viewing experience that much. The reason is because the charm of the episode is watching Komi and Tadano’s non-verbal interactions together and reading the lines between them. I also get easily overwhelmed when seeing a lot of text on screen, so I only focus on the subtitles as the episode progresses.

The main conflict of the story is Tadano befriending the socially awkward Komi and helping her make friends in the school. What I hope to see in future episodes is the way these two evolve and how they interact with the many personalities in class. I haven’t read the manga, but I’ve heard more of Komi’s character will be expanded gradually throughout the series.

Overall, I think the anime is off to a great start and I couldn’t be more glad to enjoy it weekly on Netflix rather than having to wait a few months afterwards.

If I were to compare Komi to another piece of anime content, the first work that comes to mind is A Silent Voice. Not so much for the whole “not speaking” angle, but the way the camera hangs on a certain frame, and the post-processing at play that blurs the outline of the frame while also having a deep depth-of-field. It’s little things like the chalk being used in place of tear and dust that make me feel like I’m watching something with the detail of a Kyoto Animation production.

But it isn’t, Komi Can’t Communicate is animated at OLM (with the first episode being outsourced a bit to Trigger), who are well known for their work on Pokémon – though, Pokémon is produced by a different team. Team Kojima is working on Komi, who usually leads the Major 2nd franchise, with Kazuki Kawagoe directing as his debut directorial work. And what a debut!

The title states that Komi can’t communicate, but in so far the first episode, she has more expressive emotions than most anime characters on this side of the digital divide. The little bits of character animation that Komi goes through are blink and you’ll miss them, but when you do catch them, they’re wonderful.

Having read a lot of the original manga by Tomohito Oda, I was surprised how well the Komi Can’t Communicate anime translated the writing elements that make up a lot of the early chapters, and were able to keep me engaged the entire time. Frankly, my only issue with the first episode is that it isn’t longer.

You can watch Komi Can’t Communicate on Netflix.