Back at it again with the Fall 2021 Anime First Impressions! In case you’re new, or in case you’ve forgotten, this is how we do things around here: in the week or two before the start of each new anime season, we run a poll for our readers to vote on what series they’d like us to cover. We then review the first episode of the three series with the most votes (and sometimes more than three, in the case of a tie). This season we’re covering The World’s Finest Assassin Gets Reincarnated in Another World as an Aristocrat, Komi Can’t Communicate, and Visual Prison. Visual Prison is the second of the three to air. 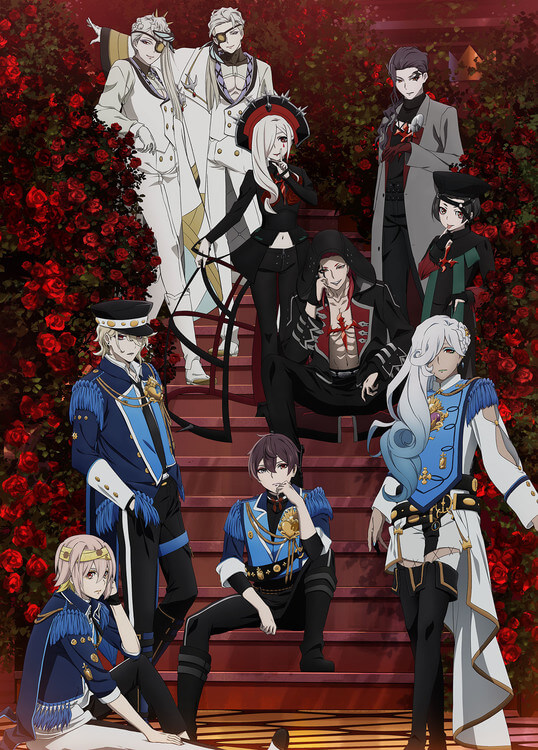 Beautiful immortals have gathered in Harajuku to compete for a grand prize: Immense power! For years now the artists behind worldly culture and music have secretly been vampires, including those who produce Visual Kei. Now, they perform their most beautiful songs in the hallowed grounds of the Prison under the Scarlet Moon. – Funimation

With the way they introduced the characters, you’d think this anime would be an advertisement for some gacha game, but it’s apparently an original anime. If you were at all interested in this anime, I’m sad to announce that I’ve seen gacha game trailers that could tell a more engaging story than this first episode did.

Most of this first episode was dedicated to visual kei performances. I didn’t know what that was before watching, but it’s a style of music from what I looked up. Very little was dedicated to properly introducing us to a narrative, as if they wanted to make sure this sold some music right off the bat.

We know very little about any character, and the show doesn’t seem very concerned with even trying to make us care, outside of maybe using the characters’ attractiveness as a selling point. The most we get is from our protagonist who starts off too shy to sing, and ends the episode singing, just because.

This episode was even disappointing from an animation perspective, using lifeless cgi for the performances, and stiff 2D animation everywhere else.

By the end of this episode, all I really got from this was vampires performing music (which I didn’t think was good) and looking pretty. While the show is obviously catering to a particular niche, I don’t think I can even recommend it to anyone, let alone the target audience.

Okay, fine, a 9 is perhaps a bit more than Visual Prison deserves, but I genuinely enjoyed the weird and dumb ride this first episode took me on. There was some stuff about it that I thought was legitimately good. The power metal-infused j-rock throughout the show was pretty great. This is a show about bands, after all, so bad music would mean total failure. I also liked the music video-ish sequences that accompany the songs and the way the (hilarious and terrible) lyrics were integrated into the settings. They were fun to watch despite the clunky CG.

The big issue is that Visual Prison is an incoherent trainwreck from the first second. There are vampires. The main character is a half vampire who dreams of being a singer. There’s a Battle of the Bands seemingly judged by a moon only vampires can see. Also, the bands feed on their fans by trapping them in elaborate illusions (the music videos) to suck their blood while they think they’re at a concert. I think. I honestly have no idea. The show explains absolutely nothing and each scene seems unrelated to the last one so you can barely even infer what is happening.

And yet. AND YET. I was enraptured. Visual Prison is exactly the kind of stupid that works on me. I laughed like a fool the whole way through. Whether at it or along with it I’m not entirely sure, but I had a great time. It is silly and incomprehensible and I am looking forward to episode 2.

Every season, you get one of those “guy-centric” anime with pretty boys and a story focused on one gimmick. Most are boring and forgettable while some are distinct and memorable (e.g. Hypnosis Mic). I think Visual Prison is leaning towards the latter, but the first episode has some flaws that make for a somewhat confusing first impression.

Frankly, I wasn’t really sure what the hell was happening. I think the story is about secret vampires who fight each other through song and collect people’s energies instead of their blood? And also a scarlet moon turns select males into signing vampires? But our protagonist is a half-vampire, half human hybrid who must make a decision before the second episode. There’s also a black and white vampire singing group with one representing angels while the other is going for a gothic, emo look.

Look, I’ve done my best to describe what I’ve seen from episode one and I probably lost some of you by now. Visual Prison is steeped in pretty boy (bishonen) energy that’ll make girls scream as well as the visual kei rock genre that is famous for its all-out performances and fashion. I’m certainly no expert in either area, but I think the show does a great job of meshing everything well so far.

Episode one also contains a fair bit of musical performance with the story being fleshed out in the second half. The performances do take a fair bit of the first half, but they were levelled out enough that it didn’t distract from the plot. I’ll see how this anime goes as I’m genuinely curious how this anime is going to turn out. I really hope it goes off-the-walls crazy and doesn’t lose its unique visual kei charm.

Also, I have mixed emotions about seeing a vampire’s orgasm face when he gets bit in the neck by one of his bandmates. Is just that me?

Ok, so. Uh, where to start? Visual Prison was definitely a… thing. For a girl obsessed with dating boys, you’d think I’d be all up, down, and wrapped around these fine ikemen specimens with their sexy sounding seiyu, offering my neck up like Bella Swan and blasting these songs on repeat until my husband couldn’t take it any more and filed for divorce. But I’m not, which kind of says a lot to me.

The art was nice but basic. The voice acting was hit or miss. The music was good and pretty much what I would expect to hear as an anime intro for something like Vampire Knight. The CGI was bad. The story is confusing and predictable and also bad. I’m still not totally sure, but it was something about hot vampires doing a yearly Battle of the Bands to see who can get the most screaming fangirls to offer to their moon god to get some sort of omnipotent power? And the main character doesn’t know he’s half vampire but Moon Daddy has given him the right to compete in this talent show? And they all have swords that are also microphones and they have to touch the tips as an offering to Moon Daddy in a magical girl-esque sequence?

I… I just don’t know. On the surface, it’s right up my alley. But then I think about some of those lines like, “I’m going to kill you with my song,” and, “Dissipation can’t bring this beautiful libido down.” Oh, can’t forget, “I reach out my hand, what lies beyond? Bro.” But the best part by far is, after watching dozens of screaming fangirls turn into screaming balls of light, then witnessing two bands battle it out after pulling out these microphone-swords from various parts of their bodies, somehow transporting them all into two different music videos, and being bombarded with the magical power wind from rockin’ it too hard, Ange looks up at four people literally floating in the sky like Goku just chillin, shields his eyes from the wind and says, “I’ve never heard a song like this before. It’s so destructive that it breaks and cuts through everything.” Yeah, buddy. I don’t think anyone has and why are you not freaking out at least a little? And then he loses it after one vampire bites another vampire to give them an orgasm in front of these fanorbs that are still continuing to scream in delight and ecstasy.

I think this show was meant to be fanservice for women much like High School of the Dead is for men–no real plot, just heavy sexual overtones with hot men who are also all lead singers. And as much as I love hot men, heavy sexual overtones, and hot men who can also sing, Visual Prison just didn’t do anything for me. I hate to say it, but this one is getting a hard pass.

From the pretty vampire boys who suck each other’s blood to the music that screams “look at my visual kei style” rather than actually producing decent music, I’m sure there is someone out there that that watch the first episode of Visual Prison and loved it. I was not one of those people.

I can forgive the poor music quality – it’s not meant to be great, it’s meant to sell CDs that flame fan wars over which vampiric band is better –, but the story and the animation are woeful. We’re now in a world that has four Love Live! Generations (yes, really!), each one telling roughly the same story of the main character coming to music in some way, and each one do it better than the story of Visual Prison. Love Live! has also seemingly perfected the art of the “music video in an anime episode” trope, Visual Prison is just like “Yo, whatever, here’s like four songs in the first episode.” It’d be okay if the songs were good, but they aren’t.

The animation on top feels like a visual prison. The 2D animation was decent, nothing good, nothing bad, just your average run-of-the-mill work, but the 3D … I can count the number of anime that have stiffer models than this on one hand, and that list includes the Berserk anime and EX-ARM. Maybe they wouldn’t be so stiff if they actually hung out with the adoring hypnotized fans rather than turn them into souls? I think? Visual Prison rushes through that part.

One of the best parts of the episode was the opening animation, which looks heavily inspired by the ending themes to K-ON! (No, thank you!) and Love, Chunibyo & Other Delusions (vanishment this world). The storyboarding, the music, and the animation were better than the entire episode. It’s interesting seeing this mysterious Takeshi Ando reappear to storyboard and direct after only previously working on the opening for the second season of Kaguya-sama: Love is War.

But I digress, the opening is up on YouTube to watch. Watch it there and enjoy. Don’t bother with Visual Prison, there are way better pretty boy singing anime out there.

You can watch Visual Prison on Funimation.