Kujira Anan is a rom-com/dram mangaka with three previous titles under her belt: Oba Men (2011), Maruko to Suugaku Ouji (2015), and Boku wa Uchuujin ni Koi o Shita (2016). Na no ni, Chigira-kun ga Amasugiru (or And yet, You Are So Sweet) is her newest series and the first to be translated to English.

After Maaya Kisaragi is resoundingly rejected by her crush and mocked on social media for her confession, she’s crushed. Lamenting her situation to herself one day, she’s horrified to find that popular boy Chigira overheard everything. Ready to become the butt of even more jokes, Kisaragi prepares herself. But Chigira offers comfort and an idea to end her heartbreak—fall in love with him instead! 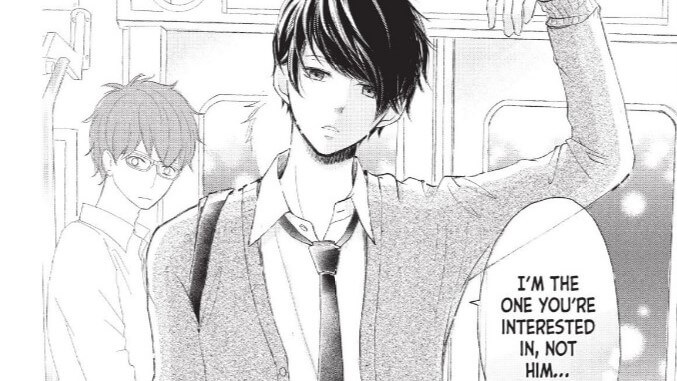 Hands down, the best thing about this manga is Chigira. He’s a total cutie kuudere with emo hair and I am So. Here. For. It. Fans of Blue Spring Ride (Ao Haru Ride) will immediately fall for this softer version of Kou. But you can’t have him. He’s mine.

The first volume does a good job of fleshing out Maaya and giving a good glimpse into Chigira’s motivations and personality. And while Maaya and Chigira are complete opposites, the meshing of these two characters is both comedic and adorable.

So I have to say, Maaya is a kind of weird character. Her strange obsession is… a little cringe. I think the manga-ka was trying to get away from the typical girl-meets-boy-and-falls-in-love deal, and it’s definitely an interesting twist to this rom-com, but I don’t think the execution worked. As the volume progressed, it got better, but I definitely had some, ‘you’ve got to be kidding me,’ moments towards the middle. I think as the series progresses and gets away from this particular issue, it’ll be much better.

If you like romcoms, it’s definitely worth checking out. Fans of Blue Spring Ride, Maid-Sama, and Fall In Love Like a Comic will immediately fall head-over-heels for this adorable best boy, and I’m excited to see what volume two holds.

You can order And Yet, You Are So Sweet Volume 1 digitally on Barnes & Noble.

Story and Art by Kujira Anan