Welcome back to our Fall 2020 Anime First Impression series! For the uninitiated, here’s how it goes: before the start of each new anime season, our readers vote on what series they’d like us to review the first episode of, and we cover the three series that get the most votes. This season our Top 3 were Moriarty the Patriot, Taiso Samurai, and The Day I Became a God. The Day I Became a God was the second of the three to air in English.

“Yota Narukami had a life to live—or at least he did until he meets young Hina, who declares the world will end in 30 days. Scorning her prophecy, he refutes her prediction but questions himself after seeing her abilities in action. Moving in, they find a common bond most unexpected. Is it true, is it really the end? More importantly, why did she pick him to spend their final moments together?” 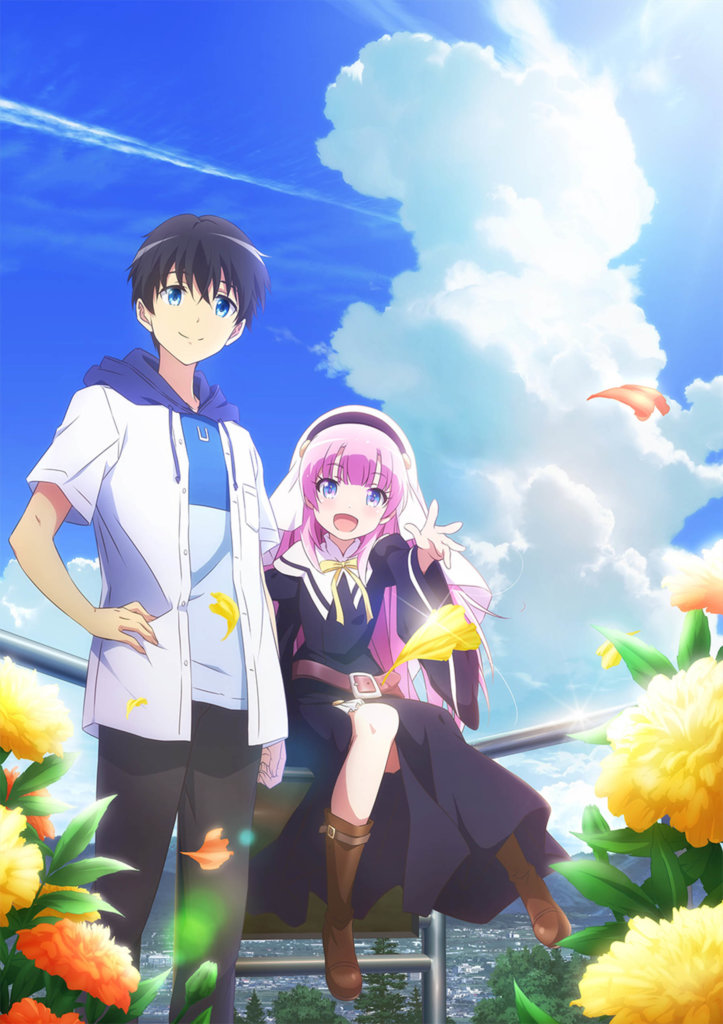 This show is going to wreck me isn’t it? The Day I Became a God sees the reunion of Key’s Jun Maeda and Na-Ga with the stylish team at P.A Works. If you’ve heard of Angel Beats and Charlotte, you should know that this anime is their third collaboration together. As a diehard advocate for all things Key Visual Arts, I’m very excited to see where this anime takes me and how it’ll break my heart.

Like many Maeda focused stories, we start with the happy sunshine comedy, the introduction of a normal teenage boy and a loud, obnoxious girl who refers to themselves in the plural third tense. This so-called “god” calls themselves Odin and has foreseen the world ending in 30 days. Naturally, we see them annoying the main character, who has taken too many losses in one episode alone already.

As a debut episode, it wasn’t that spectacular, considering we focused a lot on the slice-of-life comedy and banter that can be hit-or-miss for some. Yet in some moments, the anime shows that there is more to this god than meets the eye. I anticipate more things unfolding as the show progresses.

I don’t know how this series will make me cry, but I’m looking forward to seeing how tragic this gets. Do your worst Maeda.

This is the kind of show that I can tell from episode 1 is gonna wreck me.

It doesn’t help that it’s by the creator of Angel Beats and Charlotte, both of which are fantastic and cry-fest worthy themselves. Fans of these two shows will immediately see the similarities in The Day I Became a God. But for those that haven’t seen Angel Beats or Charlotte, the funny characters, beautiful art, and the hints at the overarching plot should be enough to keep almost anyone watching. Just keep in mind, if this is anything like its predecessors, you’re gonna want to keep a box of tissues handy for your tears. Or a bucket. That might be more cost-efficient.

The Day I Became a God is an incredibly frustrating show. It is beautifully animated and immaculately directed. The color palette and some of the camera angles gave me Makoto Shinkai vibes (if you’re gonna crib from someone, Shinkai is a good choice). The issue is that this visual splendor is in service of plot, characters, and dialogue that are all dumb beyond your wildest dreams. So there’s this little girl, ok? And she’s dressed like a nun, right? And she claims to be a god and demands to be revered as such. And whenever she does this, she does it by screaming. And this is all supposed to be very endearing and funny. It’s not though.

Equally not-funny and not-endearing is our miserably bland protagonist, who does almost nothing but chaperone the tiny nun around as she tries to demonstrate her omniscience. The one little bit of characterization we get is that he’s desperately in love with a girl who, get this, is somehow even more boring than he is. Normally the girls in romcom shows like this are likable, so some credit must be given to Jun Maeda for the bold move of making them dull at best and unpleasant at worst.

Maybe I am unfairly tearing into this one, but Jun Maeda’s previous works have never done much for me and The Day I Became a God exemplifies all the things about his storytelling style that I don’t like. I’m normally a huge mark for gremlin girl shows like this. I like Uzaki-chan Wants to Hang Out and I’m looking forward to the Don’t Toy With Me, Miss Nagatoro anime. But that type of story and character walk a very fine line between cute and annoying, and The Day I Became a God is so far on the annoying side to me that if I didn’t have to write this I would have turned it off after less than five minutes.

Here’s a fun little fact about me that might get my anime card revoked, I’ve never watched all of Angel Beats. I’ve tried, multiple times, to do so, but the series has never caught my attention. I do love the music and the animation style though. In saying that, I slogged my way through Charlotte while it was airing, and came out with a pretty average taste in my mouth.

So the Jun Maeda x Aniplex x P.A. Works (who I love separately mind you!) collaboration works was at zero out of two for me. In comes The Day I Became a God, which on paper, sounds like the most “Maeda collab” work he could try and come up with, and from the first episode, it felt exactly like that.

Now, if you liked Angel Beats and Charlotte, you’ll probably LOVE The Day I Became a God, and that’s fine. In fact, the first episode was actually not too bad – a bit slow, especially for a team known to go at their own pace until the final episodes when “Oh crap, the plot is a thing we need to do” happens – but not bad.

The main girl, Hina ‘Odin’ Sato, does feel a little bit too much like Index from the Raildex franchise (and in my opinion is one of the reasons why Index is the worst of the franchise), which makes her VERY irritating. In fact, now thinking about it, the entire first episode could be a better animated, and slightly funnier, version of the first Index episode. If you look at the story beats and forget about the overall plot – oh, the world is ending in 30 days … apparently, then yeah…

Honestly, that comparison is more interesting than the episode, which can tell you enough about what I thought of it.

You can watch The Day I Became a God on Funimation, AnimeLab, and Wakanim