Welcome to the Fall 2020 Anime First Impression series! For the uninitiated, here’s how it goes: before the start of each new anime season, our readers vote on what series they’d like us to review the first episode of, and we cover the three series that get the most votes. This season our Top 3 were Moriarty the Patriot, Taiso Samurai, and The Day I Became a God. Moriarty the Patriot was the first of the three to become available in English.

“In the late 19th century, the British Empire nobility reigns while its working-class suffers at their hands. Sympathetic to their plight, William James Moriarty wants to topple it all. Frustrated by the systemic inequity, Moriarty strategizes to fix the entire nation. Not even consulting detective Sherlock Holmes can stand in his way. It’s time for crime to revolutionize the world!” 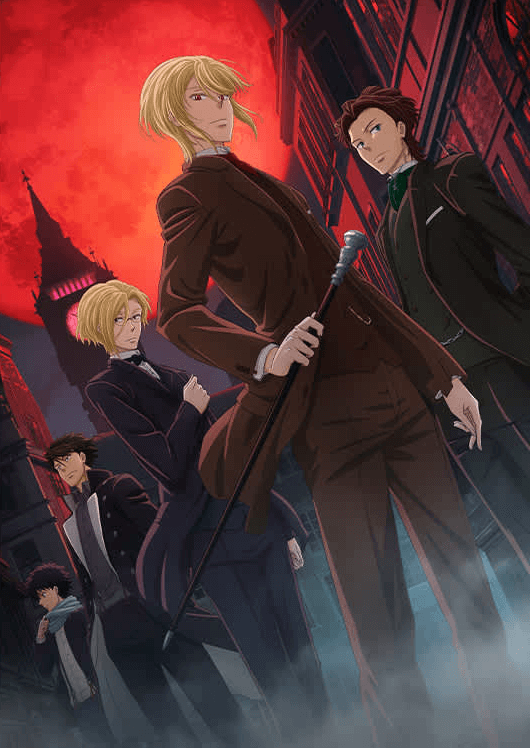 I’m always a sucker for Sherlock Holmes-inspired media and stories. There are many angles of retelling the tale of the great detective and his memorable cases. Following in the footsteps of Kabukicho Sherlock, we have Moriarty the Patriot.

The anime is a well set up and executed premiere about Sherlock Holmes’s greatest rival: James Moriarty! Whereas he’s often portrayed as a villainous mastermind in underground crime, here he is an anti-hero with a penchant to help people as a crime consultant. Like Holmes, he presents high levels of intellect, investigation, and deduction to resolve cases. The difference is their approach to such cases and whether or not certain means are more necessary to take than others.

The first episode does a really great job of not only introducing the key characters, but also building the world in which Moriarty works. No needless exposition. No jumping of the shark involved. As a debut episode, Moriarty the Patriot has gotten off to a great start. Now we just need to see how Moriarty and Holmes will cross paths.

I’m a big fan of Sherlock movies, books, shows, etc. From the leather-bound collection of Sir Arthur Conan Doyle’s works that sits on my mantle to my blu rays featuring Robert Downey Jr. and Benedict Cumberbatch–I eat it up. So when I heard they were making an anime based on the famous series, I was interested, albeit nervous. I wasn’t sure how a character like Sherlock would translate with anime tropes and stereotypes that we’ve all come to expect. And while I still don’t have my answer, Moriarty the Patriot is off to a good start.

I’ll be honest, the first episode starts out kinda… meh. The story is dark, but the main characters feel weird. Like they’ve been plucked from another story and dropped in this one. So for the first ten to fifteen minutes, I was a little bored. But when the last five minutes started to really pick up, and the weird things started to feel like they fit into the show, oh my god. The ending was so good, I’m happily going to watch episode 2 when it launches. Though I’m a little worried the show will revert back to how episode one started, if they keep up the excitement and feel of the last five minutes for the rest of the series, it’ll be absolutely fantastic!

I’ve never really been a fan of “this time, the villain is actually the hero” type stories, but Moriarty the Patriot was pretty interesting on paper. It’s not just a story that follows the villain or humanizes him – it’s a total rewrite of the character. Ignoring the fact that he’s a young hottie here and not a gaunt old nerd, this version of Moriarty isn’t even really a criminal mastermind. He’s a rich boy swinging his status around like a hammer, using money and power to accomplish his (admittedly pretty noble) goals with no regard for life or law. He’s closer to Batman than he is to the classic Moriarty character.

Unfortunately, the show had killed any interest I had in it by the end. Moment to moment it’s a very nice looking show, with attractive character designs and smooth animation. But there were a lot of baffling and unintentionally hilarious directorial choices, like the constant closeups on people’s eyes, or the lingering shots of red-tinted gargoyles to show us that something eeeeeeevil is about to happen. It seemed to me to be relying too heavily on cheap shock factor, which made it feel nowhere near a classic Holmes story.

The characters too were, by varying degrees: flat, dull, or inscrutable, and bore no resemblance to anything from the Sherlock Holmes canon. Which makes me wonder – why even bother dressing it up in classic literary trappings if it’s completely its own show? In the end it just kind of distracted me from what could have been an interesting Victorian Punisher sort of story. It seems like the creators wanted to still somehow do right by the classic Holmes canon even as they did very much their own thing, and it just doesn’t work at all. This one is a stinker and I think you can safely not even bother with it.

You can watch Moriarty the Patriot on Funimation, AnimeLab, and Wakanim