Nao’s childhood wasn’t perfect, but she loved it. Her single mother was a traditional Japanese sweets maker, and from a very young age, Nao wanted to follow in her footsteps. The two lived in an employee room at a famous wagashi shop where her mother worked, and that meant Nao spent a lot of time with the young heir, Tsubaki, who quickly became her best friend. As picture-perfect as her situation was, it couldn’t last. The master of the wagashi shop was found murdered one morning, leaving Tsubaki as the only witness to his father’s final moments. And when asked who could have done such a thing, the young boy pinned Nao’s mother as the culprit.

After her mother was sent to jail, Nao worked hard to eventually become an apprentice wagashi maker, but before her career could really kick off, her past came knocking and she was kicked to the streets. Just as she reaches her wits end, Tsubaki shows back up in her life. This time around, though, he doesn’t recognize her as the girl he once grew up with. She’s given the chance to return to the renowned Kogetsuan, the place where it all started, to hone her skills and find out what actually happened that fateful day that sent her mother to prison. So Nao steels her heart and takes Tsubaki up on his offer of marriage. While she may have thought the hardest part of this arrangement would be keeping her identity a secret, she’s about to find out there are so many more things that can go wrong with her plan, and falling in love is one of them. 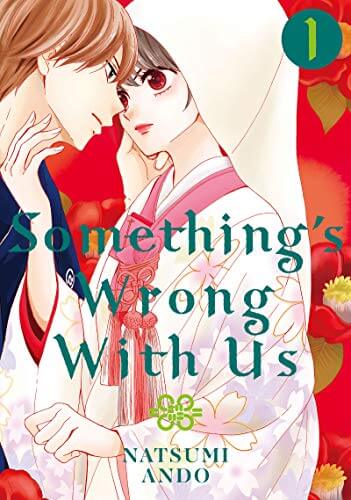 Mystery, murder, secrets and lies–Something’s Wrong with Us has all the makings of a good romantic drama right off the bat.

I love traditional and historic Japanese designs, and the beautiful wedding kimono on the cover of volume 1 immediately caught my attention. After glancing through the first chapter, the story seemed interesting, too: a young woman who hides her identity and tricks the person who unjustly sent her mother to jail for murder into marrying her to find out what really happened? This had Revenge written all over it, and I was ready for a hot mess of a plot.

The story is highly detailed, with multiple plots and characters working in tandem and against each other. Just when Nao thinks she knows what’s going on, something else will be sent her way to throw her off course. Seeing how she handles each derailment of her plan all while struggling to keep her identity a secret and earn a place at Kogetsuan is, in a way, inspiring. It shows how strong of a character Nao is, both in mental fortitude and spirit. 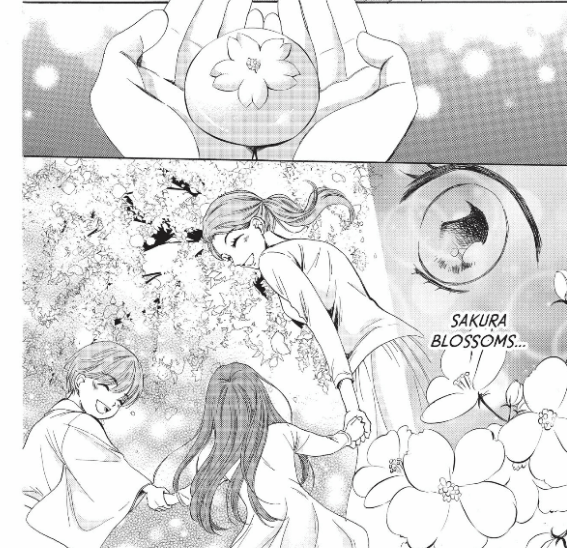 Something’s Wrong with Us is more than a story of revenge, though. The volume goes into great detail on how traditional Japanese sweets are made, etiquette, formal settings, and more. Similar to how My Dress-Up Darling could be a beginners guide to cosplay, Something’s Wrong with Us could be an introduction to wagashi. Having these informational segments throughout the series, such as the different types of wagashi, how red bean paste can be made differently for certain effects, what specific designs signify, how much meaning can be behind a single sweet, and more gives the volume an interesting setup. It’s not just a murder-mystery, it’s not just a rom/dram, it’s not just an informational series on wagashi; rather, it’s something between all three.

Despite having interesting characters and a great premise, Something’s Wrong with Us feels a little all over the place. Nao goes back and forth between seemingly having a plan and going with the flow; the story frequently gets derailed or drawn out, usually because of the in-depth descriptions of wagashi and their meaning; and the overarching mystery feels more like a show-and-tell situation rather than a story where readers can piece together the answer themselves. Add in the older-looking illustrations that aren’t my personal cup of tea and you’ve got a volume 1 that, while it isn’t bad, isn’t great either.

Despite my complaints, Something’s Wrong with Us volume 1 shows enough premise to warrant further reading. I really like the idea of a rom/dram focused around a murder with a traditional Japanese skin, and I enjoyed learning about wagashi and seeing all the illustrations of so many different sweets. However, I’m not yet convinced the two do well together. For anyone who finds these plots interesting, I’d say go ahead and check out the series, but for anyone on the fence, I don’t feel strongly enough to try and sway you one way or another.

You can purchase Volume 1 of Something’s Wrong With Us on Right Stuf.