If you’re reading this and have never heard the term, you may be asking: what is kumihimo? Kumihimo is a traditional textile art of Japan that dates back at least to the Sengoku period (1467-1615 CE.), if not even further. It is a braided cord technique that can create either flat, square, or round cords, and can be made with as few as four or more than sixteen strands. The cords were originally made with either monochromatic or multi-colored silk fibers and used to lace the lacquered pieces of a samurai’s armor together. With all that lacquered iron, you can imagine the lengths of cord that one set of armor would need.

As time progressed from the Sengoku period into the Edo period (1603 -1867 CE.), a time of relative peace, there was much less demand for armor and its accompanying accessories. It was then when kumihimo production saw a change in purpose. The cords came to be fashion accessories for women, as a means to fasten their obi more securely, or as accents on small bags and other small items. Due to the new, fashionable uses of kumihimo, color and variety of patterns only increased from this time to the present.

As with many textile arts in Japan, kumihimo saw a steep decline in production after World War II. Despite this, small pockets of artisans remained active. Today it is enjoying a revival due to a concerted effort of the government to preserve many of Japan’s traditional folk arts. Kumihimo is also getting international interest through its exposure to popular media like anime. This is how I personally was introduced to this braided cord technique.

Kumihimo in Your Name

Your Name is a heartwarming anime film that uses time travel and body switching to connect two high school students, Mitsuha and Taki, who live in very different worlds. Through a series of body-switching events these two teenagers get to learn about each other and the lives of those around them. We see our first glimpse of kumihimo while Mitsuha gets ready for school and ties a length of cord into her hair. 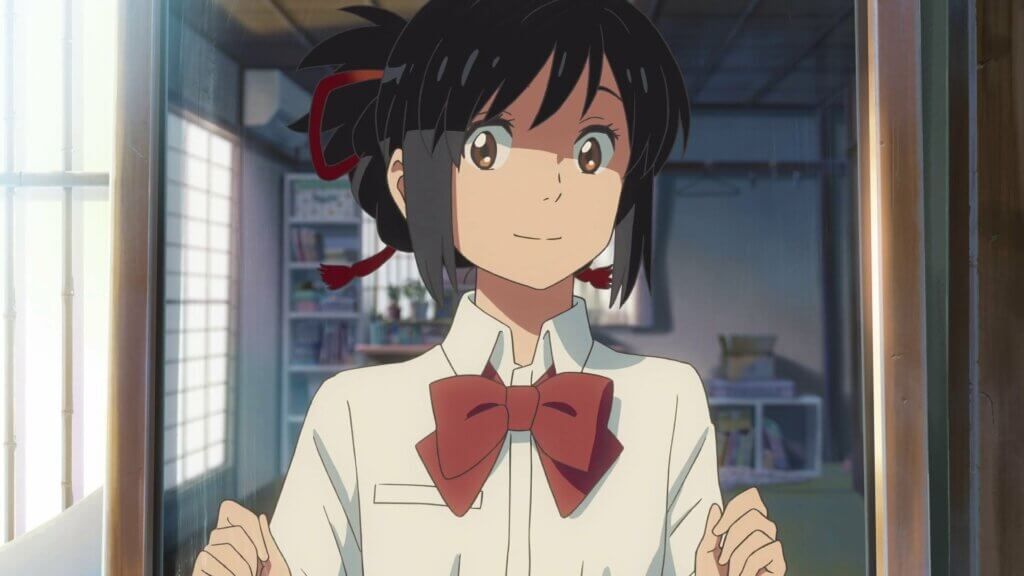 As we get to see more of Mitsuha’s life, both from her perspective and from Taki’s, we see her, her grandmother, and her younger sister creating kumihimo cords together. Mitsuha’s grandmother explains that time, love, friendship, and life are like the strands in a kumihimo: they intertwine, get tangled, break, then rejoin further down the cord. While working on cords together two types of frames are shown, the classic round frame marudai, and the square frame takadai. 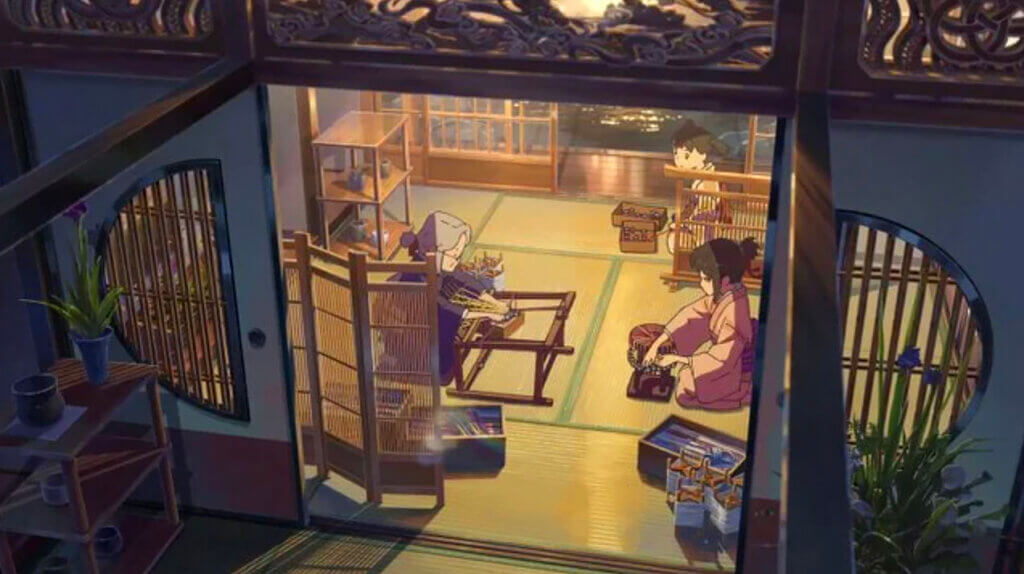 As their grandmother talks, we get to hear the gentle clatter of the wooden bobbins, or kumihimo tama, as they bump together while the strands of the cords are braided. This leads to the thoughtfulness and meditative feel of the scene. 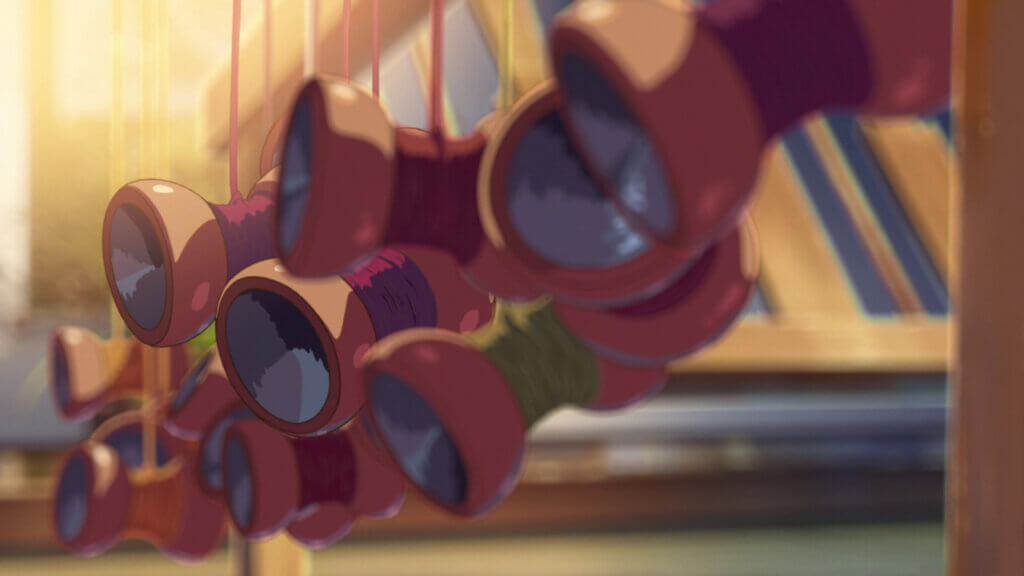 Mitsuha, being part of a household that takes care of a major Shinto shrine, is also seen carrying a finished cord to a ceremony where it is used to tie a paper covering over an offering to the local deity. 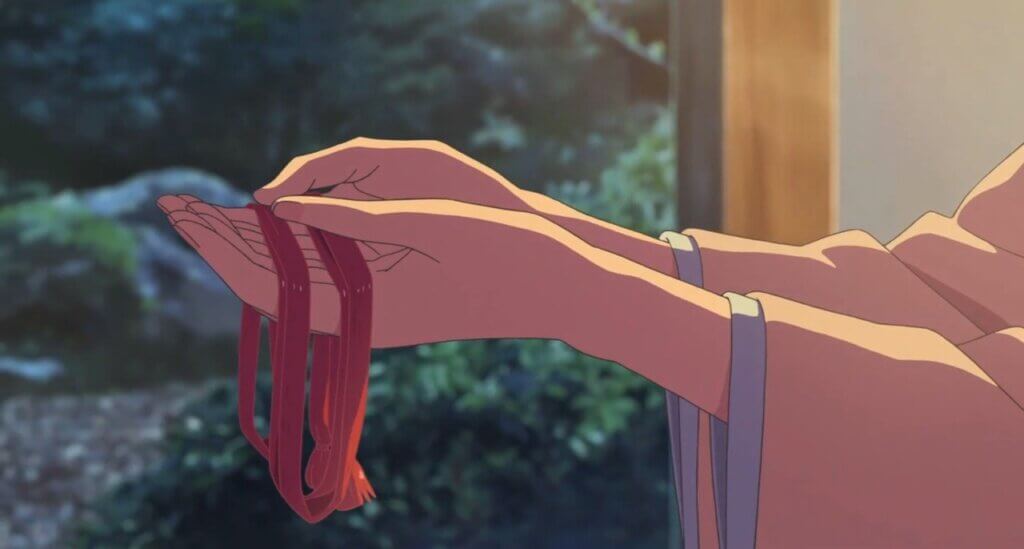 Later, we hear Taki express his frustrations at trying to learn to make kumihimo while in Mitsuha’s body. Throughout Your Name, Mitsuha is seen wearing her trademark red cord except when Taki is inhabiting her body. It appears again as a wristband on Taki after Mitsuha gives it to him.

Even though kumihimo may appear as a trivial cultural reference, it plays an integral part in the plot of Your Name. The use of red in Mitsuha’s hair cord, and how it travels back and forth between her and Taki is very reminiscent of the classic Japanese symbolism of the red string of fate. It is believed that a spiritual red string is attached to individuals who are fated to be together. 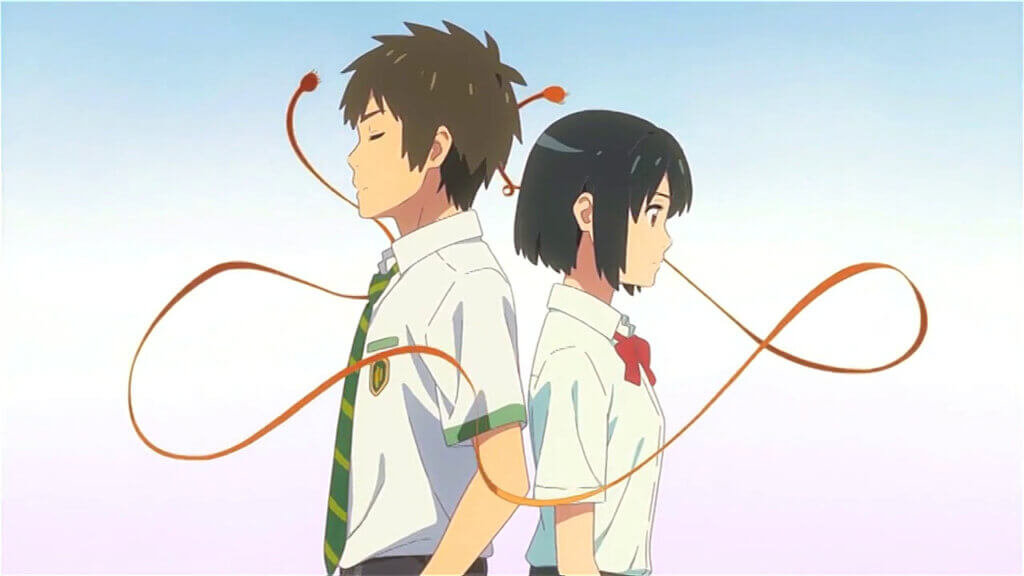 The cord used in Your Name has an even deeper meaning, however. Its physical nature serves as a way for Taki and Mitsuha to find each other when the memories of their shared experiences start to fade. Taki even remembers the story that Mitsuha’s grandmother told him about time being like the strands of a kumihimo, even when all other memories of his time with her are forgotten. The emotional bond between these two teenagers are embedded and made tangible by this one mostly red kumihimo cord. Without the use of the said braid in Your Name, the physical connection between Taki and Mitsuha would have been lost. Much like the forgotten connection between Mitsuha’s grandmother and her dream partner as she aged.

After seeing Your Name in its only showing in Edmonton theatres in 2018, I thought about the cords that the characters were making. Back then, I did not know the proper name for the technique or craft. This was soon rectified once I found a few books on Japanese textiles from my local needleworkers’ guild, among which were two wonderful books on how kumihimo is made. There was a big roadblock to my education, however. The cords need to be braided on a stand or frame of some sort to maintain the correct tension of the strands.

One of the books I had in hand did outline a cheap method to create a frame. This involved turning a lampshade upside down with a flat sheet of cardboard placed on top. The cord then went in through a hole cut in the middle of the cardboard and the strands came off the outer edge. The bobbins were to be either empty film canisters or pill bottles. Here is an image of my clumsy construction. 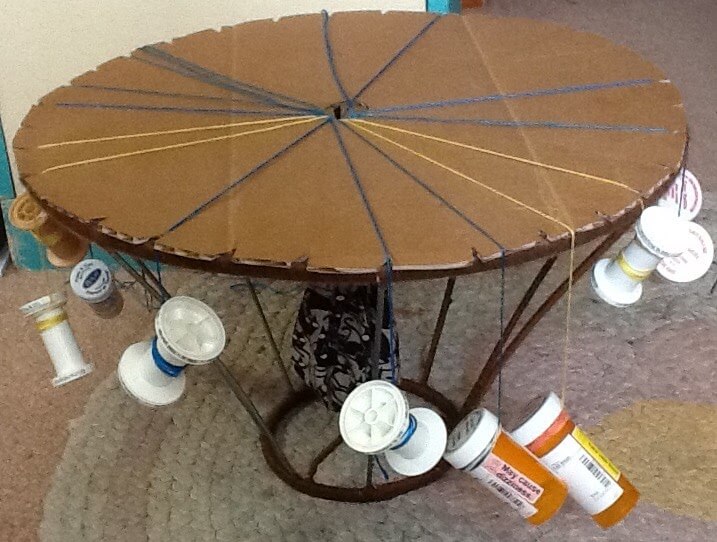 It turned out to be highly ineffective for several reasons. In the same book, there was an illustration of a traditional wooden marudai and its dimensions, along with the recommended size and weight of the kumihimo tama. Being a person who wants to do things properly, I used these diagrams to have a marudai and several kumihimo tama made by a local woodworker. Once they were ready, I was off and running. To date, I have made a few two-colored, four-strand cords on this much-improved setup. Here is an image of my attempts so far. 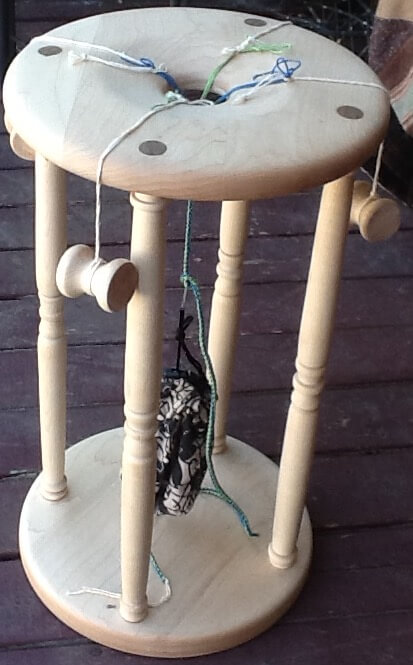 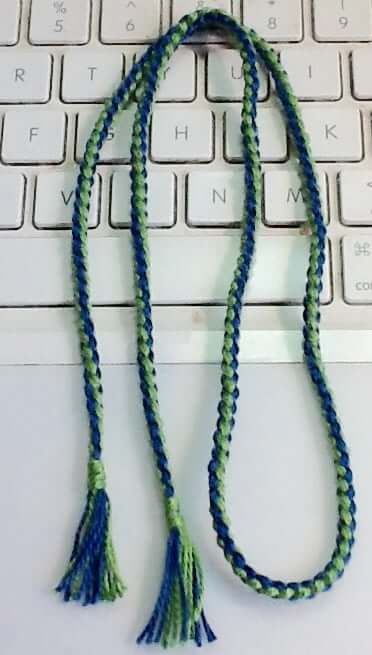 I plan to use these cords as drawstrings for boro-style bags that I make from time to time.

If you do a Google search for kumihimo frames, a variety of lightweight foam frames will come up. These are products that I have never used so I can not say how well they work. They look convenient for traveling, though. I would recommend the wood style frames wherever possible, but use what is available for you.

By looking more closely at what people are making, cooking, or just plain occupying themselves within sometimes “throw-away” scenes in anime and manga, a person can learn about some very unique and rewarding Japanese folk arts. Diving into learning how to create some of these cultural treasures helps keep these art forms alive and thriving, even on international shores. It can also give a deeper meaning to the stories that reference them.