Hold on, I think we’re getting a little ahead of ourselves here. Before we can fully appreciate the grandeur of Megumin’s entrance, we need to delve into her past and understand her as a person.

The opening volume of KonoSuba: An Explosion on This Wonderful World!, a new spinoff series from KonoSuba: God’s Blessing on this Wonderful World!, takes us back to a time before Kazuma (Kazuma desu). Back then, Megumin, the explosion-obsessed yet lovable mage of the party, was able to have other things on her mind besides gratuitous amounts of magical firepower.

In fact, she was actually at the top of her class at the school she attended in her village, beating out even Yunyun on the path to unlocking advanced magic. Yet, instead of a large magical arsenal, she somehow ended up just holding a very large detonator thanks to two rather large reasons…

For fans of the series in any medium, this is a great read for additional character development and world-building. I haven’t read all of the light novels at the time I’m writing this review, so I don’t know if it’s been covered already, but it was nice to finally be able to see the village of the Crimson Magic Clan and meet many of its… eccentric residents.

This first volume also allowed me to learn a bit more about how the magic system works in KonoSuba, as magic users transition from the basics to learning advanced magic. It is explained that there are different specialized branches of magic under the spell-casting category: blasting magic, detonation magic, and explosion magic. Of the three types, explosion magic is absolutely the most useless one due to its high skill point cost and many drawbacks. This type of magic is so specialized and removed from practical, everyday magic that pursuing it is akin to pursuing a PhD. The topic is something one has to be deeply interested in or involved with, and the outcome probably does have some applications, but most likely none are viable to use in everyday life for the average person (or in this world, magic users).

However, we soon see that it’s not all fun and games. While keeping up the comedy, this spinoff also provides some insights into the reality of this magical world. There are constant mentions of monsters lurking near the village and allusions to magical seals needing to be reinforced to continue warding off danger. In fact, the interludes between each chapter in the volume reveals that Komekko, Megumin’s younger sister, has made a rather… dangerous friend.

And though magically capable, the people of this village (and world) are still only human and definitely still have to deal with typical human problems. There are the usual love and relationship misunderstandings, bullying from classmates, constantly absent parents, and a lack of food to the point where Megumin’s dear familiar almost became her dinner on several occasions. 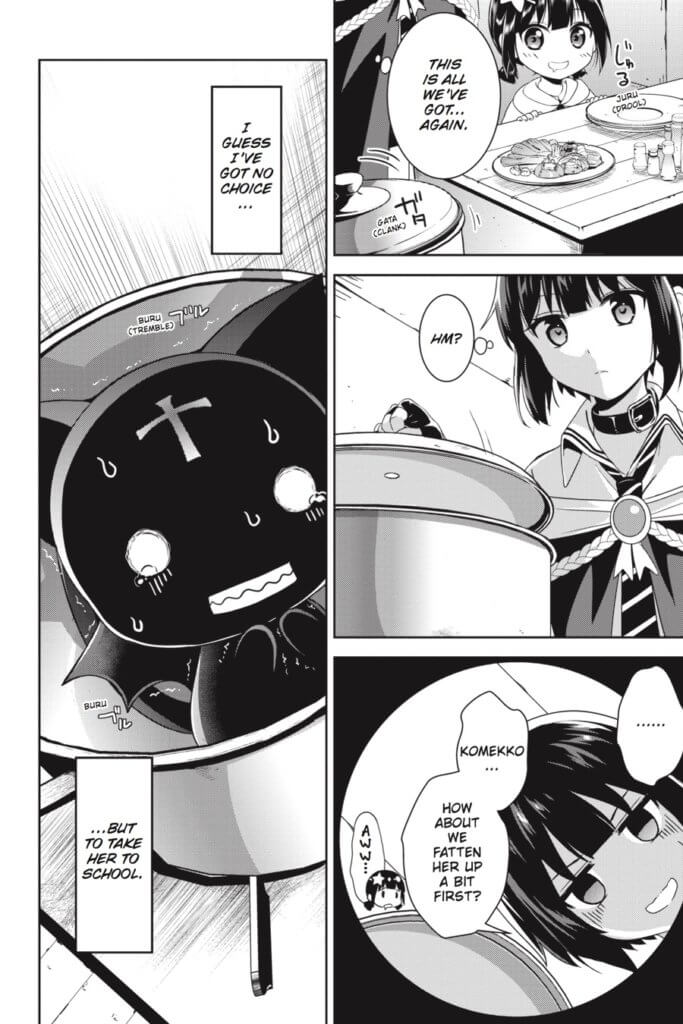 I think the world-building shown in the spinoff so far adds another layer of depth to the setting that isn’t typically seen in the anime, since it’s mostly filled with hilarious dialogue and gags.

As this is the beginning of a spinoff from the main series, Kono Subarashii Sekai ni Shukufuku o!, the biggest drawback to this volume is that it requires the reader to either have watched, read, or have knowledge of the main series in order to fully appreciate the characters.

The entire premise of this series is about the backstory of a character from the main source material, so it’d be more enjoyable to already have some sort of connection. Not to mention that there are references to other main characters, like Kazuma and Darkness, that wouldn’t be fully appreciated.

Overall, I thought the opening volume of this spinoff series is a lighthearted and enjoyable read for fans of the main series, Kono Subarashii Sekai ni Shukufuku wo! It goes into the backstory of Megumin, everyone’s favorite explosion-maniac mage, and her life in the Crimson Magic Clan village before eventually ending up in the town where she meets Kazuma. This volume also offers a fair bit of world-building, elaborating on human interactions and the daily life of people in this alternate world. However, readers should have a working knowledge of characters from the main series in order to fully appreciate the dynamics and references that appear.

KonoSuba: An Explosion on This Wonderful World! is published by Yen Press and is available from Barnes & Noble, and RightStuf.

For more information about KonoSuba: An Explosion on This Wonderful World!, visit Anime-Planet.

Special thanks to Yen Press for the opportunity to review this manga!