When you think of the term “coziness,” what comes to mind? Maybe it’s picking pumpkins in an orchard. Maybe it’s mulling cider low and slow while you bake up spiced granola and drink the magic of pumpkin spice. Maybe you’ve tasted just a bit of cottagecore, and this far into COVID-19 lockdown, it’s every bit embraceable.

Cottagecore is an aesthetic and lifestyle based on western farming, and contains several subcategories such as grandmacore and fairycore. It’s filled with ideas of traditional crafts, like baking, foraging, knitting, frolicking in the woods, and, well, enjoying life as though lived in a cottage surrounded by wildflowers.

And yes, maybe, just maybe, it’s like being a witch, with all things cozy at your fingertips.

Cottagecore: It’s in Your Anime

You, like myself, may or may not have spent hours poring over the first volume of the manga or the first episode of the anime, looking at the adorable cottage Chise lives in. Or, at the very least, staring agape at the artwork that seems to ooze coziness from its pores.

If you are new to cottagecore, let’s take a look at some of the ways The Ancient Magus Bride promotes and showcases it. 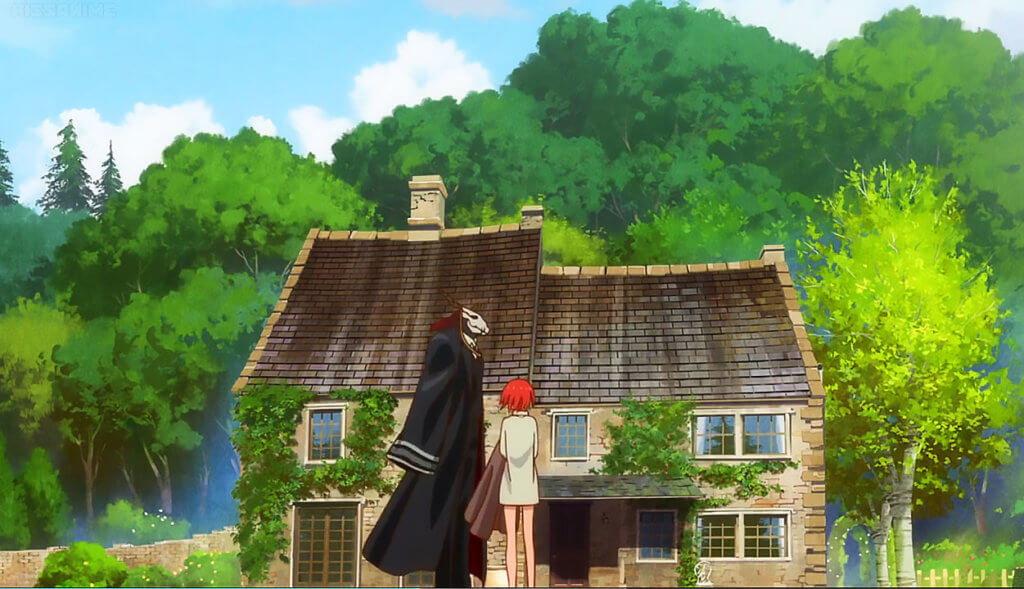 First of all, let’s focus on Chise’s new living arrangements. Elias Ainsworth, the being with whom Chise starts a new life with, lives in a lovely cottage in Britain. The scenery appears picturesque. Set in the countryside, the cottage is surrounded by fields and hedgerows and what I imagine are wildflowers.

Elias and his housekeeper, Silky, also seem to maintain an herb garden. I imagine Silky choosing mums or sweet-pea flowers to set the table with. Thyme, oregano, rosemary, and sage all grown to compliment her cooking. And who could forget the bevy of herbs drenched in moonlight and sunlight, graced by magic, to be used in all sorts of remedies and potions? The rustic feel makes you sigh and relax, as you repose in the countryside, free of any troubles. You can just imagine frolicking on sunny days, running your fingers through the grasses as a faint breeze ruffles your hair. 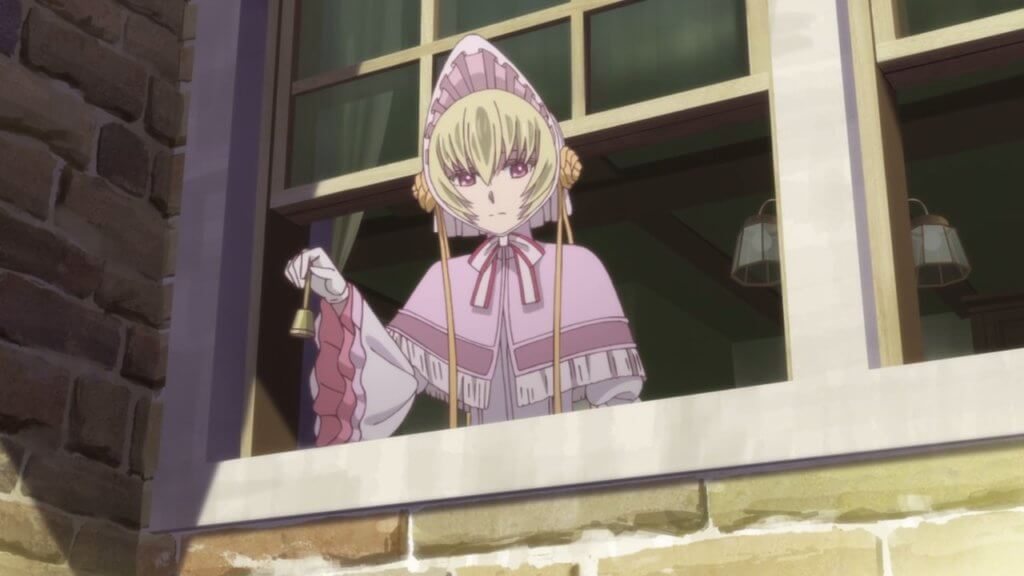 The cottage is maintained by Silky, who not only looks out for the various magical creatures that come and go, but also most importantly, watches over Chise. Silky carries the very image of cottagecore with her. Throughout her day, she wears a pink Victorian dress, including a shawl and a bonnet. Not many housekeepers or even those of us who stay at home to work take the time to dress-up, especially in something as distinctive as a Victorian-style dress.

To add to her sense of coziness, Silky is also a proficient cook, especially with British-style pub-fare. Think of the kind of dishes and drinks that will warm you up on a cold night: gratin, stew, chamomile tea. Speaking of Britain, Silky may also be modeled off of the mythical Brownies of yore. These are creatures or fay from folklore that are thought to clean buildings they reside in, or occasionally help humans.

Every now and then you may notice a cup of cream left on the mantle of the fireplace in the cottage—oftentimes to show a Brownie gratitude, you leave out a little cup of cream.

Even a Thorny Creature Can Be Cozy Inside

Thorns aside, Elias, too, tries to embody the aesthetic of cottagecore, perhaps more than anyone else.

If we want to take the idea of cottagecore deeper, beyond an aesthetic or a mood-board we aim to live out, cottagecore also embodies ideas of family, the familial, and the familiar. That is to say, it strives to encourage us to surround ourselves with the comforting, familiar things of our lives. The things rooting us, and grounding us down.

Elias and Chise meet halfway on this point.

Chise comes from a painful, broken life, where there isn’t much in the way of the family nor of things familial. Her life has been touched in a way that’s hard to describe (and harder to watch), but some of us may know about. Elias reaches out, by way of acquiring Chise, and tries to bring some sense of coziness into her life. He begins to unfold his reasoning–for bringing her on as an apprentice and future wife–and in the process also models healthy ways of thinking and being. He showcases healthy friendships with others like and unlike him, and also shows how to establish boundaries as needed.

Believe it or not, these are also important aspects of cottagecore. In another light, we could think of it as: Well, if I want to grow the prettiest garden in the world (literally and mentally), how can I do that? How can I cultivate the mind and the way of cottagecore?

The way is many and ripe for the picking.

More Cottagecore: How to Keep The Vibe Going

Some days you just wanna live and breathe cottagecore.

To fully create the vibe at home, I recommend lighting candles. These can be scented, such as spiced-apple, or unscented (they look just as pretty). Place them by a windowsill—this makes for a cozy atmosphere at night, and keeps out any unwanted, lingering spirits. You might also enjoy gently mulling cider on the stove. Try this Mulling cider recipe by the Kitchn,  which requires no baking and no fussing—just set it and forget it. The smell will also permeate your home *ahem* cottage for days to come.

For those already familiar with the universe, these stories paint even richer pictures of the world Chise and her friends inhabit. The stories are not sequential and most are stand-alone. Plus, this is more for our imaginative cottagecore minds to feed off of.

Now that the vibe has been set, you can reap the benefits of a cozy cottage and can read manga or watch anime to your heart’s content.

However, if you’re looking for other titles, look no further. We have new suggestions sure to pique your interest.

Laid Back Camp by Afro

This manga is all about taking time in nature to enjoy scenery, cooking, and the company of good friends. The mood is lighthearted and I was definitely persuaded to spend a night in the woods after just reading volume one. You can watch Laid Back Camp on Crunchyroll and purchase Laid Back Camp from Barnes and Noble.

Go with the Clouds North- by-Northwest by Aki Irie

Taking place In Iceland with just a touch of magic, this manga is a perfect combination of wanderlust and armchair explorer. The artwork is gorgeous and you’ll find yourself wanting to take the next flight to Iceland. No anime (yet!) but you can still read Go with the Clouds North- by-Northwest on Vertical.

If you find yourself wanting to look for even more cottage-core-style Japanese content, definitely check out the February 2021 new releases. Remember, take the time to find your own slice of cozy.