Tokyo is a city of many secrets, from bars hidden away on the top of buildings to a city-sized water tank built underneath the city to mitigate the effects of floods. You can walk down any number of the alleyways that are tucked behind the skyscrapers and you’ll be guaranteed to find a hidden gem.

This is the story of one of the least-visited shrines in the heart of Akihabara–the Hanabusa Inari Shrine. 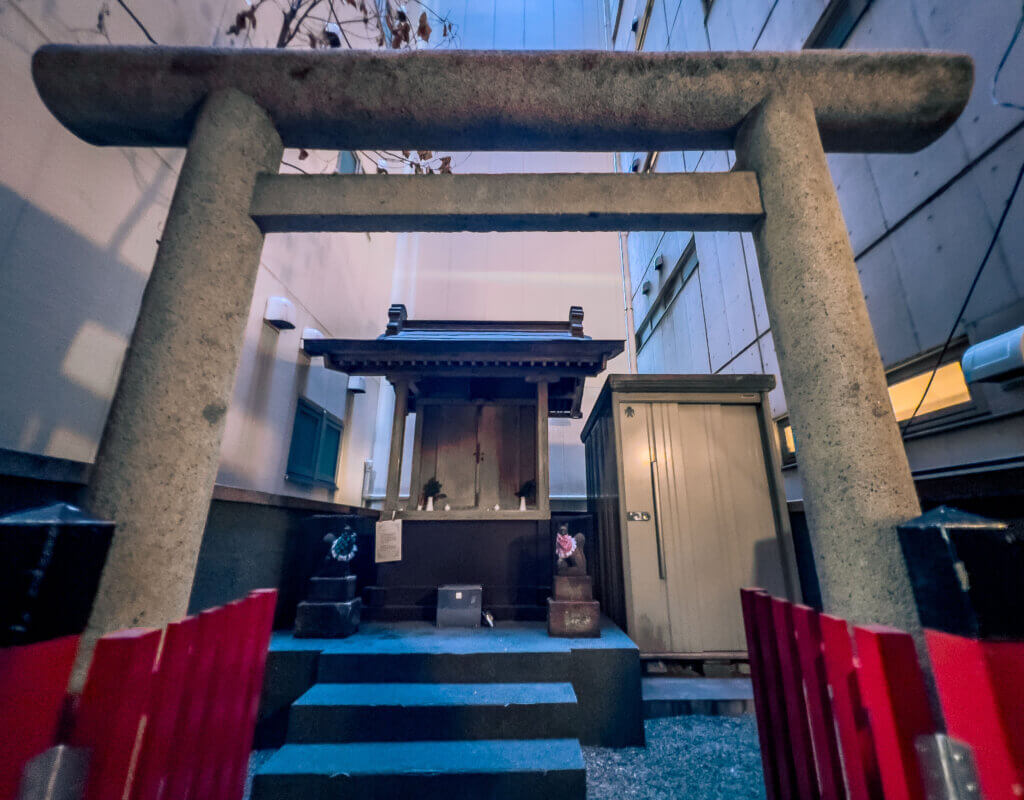 When Was Tokyo’s Hidden Shrine Built?

Before Tokyo became, well, Tokyo, it was known as Edo until the Meiji Restoration in 1868. Edo was named when the Tokugawa shogunate took power in Japan and moved the administrative capital of Japan from Kyoto to Edo in 1603. It is said that it was during the Edo Period–which also ended in 1868–that the Hanabusa Inari Shrine was built in Kanda, though not in its current form.

During the air raids of Tokyo during World War II, much like surrounding areas, the Hanabusa Inari Shrine was destroyed. After the war ended, the local residents banded together to rebuild the shrine in its current location, as they claim that the shrine has been a symbol of the region since ancient times.

However, any research into the shrine’s origin is muddied by the passage of time and the lack of records that were kept from over 400 years ago about a tiny shrine.

Where is Akihabara’s Hidden Shrine? 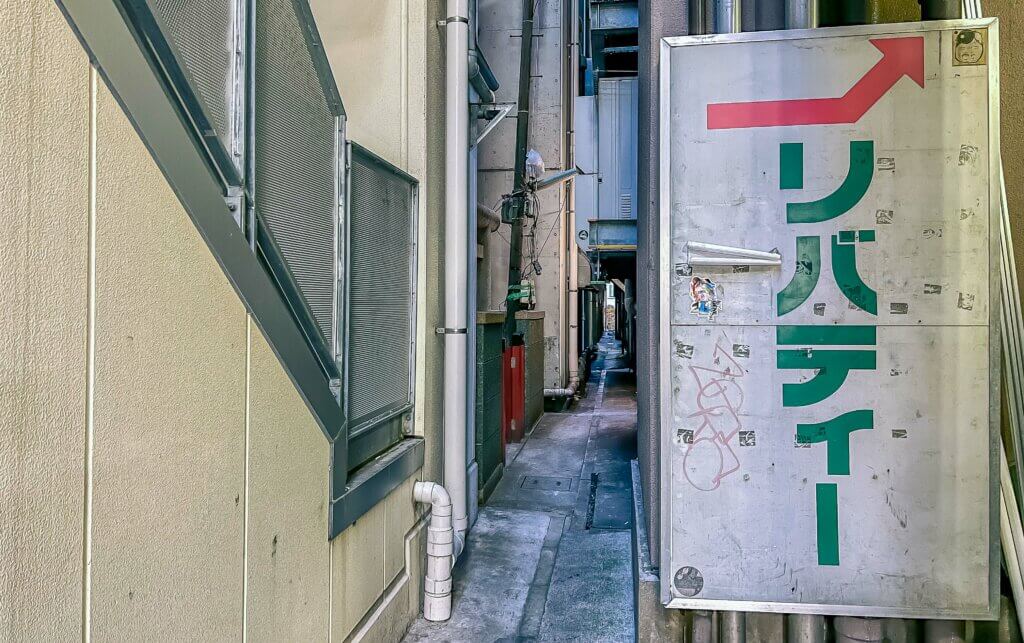 Surprisingly, getting to the Hanabusa Inari Shrine is actually pretty easy. Walking up the main street of Akihabara from the JR Akihabara train station going north, you’ll come across a Carl’s Jr with a little alley next to it. The shrine is through there. See? Easy!

Though I don’t recommend going through that alleyway–it’s too tight, and there might be some nasties lurking between the two buildings. Instead, walk a little further and you’ll find a store called Liberty on the corner of a side street. Go down that side street and you’ll find a much wider alleyway, across from some gachapon, that is far easier to walk. Head down there and you’ll find the small shrine nestled between the highrises of Tokyo’s electric town.

How To Get to Hanabusa Inari Shrine

This alleyway leads to the shrine itself, though isn’t recommended to walk down: 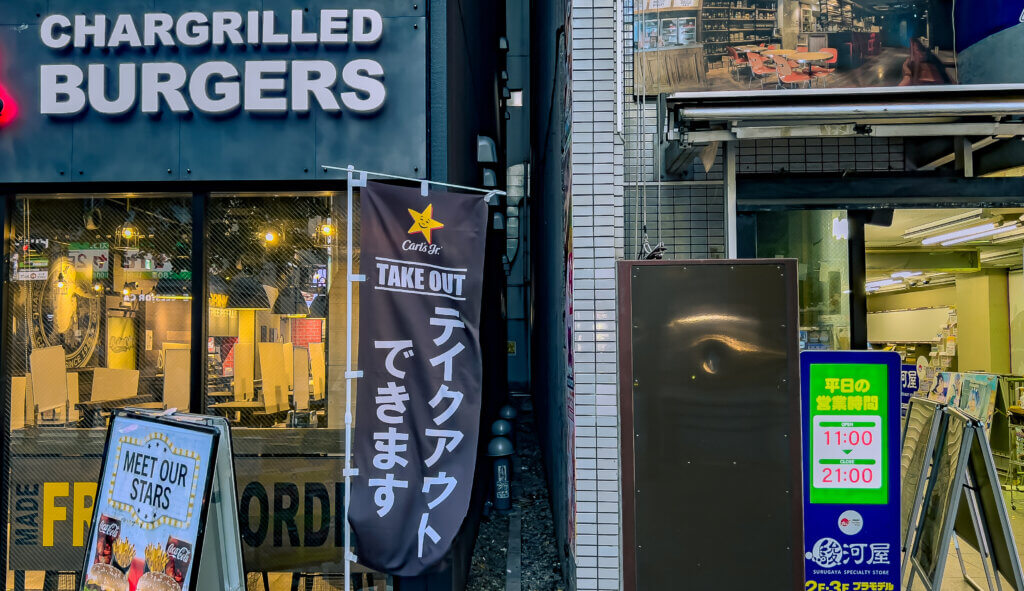 Find this side street and walk down it: 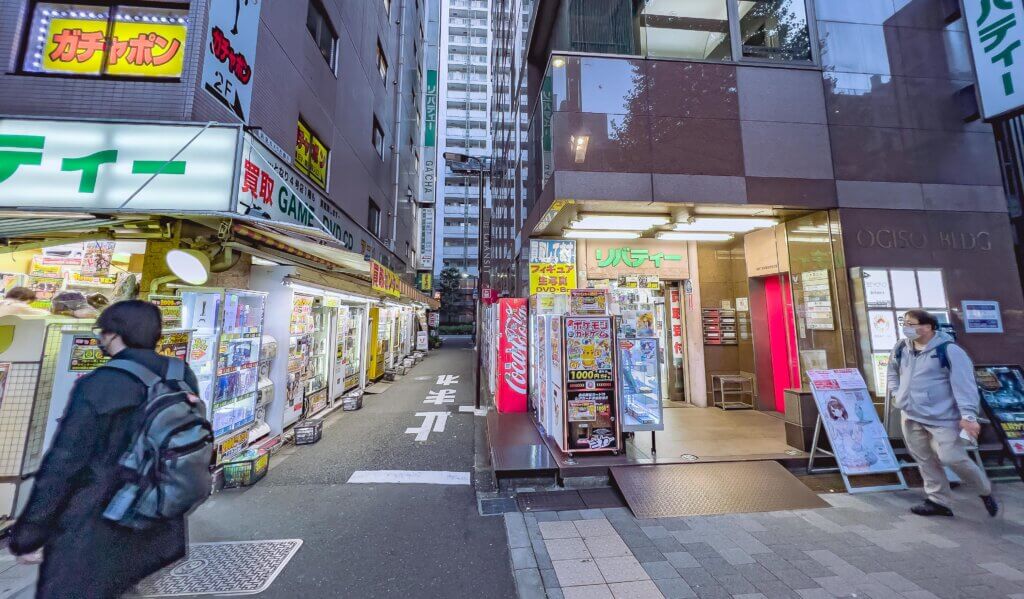 If you look to your right, you’ll find this alleyway–don’t worry it’s bigger than it looks here: 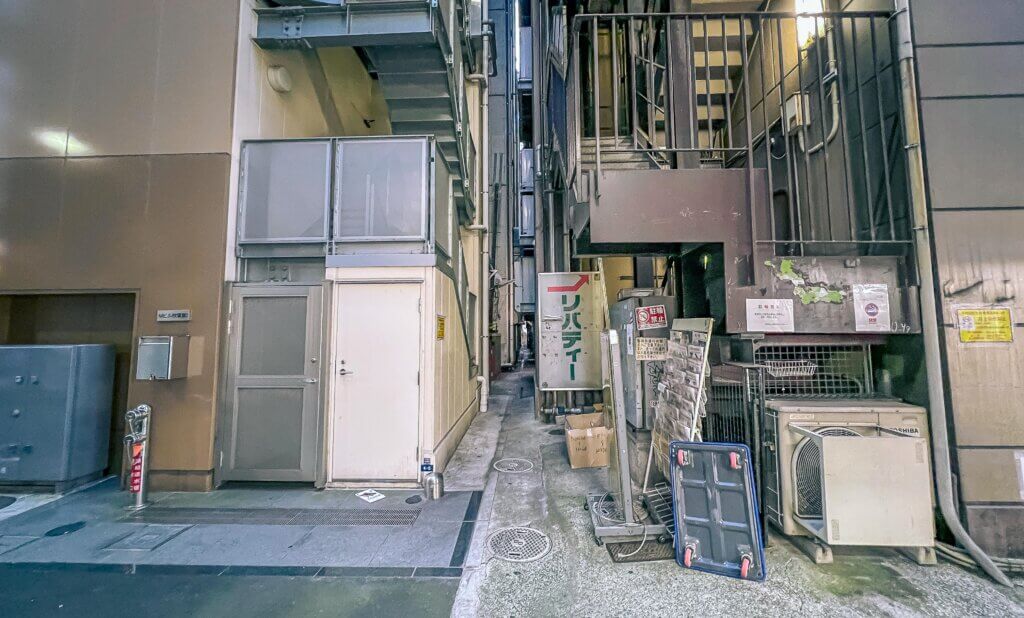 The same alleyway from in front of the shine: 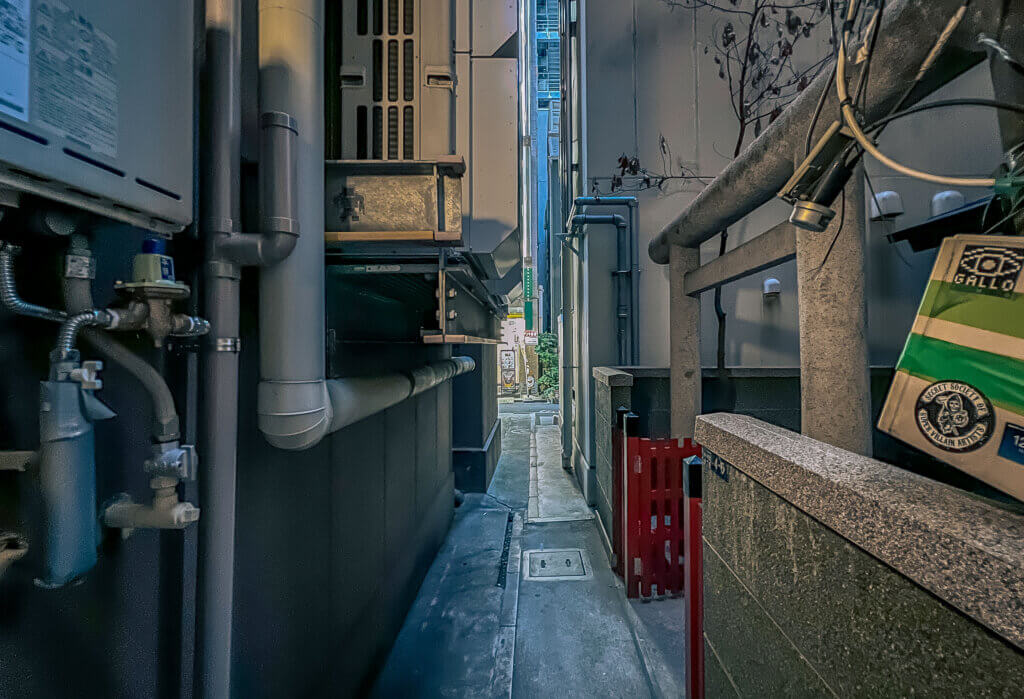 Despite the flow of time and the constant renewal of everything in Tokyo, one would think that a tiny shrine like the Hanabusa Inari Shrine would have been lost to the years, but it is still standing after god knows how long. There’s something magical, almost Ghibli-esque, about just wandering down a discreet alleyway in one of the more high-tech areas of the world and finding a well-maintained piece of Japanese history.

Yes, you have the big Kanda Shrine, as well as many others littered all over Tokyo, but they’ve all been modernized in one way or another–whether that’s through a playground, lighting systems, or any other 21st-century convenience. The Hanabusa Inari Shrine is different; its elegance and beauty comes from its simplicity. The most modern thing on the shrine is the address plate and an electric pole that was erected just inside the grounds–gotta find somewhere to put those things! 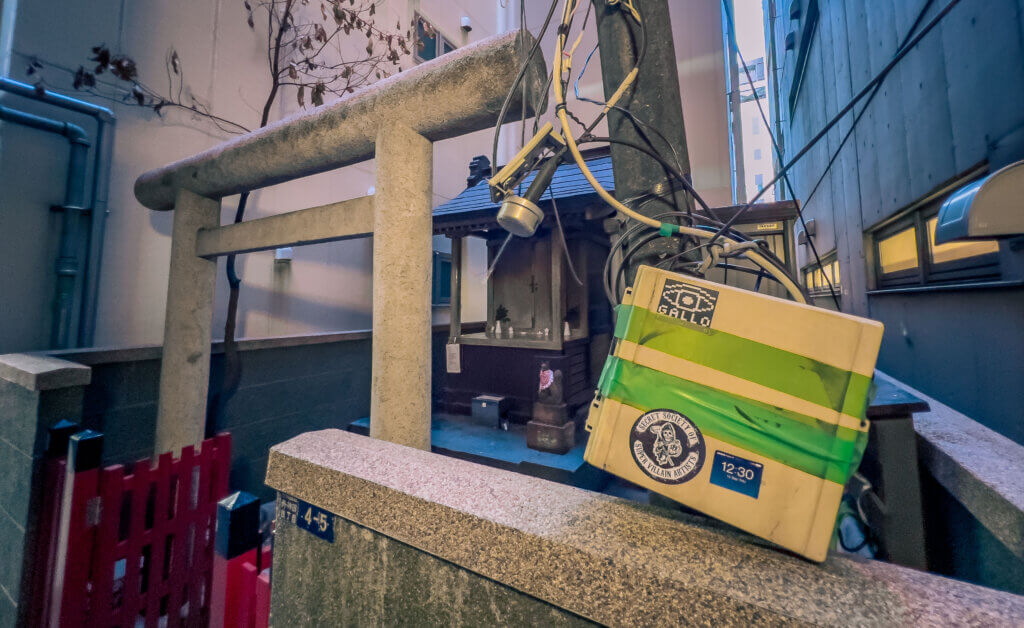 The Hanabusa Inari Shrine is dedicated to Uda no Omachi, a food deity. While back in the day when it was originally built the area was likely used by farmers in the swamp that was Edo, fast-forward to now and the mad scientists of Akihabara rarely need to pray for food–as a convenience store is a stone’s throw away–, unless there was an eatery right in front of the shrine…

Ironically, when the buildings in front of the shrine were renewed in the mid-2010s, a bunch of restaurants opened up inside them, including the Carl’s Jr I mentioned before. Prior to knowing about the shrine, I had already tried a bunch of eateries inside the two buildings and found that they were all actually pretty good, which for Akihabara was a win. My personal favourite restaurant in the stack is Meat Winery, which, as the name suggests, has great meat and decent wine, as well as a great view of Chuo Dori at night time.

According to the Visit Chiyoda website, a tourism website for the area, the Hanabusa Inari Shrine has a festival on April 10 every year, though it doesn’t mention if they have been running during the past few years due to current events. 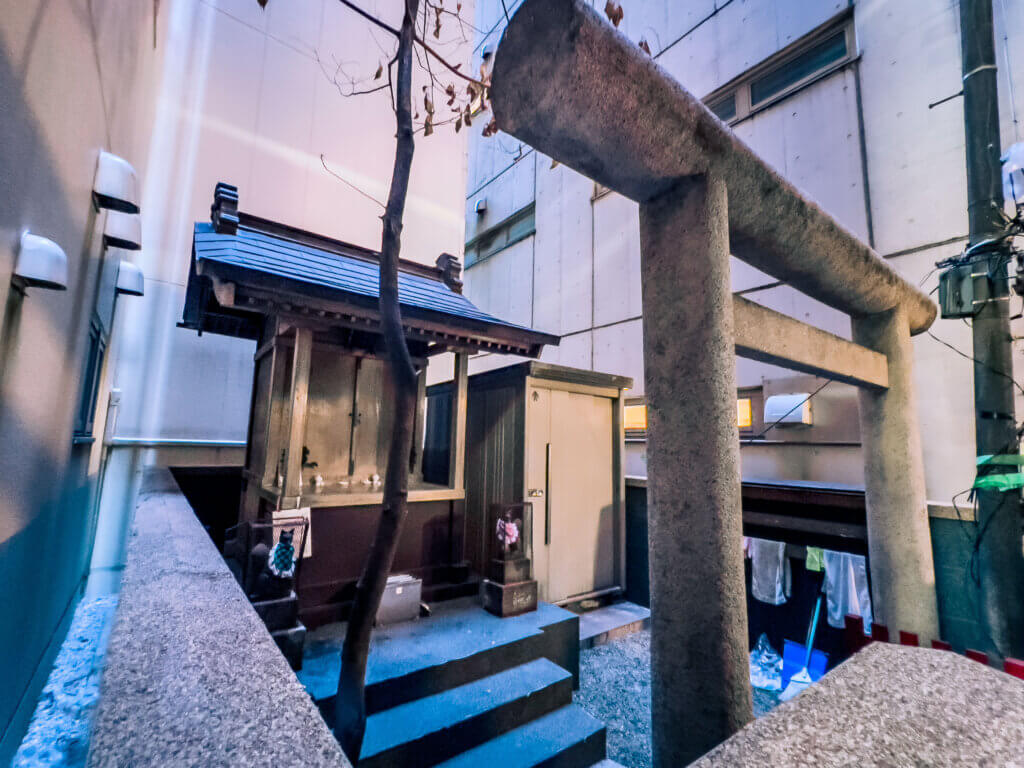 I would wholly recommend visiting the Hanabusa Inari Shrine the next time you’re in Akihabara. It’s a quiet escape from the overwhelming nature of the area that is pretty easy to find–just make sure to respect the shrine for the heritage it has.