It’s a common refrain when I talk about One Piece as a series, said half-jokingly and half-serious. Because in one sense that is what Eiichiro Oda’s massive shonen adventure series is. From those humble beginnings on Shonen Jump in the misty bygone era of 1997, One Piece has always been about silly pirates with silly powers having strange fights and visiting strange places.

Monkey D Luffy is a giggling rubber child who fights clowns that come apart like Mr. Potato Head dolls. He wrestles sea monsters on a quest for a big shiny coin and meets talking animals who ride flying fish. His companions are no less absurd – such as Zoro the samurai who wields three (3!?) swords at once (including one clenched firmly in his teeth), or Chopper the silly reindeer doctor child who eats magic gumballs to turn into different off-brand Pokemon. One Piece is a world of child-like whimsy, where ships sail up waterfalls that lead to floating islands and chunky sea horses act as taxis in would-be Venetian metropolises.

One might think it was a manga for children.

More Than Meats the Eye

But that’s not the entire picture. One Piece most certainly is a manga for children about adventure and silly gags and talking skeletons with afros – none of those elements are unimportant nor are they disingenuous. However, there is another powerful current that runs through the series – one that deals with trauma, heartache, and state-sanctioned violence. I hesitate to say it lies “beneath” the silly pirate themes because that would make it seem like those were unimportant or a farce – just a front for the “real” heavy themes of the series.

That is certainly an argument one could take. It is serious material (especially when the flashbacks start), and it touches the lives of the entire crew. Every character on the main cast of the Straw Hat pirates is dealing with some sort of trauma:

For all the whimsy in the world of One Piece, there is also a great deal of turmoil. The World Government is on its face a vast political body of 170 nations, maintaining order against the external threats of piracy and lawlessness. Early introductions and assumptions about the World Government make it appear to be a system working to preserve a hard-fought peace in a troubled world.

The reality is much more brutal. The World Government is not maintaining peace, but rather protecting certain groups at the expense of all others. The truth is that the World Government is essentially overseeing a number of overlapping powerful entities who are all in constant conflict – the Navy, the Seven Warlords, the Four Emperors, the Celestial Dragons – and that they benefit from the status quo of misdirected violence.

With these various power players constantly fighting one another, essentially surrounded by and surrounding one another in tandem, there is no opportunity for a unified threat to their control. Each of these groups is like a great buzz saw hurtling towards one another, and when they crash, sparks fly and people die. It is in the erratic friction between these massively powerful groups where so many of the heroes, villains, and everyday people in the One Piece world find themselves victimized and traumatized.

It can be hard to reconcile these two seemingly conflicting tones – silly and serious, adventurous and agonizing, romp and realism. I think you could argue that they are pacing mechanisms, and that like most good tales there needs to be a variety of emotional beats to maintain audience interest. Sometimes our minds need a break from too much of the same tone; a moment of levity when times are heavy or a somber reflection during celebration can both act to remind us that all of life is not comprised of a singular emotional state.

Yet in One Piece’s specific case I think Eiichiro Oda intends a little bit more – I think the silliness and the seriousness are intrinsically linked.

One Piece is about finding peace in the chaos. When genocide and inequity are the norms for the citizens of the One Piece world and when governing powers use Might and Right as synonyms, the only refuge against the cruelty of the political sphere is the healing power of the personal sphere.

Each crew member has an individualized trauma that is healed by the common bond of friendship. Not just alleviated or overlooked, but healed. We see change – like Chopper finding not just personhood in the eyes of the Straw Hats but acceptance of his ‘monstrous’ self, or Nico Robin’s gradual willingness to uncoil from her tense life on the run and let out a smile every now and then – that only comes from the close bonds of found family. Monkey D Luffy’s relentless willingness to befriend those around him is not a side-story to the abuse of these vast entities, it is explicitly and textually the antithesis of those political bodies: Luffy’s order at Enies Lobby for Soge-King to take down the World Government flag is the clarion call.

Luffy would tear down the entire world order if it threatened even one friend. 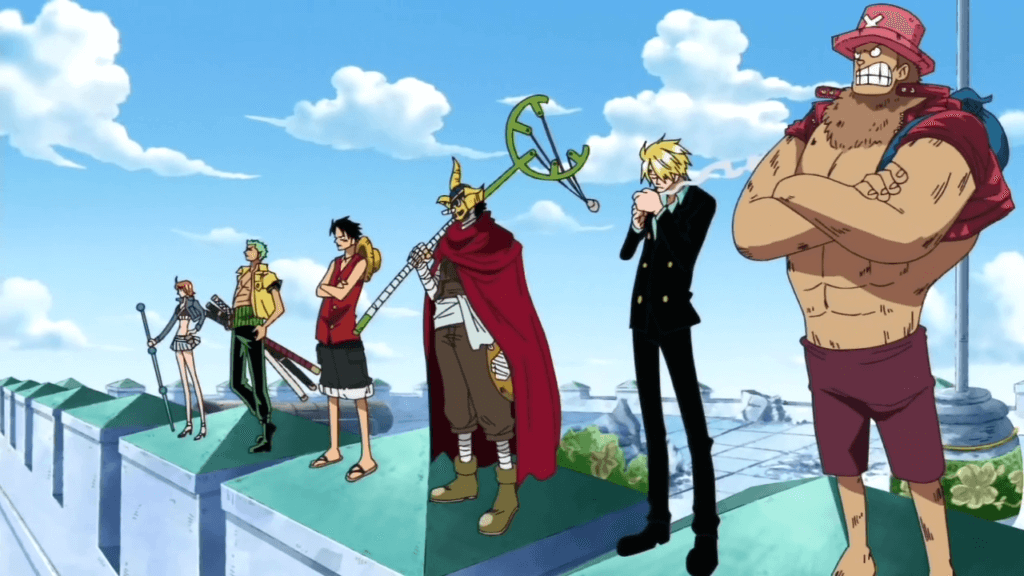 That is part of why the Enies Lobby arc profoundly resonates with me. Luffy saw that to save Nico Robin meant taking on the World Government (not to mention the various powerful entities that supported it) and he did not even flinch. No hemming and hawing over the right course of action, no hesitation in the slightest. If they would dehumanize a friend then he would challenge them head-on and not only win the fight but help give Robin a sense of self-worth, rekindling a fire that went beyond the need for survival and into a true joyful desire to live. I do not think it is a coincidence that the World Government not only tolerates but actively encourages slavery, Fishmen trafficking, and other heinous acts; nor do I think it is a coincidence that the Straw Hat pirates are liberators everywhere they go.

Yes, sometimes One Piece is funny purely for comedy. Not every chuckle has a motivating political force behind it (Zoro gets lost and that’s funny every time of its own accord), and not every fight has broader political ramifications. But I think it is important to view the Straw Hat pirates’ friendship dynamic as being more than a reprieve between action scenes – I think it is meant to be an almost idyllic counterpoint to the world constructed by malicious governments throughout the rest of the setting.

The scenes on the Merry Go and Thousand Sunny are almost dream-like: vast sparkling blue oceans, limitless azure skies, and the warmth of family and fellowship between this loveable cast. I can think of no better analogy than Nami’s orange tree. The painful memory of family lost becomes the seeds to grow a new tree bearing the fruit of hope at the heart of the ship she’s navigating.

One Piece is about finding, well, one peace born from many wounds. All of the Straw Hat pirates have trauma behind them from the ills of the World Government, but with dear friends at their side, they can go forward to a new place beyond the horizon. I believe that Luffy’s desire to be King of the Pirates is more than a statement of power level – he wants to make a new world. Monkey D Luffy’s boundless enthusiasm for child-like friendship is his defining trait. It is what will give him the strength to defeat the World Government and replace it with a new sense of justice. Luffy is full of abundant compassion for others and this is beyond emotional release for the viewer. His compassion is expressly a statement against the capricious powers that be.

After all, there can only be one king – and that boy will be King of the Pirates.