We’re back, folks! In case you’re new or have forgotten, our First Impressions series usually works like this: in the weeks leading up to the start of a new anime season, we run a poll so readers can vote on what new shows they’d like us to cover. We tally up the votes, and the top 3 (sometimes 4, in the case of a tie) get their first episodes reviewed by some of our writers. This season, our winners were Love After World Domination, SPY x FAMILY, and Shikimori’s Not Just a Cutie. Of those three, Love After World Domination is the first to air. 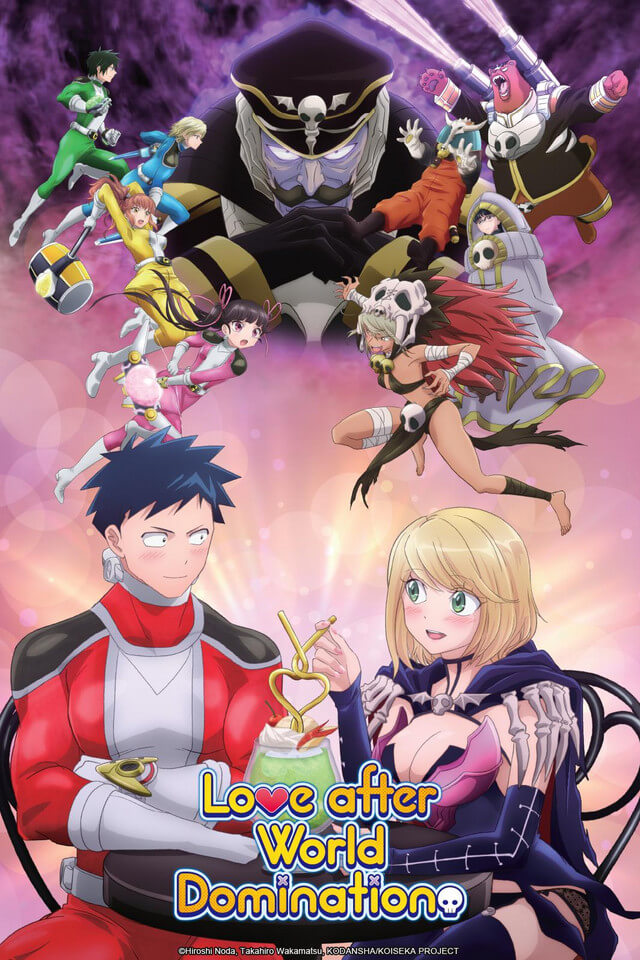 There are two sides to every coin…light vs. dark, good vs. evil, love vs. hate. Sometimes the line between the two grows thin…and it’s so, so easy to cross. So it’s no surprise that Fudo Aikawa, A.K.A. Red Gelato of the Gelato Five and hero to all people, just may have happened to fall for the villainess and member of the shadow organization Gekko, Desumi Magahara! But when opposites like these attract, there’s more than a few obstacles to their love…! What’s a pair like this to do? – Kodansha

This modern-day, rom-com take on the Power Rangers is full of everything you would expect: dastardly villains, action-packed fight scenes, and more than one dawww! moment.

The first episode of Love After World Domination is so sickeningly cute and so jam-packed with nostalgia, it’ll be a miracle if you don’t come away a little lightheaded or queasy. And that sudden urge you get after the episode is over to slip on your morpher, dig out your Megazord from your parent’s attic, and start binging your favorite early morning 90’s cartoon? Don’t worry. Those are all perfectly normal symptoms (for anyone born before ‘95, at least).

Seriously, though, this show has a lot of promise. For anyone who can harken back to the days of Fox Kids, Love After World Domination will hit you in all the right spots. The magical girl-esque transformations, the catchphrases, the hundreds of minions that go down with little more than a kick–all of these pay homage to the Power Rangers and other sentai works in a brilliant way. But by no means do you have to have fond memories of squadron shows to get a kick out of this one. The characters, voice acting, story, and art all culminate in a laugh-out-loud comedy with more than a few adorable budding romance moments snagged in-between intense fights. The best part of it all is that the show does not take itself seriously. Love After World Domination is the type of story that anyone looking for a good laugh can enjoy, and I think it’s that feeling of ease it evokes that will become its best selling point.

Will I be counting down the hours until the next episode airs? No. The show doesn’t instill that sort of urgency to watch it. Instead, similarly to when I was a kid, I’ll wake up one morning, turn on the TV while I eat breakfast, and break out in a smile when I see there’s a new episode available.

Love isn’t just a war this anime season, it’s also trying to take over the world. Love After World Domination is just one of many romantic comedy anime this spring, and I’m more than excited to see the genre is taking over anime – move over isekai, wholesome is the new in thing!

Love After World Domination takes the rom-com genre and throws it into the world of Super Sentai, making the leading couple an adorable Romeo and Juliet couple with the male as the hero and the female as one of the leaders of the villainous organization. Though this doesn’t mean she wants saving or the like, she’s more than capable on her own, as far as the first episode portrays.

With Rascal Does Not Dream of Bunny Girl Senpai assistant director Kazuya Iwata as the lead on Love After World Domination and Chi’s Sweet Home’s character designer Akemi Kobayashi making sure the characters look as cute as they are, it’s no wonder that the first episode is full of sweet moments between the two leads as we learn how they met and got together. Which by itself was also nice, no umming and ahhing, will they or won’t they here, just pure steadiness.

One of the most interesting aspects of the episode was the animation, in some parts it was noticeably off-model, which I love, while some of the animation was just outstanding – especially some of the character moments and then in the first action scene. It was incredibly grabbing for fans of both action and drama anime while keeping in the true spirit of the Super Sentai genre. The opening showcased some of the prettiest animation this year.

I laughed until I cried, loved the Super Sentai-ness of the show, and had my kokoro go dokidoki from all the wholesome moments. Love After World Domination is definitely a must-watch!

My main concern is how long it can stay funny when it only has one joke. It’s a good gag, but “they try to go on a secret date and have to pretend to fight when they’re seen” may not have the mileage the creators are hoping for. Maybe it would have worked better as a short? Time will tell. As it is though, I liked it plenty and am happy to give it another few episodes to see if it can maintain this level of cute and funny.

You can watch Love After World Domination on Crunchyroll.