When a name becomes synonymous with tragedy, we lose so much. We lose the times that were, lives lived to the fullest, and memories made. We lose the now, with homes emptied and communities shattered. We lose what could be, as a shadow looms over every event thereafter. Fukushima endured not one such traumatic event in 2011 – a massive tsunami – but another as well, in the form of the nuclear plant disaster that followed. As with anything in life, people try to come to terms with what they have gone through. With an event on the scale of Fukushima, this becomes a communal process on a national level. A singular event viewed through countless lenses and with innumerable perspectives. 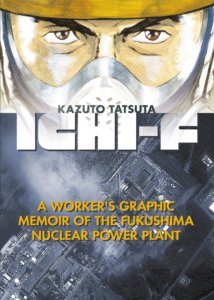 Kazuto Tatsuta’s Ichi-F: A Worker’s Graphic Memoir of the Fukushima Nuclear Power Plant is one such view of Fukushima, and a unique one at that.

‘Autobiographical manga’ is an interesting method to explore the event, to say the least, particularly because of its rather mundane approach. Instead of being a dramatized tale of the tsunami or the harrowing hours when things first went awry, Tatsuta tells the story of his personal role as part of the cleanup crew. Told in a series of small vignettes set during various points of his multiple stints at the recovery site, Ichi-F is not even a traditional linear narrative. These are personal recollections at a job – albeit a unique and at times dangerous one – without any clear progression or singular focus. If you are expecting a fictionalized account with high-octane action, a blockbuster disaster epic, or a stunning political thriller full of twists and turns, you will need to look elsewhere. For someone who is a capable mangaka and has worked at one of the most high-pressure job sites on the planet, it’s disarming how mundane Tatsuta’s Ichi-F is at times.

Yet it is precisely this mundanity which gives the work such unique strength. Kazuto Tatsuta has a mind for detail, and brings the Fukushima worksite to life in vivid specificity. His range as an artist is particularly noteworthy. His character designs are full of subtle expressiveness, his architectural work bursts with verisimilitude, and even his exaggerated comic-book flourishes have warmth. Whether he is discussing the layers upon layers of gear they had to wear within the irradiated zone, the exhausting commutes to and from the work site every morning, or even the banality of filling out paperwork to apply to different contractors, Tatsuta shows the reader that reality with such exhaustive detail it is hard not to be engrossed. 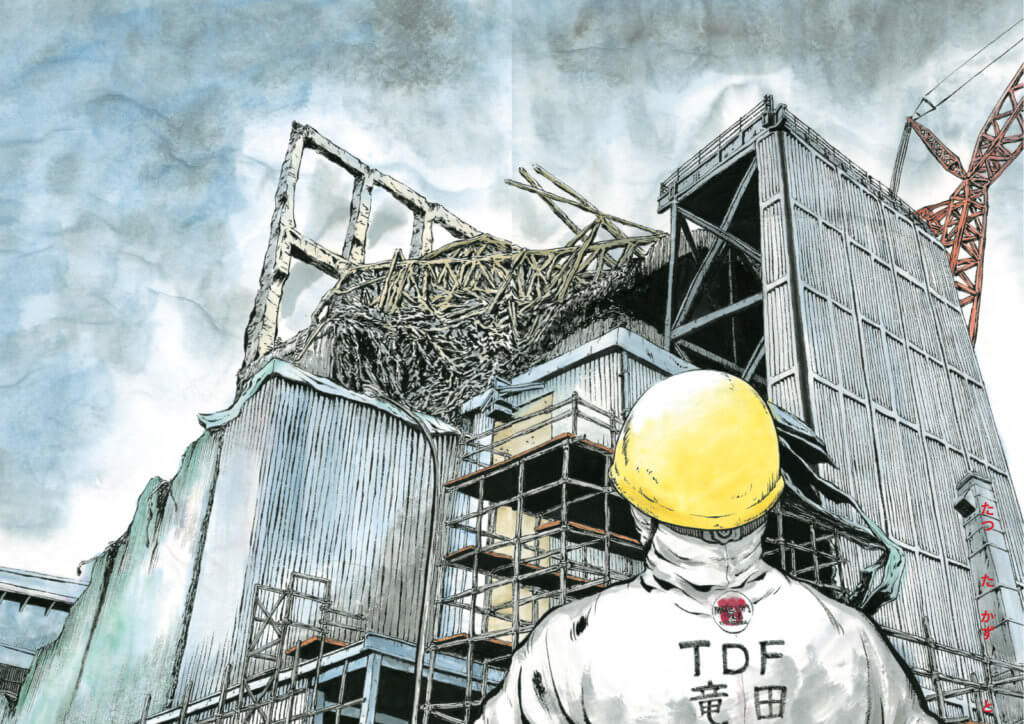 That is not a term I use lightly either. I would seldom describe watching someone get dressed, then undressed, then dressed for work ad infinitum as engrossing, but that is the effect over time. Watching Tatsuta detail each layer of their protective suits, showcasing which ones have to be thrown out, and explaining what happens when radiation is detected during one of the multitude of checkpoints – it draws you into the experience in a way that is both relatable and alien. Ichi-F exists at the intersection of the mundane and the mesmerizing, the monotonous and the exceptional. Kazuto Tatsuta takes the reader on a journey through one of the most incredible cleanup efforts in history without ever failing to remind us that it is, at the end of the day, a job.

Tatsuta sticks to detail but does not shy away from commentary completely. Much of the work is concerned with relaying his day-to-day experience in (what he hopes is) an unbiased manner. Given that the subject matter is about the large-scale response to the Fukushima disaster, it’s initially surprising how apolitical Tatsuta is. Discussing Fukushima at all tends to conjure up topics like environmentalism, energy safety, government response, and the effects of fallout. While the work does not entirely sidestep those discussions, it is by and large disconnected from such discourse. The author admits that he was not part of the initial response (it took him months and months to even land a job and make it to the site), and that his focus is on sharing the day-to-day experience of the workers doing the actual cleanup. 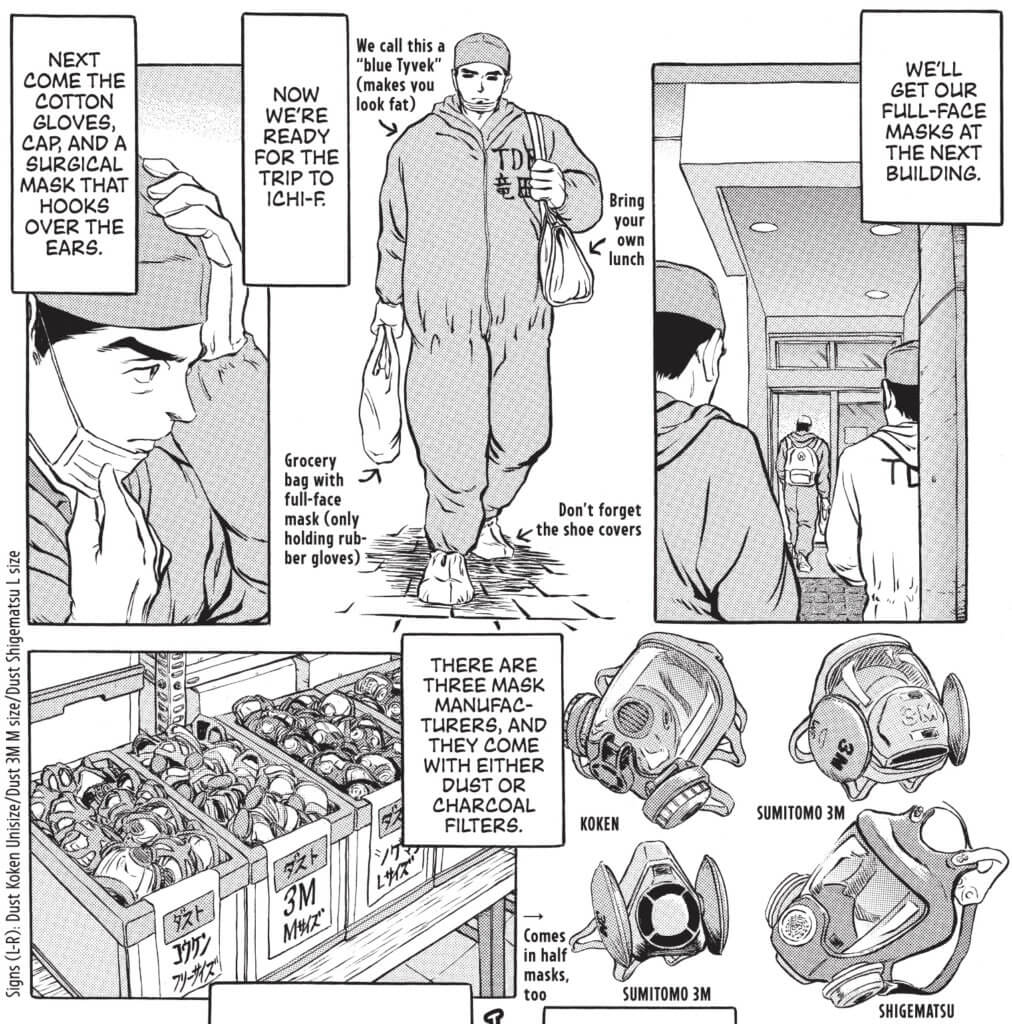 Tatsuta’s kindest regards are reserved for the common people. A number of small vignettes take place in local establishments in the towns surrounding the disaster site. These areas have taken on former residents forced to evacuate the disaster area, and involve Tatsuta’s interactions with them (usually in the context of open mic nights). The palpable sense of loss that these people have experienced deeply moves him, and he finds that he shares a common bond with them over a love of old music. Tatsuta does not fancy himself as much of a performer – he also does not speak terribly highly of his work as a mangaka, although he is quite skilled – but it serves as a creative outlet for him between shifts at the cleanup site. The people, too, find joy in his performances, a sweet connection with the past where much of their personal history has been taken away by the disaster. Tatsuta’s reflections are bittersweet on this note – glad to have that time with them, saddened that they may never be able to return to their homes in their lifetime.

The entire manga is not completely saccharine though, as there are moments of criticism peppered throughout. Most of Kazuto Tatsuta’s sharpest barbs are for the media and public perception of events. Sensationalized journalism is frequently lambasted as a way for talking heads to make big headlines, while Tatsuta insists on the truth of what is occurring is much more grounded. Even the contractors who frequently mislead workers, stretch the truth about payment, and commit other less than savory practices, are given a better rap than journalists. Tatsuta’s primary concern is not the ethics of the disaster response nor the broader ecological implications regarding nuclear energy, but rather about portraying the realities of how work on the Fukushima site has progressed. Ichi-F goes to great lengths to discuss how, of all the actors involved in the cleanup, the least volatile is the radiation.

In Tatsuta’s words: Radiation is honest.

Radiation is understandable. It is quantifiable. Measurable. Systematic. Radiation is not chaotic energy that mutates people or unexpectedly strikes down the unwary. Finding out how much exposure you have had is a matter of mathematics, not magic. Each worker has a certain amount of radiation exposure “budgeting” in day-to-day operations, yearly stretches, and lifelong exposure. The radiation at the Fukushima site is not a random force affecting each person differently; it is consistent and uniform, universally impacting all those on the site without prejudice or preference. Radiation is not acting out of motive or interest; it is a natural force no different than gravity. It exists in this world. We exist alongside it – and it us.

As the reader explores Ichi-F, that is perhaps the most surprising turn of events – radiation is the least of Tatsuta’s concerns. Because it is so mathematical, so procedural, there is no fear associated with it. There’s fear of not making rent. Fear of human mismanagement. Fear of sensationalism. Fear of lost history. Fear of missing deadlines. But no fear for the radiation itself. Stunningly, from his perspective, the real hurdle for Kazuto Tatsuta is the misunderstanding surrounding the work at Fukushima. Some of this can be attributed to human error; much of it comes from active disinformation spread by parties with something to gain from the furor. It is humans who are the volatile element, the dangerous variable in the equation, not the radiation. Contractors exaggerate. Media inflates. People deceive. But not radiation.

You can read more about “Ichi-F” on Anime-Planet and order it through Amazon. Special thank you to Kodansha Comics for giving us the opportunity to read and discuss this manga.