One day at his high school, Masato Oosuki is given an unusual handout. Ostensibly a government survey about parent-child relationships, it asks some strangely personal, and some simply strange, questions. A few days later, he finds out that his answers on the questionnaire made him and his mother, Mamako, ideal candidates for a program that transports parents and their children to an MMO style game world in the interest of deepening their familial bond. And Masato and Mamako could definitely benefit from it. Upon their arrival in the fantasy realm, though, something huge stands in the way of them improving their relationship: Mamako’s base stats are WAY higher than her son’s, and Masato, who was expecting to be the protagonist, is not happy about it.

Do You Love Your Mom and Her Two-Hit Multi-Target Attacks? is written by Dachima Inaka, with illustrations by Iida Pochi.

Do You Love Your Mom and Her Two-Hit Multi-Target Attacks? is a book that is sure to arouse strong feelings of various kinds in most readers. It’s been advertised almost entirely through hints about just how taboo its content might be. I think many light novel readers assumed it was basically taking the past decade’s little sister fetish to the next level, with everything that entails. Many assumed it would be an absolute train wreck, completely without merit. And it is a train wreck! But it’s absolutely not completely without merit, because it has Iida Pochi on board.

Pochi’s art is a bright spot in an otherwise dark void. There was no better choice for illustrator for this particular book. You see, Pochi has a unique gift for drawing a particular subset of anime girls. Their best known works all seem to feature busty women in the 25 to 35 years old range, which is exactly what this book is all about. If that’s something you’re into, then you’ll probably get a lot out of the (unfortunately very few) illustrations in this book.

But even if you’re not about that life, the skill on display is hard to ignore. Pochi uses lots of thick outlines, making even the simplest drawings stand out. And they pay extra attention to characters’ hair, which often looks surprisingly realistic atop otherwise cartoon-y characters. It sounds like that could look weird, but it ends up being quite nice. Each character’s costume is unique, with many of them having an 18th-century European flair – all shoulder pads and capes – that helps them stand out from the generic medieval fantasy isekai pack.

The writing, on the other hand, rarely deserves the same kind of praise. Many of the problems that plague light novels in general are everywhere in Do You Love Your Mom. The density of ellipses per page is unbelievable. Characters… are constantly… talking… like this… and… it’s… absolutely… infuriating… to read. One character has a speech affectation where she draws out certain vowel sounds that’s also tough to read, and doesn’t work nearly as well as it might if it were voice acted.

The humor relies far too much on running jokes, and most of them aren’t that funny. The most successful of the running gags is Shirase, the government worker who introduces Masato and Mamako to the game, turning up in almost every major NPC role, and sometimes turning up dead (revival magic is common, so dying is no big deal). A big point in favor of the Shirase jokes is that they’re not needlessly mean.

Most of the other running jokes are about characters, especially Wise, the main magic user in Mamako and Masato’s party, being useless. Or being stupid, or a bitch, or any number of other nasty things Masato can come up with to say about her. Wise is a pretty typical tsundere, a character type I don’t particularly like, but she’s nowhere near as bad as Masato makes her out to be.

Wise is another human player, who came into the game with her own mother and has since separated from her. They don’t get along for very real, believable reasons beyond just grumpy teenager stuff. Masato makes absolutely no effort to understand where she’s coming from. He assumes from how she looks that she’ll be an obnoxious tsundere, and treats her terribly because of it. This could be a jab at how anime character designs are often coded for their -dere type, but it still sucks to see Masato proven right about it and use it as an excuse to be a tool to her.

Which brings me to my other point – that most of the main characters are insufferable. Masato is the worst kind of moody teenager. He’s incredibly rude to his mom, and she absolutely doesn’t deserve it. He acts like she is out to embarrass him at every turn, he talks trash about her looks, and he says he doesn’t love her, even though it’s pretty clear from the start they have a good relationship overall. Like many teenagers, Masato doesn’t appreciate everything Mamako does for him. It’s a stereotype taken to a maddening extreme, and I really hated him, at least initially.

Mamako isn’t exactly a perfect mother though. In the world of helicopter parents, she’s an Apache raining Hellfire missiles down on Masato. She’s not trying to embarrass him, but she does. She’s overly physically affectionate, she wants to know every detail of his life, and she won’t accept refusal on either of these points. Masato treats her far worse than she deserves, but I understand the root of his feelings.

Which is why as much as I wanted to, I couldn’t dislike either of them forever. Inaka really empathizes with how the teen years are hard for both parents and children. Masato desperately wants independence, and the game world should offer him that. But it’s not as much of an escape as he’d like, because his mom’s always there. Mamako is having trouble letting go. She wants to be there for Masato and struggles to go against her instincts to swoop in and save him. And when they finally start to sort out their differences and strike a balance in their relationship, it’s very sweet and understated. And it’s Masato’s simple apology that gets that ball rolling, which is nice to see. It’s a shockingly well-written conclusion to a book that was at times so badly written it was hard to keep going.

To be fair, the book maintains an air of plausible deniability around both of these. Masato tends to treat Porta, a traveling merchant and the 12-year-old in question, more as a pet than a potential girlfriend, which is kinda creepy in its own way. But he does go on and on about how cute she is, to a point where it feels a little sketchy. And he complains a lot about how his mom looks too young and hot to be the mother of a teenager. “My mom looks too young to be my mom” is a very innocuous statement, but paired with the framing in the inevitable bathhouse and lap pillow scenes, and you get a very different impression.

These parts can be pretty funny though. Every time some interaction with his mom is framed suggestively, Masato thinks things along the lines of, “surely this is someone’s fetish, but not mine. Nope, definitely not me. Who has two thumbs and definitely isn’t horny for his mom? This guy.” It got a laugh out of me every time, but it was a raised eyebrows, eyes rolling kind of laugh rather than the hearty guffaw I think Inaka was going for. Your tolerance for this type of incest joke will be the biggest determining factor in whether you can find something to enjoy in Do You Love Your Mom. 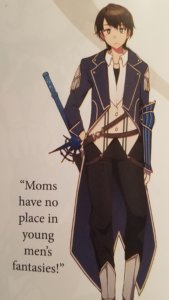 You can read more about “Do You Love Your Mom and Her Two-Hit Multi-Target Attacks?” on Anime-Planet, and order it through Amazon. Special thank you to Yen Press for giving us the opportunity to review this light novel.