Five years ago, Sakura Nanase found an elderly woman collapsed in the street. Unsure of what to do, she called out for help and was found by a young man who claimed to be a doctor. They waited for rescue services to arrive together, but before climbing into the ambulance, he left a lasting impression on the young high schooler. With no information but his name and the hospital he worked at to go off of, Nanase made plans to one day meet her prince charming again.

After working hard for years to get through nursing school and land a position at the same hospital as Dr. Tendo, the day of Nanase’s fateful reunion is here! Too bad it’s nothing like what she imagined it would be. Rude, crass, and without any memory of their meeting five years prior, Dr. Tendo is the furthest thing from the kind and gentle man she remembered meeting. Will she be able to recover from this heartbreak, or will she be turning in her scrubs before her training is even complete? 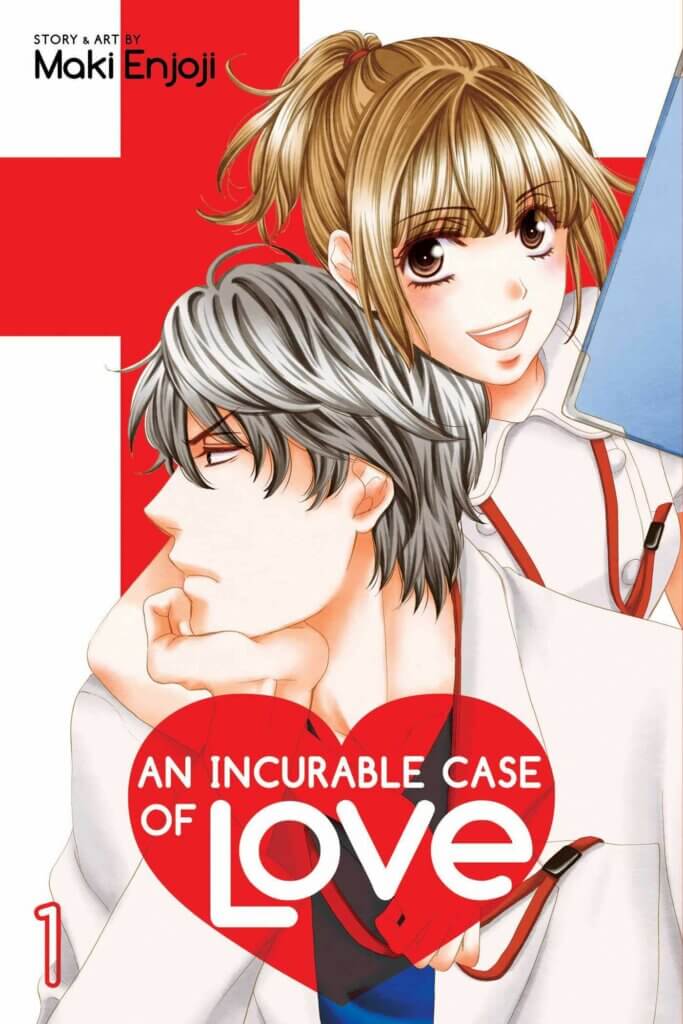 A Dose of Love

Between the crazy patients, tense procedures, and Nanase’s unrequited feelings for Tendo, An Incurable Case of Love may as well be the manga version of Grey’s Anatomy.

The story is about as straightforward as it can get. Nanase has been pining for the doctor she met so many years ago, and once they were reunited and she realized that her image of him had been viewed through rose-tinted glasses, hilarity ensues. The story is well-paced, though the subplots do jump around quite a bit as if the mangaka wanted to fit in as many clichés as possible.

In terms of the art style, it’s fine. The cover art and inside illustrations are the typical shoujo style, but both very easily show the series’ age (it was originally published in 2016). The translation and lettering are both good, though, and the volume as a whole is well polished.

Not once did this volume make me laugh, give me that dokidoki feeling, or coax any other emotion from me except irritation. 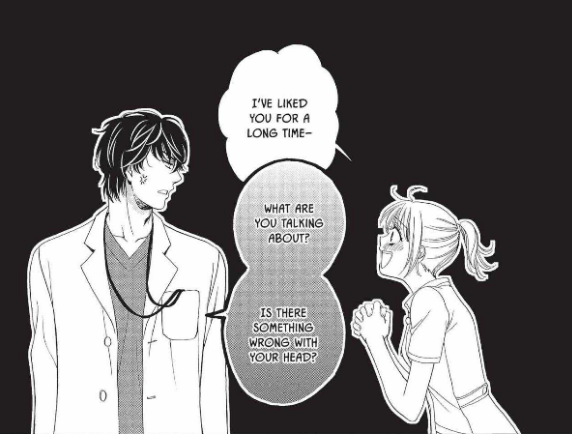 For starters, I didn’t find Nanase to be a main character worth caring about. She ‘fell in love’ with a man she met once for all of five minutes, set her sights on becoming a nurse just to reunite with him one day, and admits to basically wasting 5 years of her life dreaming of him. It’s immature at the very least, which goes without saying, but this sort of delusional plotline is not only boring, but also unoriginal, uninteresting, and honestly very harmful. I’m not saying this plotline can’t be done well–it can, and it has–but for this series in particular, I couldn’t stand it.

When Nanase got upset over Tendo not remembering her after one short meeting five years ago, I lost all hope (and that happened in the first three pages). This is supposed to be a story of a woman in her twenties, and the idea that for five years she was convinced she’d reunite with an older, hot doctor and everything would be all hunky-dory was just.. dumb. Within the first few pages, she even admits this to herself, but her constant back-and-forth emotions of, ‘He loves me, he loves me not,’ were a roller coaster ride that went nowhere but down, and fast.

It wasn’t enough that Nanase had to be an unhealthily obsessed fangirl, but the series had to throw sexual assault into the mix as an unimportant mini-plot story that did nothing but indebt Nanase to Tendo and make him out to be even more of a savior-white-knight character than he was already being portrayed as. Without going into full detail, Nanase is taking care of an older patient who is constantly grabbing her breasts and behind, which is all illustrated. Instead of doing anything logical about the situation, like going to a higher-up to complain or filing a report, she continues to care for him, saying it’s her duty to do so as a nurse.

Eventually, the situation worsens during a night shift, and the patient pulls her down onto his bed. Before anything can happen, she’s ‘saved’ by Tendo. After they have a discussion on why she was keeping quiet about the situation, she basically claims she knew it was her job and she was just going to deal with it. And when Tendo tells her that’s not something she should just deal with, she acts surprised at his response and is thankful that he’s ‘protecting’ her.

Then, to add insult to injury, at the end of the volume, Nanase gets drunk (again) and Tendo has to take care of her (again). While she’s ranting and raving about how she’s sad that a patient died and how her love for Tendo is unrequited, he kisses her. Again, she is very drunk in this scene, and it’s at the point she can’t even stand up on her own without falling down.

If it’s not obvious by now, I do not recommend An Incurable Case of Love. I know it got a live-action remake in the last few years because of its popularity, but I won’t be giving that, or volume 2 for that matter, a shot.

Instead, I’m going to binge-read a series that doesn’t cause my eyes or brain to hurt.

You can purchase Volume 1 of An Incurable Case of Love on Right Stuf.

Story and Art by Maki Enjoji
Translation by JP Productions
Touch-Up and Lettering by Inori Fukada Trant
Design by Alice Lewis
Edited by Nancy Thistlewaite
Published in the U.S.A. by VIZ Media, LLC