Hey guys, are you interested in watching Carole and Tuesday? I know that I am. From the trailers and what I’ve heard from across the internet, it sounds like one of the most unique anime to come out these days. Unfortunately for those of us in the West, it’s caught in Netflix jail: a terrible crime that means that it will come out in two parts. Thankfully, the first will appear on August 30th, but the second one is at least three months off. That means we aren’t going to get the complete Carole and Tuesday experience for a while. Don’t worry though, there are plenty of anime that are more than worth watching, or even rewatching, until then. In fact, the director has quite a few famous works to check out in the meantime. Who is he, you may ask? The legendary Shinichiro Watanabe. Maybe you’ve heard of him.

If you haven’t, Shinichiro Watanabe has a small selection of anime to watch, but each one of them has its own special sense of animation, musical style, and mood behind them. While his works may share some similarities; with shows including Cowboy Bebop, Samurai Champloo, Kids on the Slope, Space Dandy, and Terror in Resonance; you can’t say that Watanabe has been trying to achieve the same thing repeatedly. Still, these similarities are present enough that they are certainly worth looking into. Let’s take out a magnifying glass and have a look.

From the trailers, I know that Carole and Tuesday is going for a different type of character dynamic, but most Shinichiro Watanabe anime have a protagonist crew consisting of two guys and a girl. Cowboy Bebop has Spike and Jet with Faye as the starting crew (Ed and Ein are fun additions to the group). Fu, Mugen, and Jin are the main group in Samurai Champloo. Sentaro, Ritsuko, and Kaoru are the jazz kids in Kids on the Slope. The test tube kids Nine and Twelve with the normal kid Lisa is the group in Terror in Resonance. Finally, Space Dandy has Dandy, the cat alien Meow, and the non-gendered robot QT. As I said, Watanabe has some clear choices when building character dynamics.

Watanabe understands the power of three. Having three characters with different perspectives is enough to fill a show with the exploration of its characters, and leaves enough room to have a more solid dynamic between each of them. It also allows the female character in this trio to never be overtaken by the other two. Now, the dynamics between each group are very different. Jet and Spike know each other from before the show, so Faye is the newcomer that changes up the situation quite a bit. It’s the same for Terror in Resonance, with Nine and Twelve together and Lisa as the newcomer, QT, and Dandy in Space Dandy where Meow is the new crew member, and Sentaro and Ritsuko are childhood friends, with Kauro as the new transfer student that makes it into their group in Kids on the Slope. As you can tell, that character dynamic is simple but infinitely variable.

The only time that doesn’t occur is with Jin, Fuu, and Mugen in Samurai Champloo because nobody knows each other that well. It makes the show a little harder to follow because there isn’t a prebuilt dynamic for the viewer to focus on. Still, seeing them gain that sort of dynamic is very powerful and engaging.

Shinichiro Watanabe likes going for realism. His character designs are far from basic because each one of them has a country of origin and they look like it most of the time. There are some cases in Terror in Resonance and Kids on the Slope that don’t follow this, but that’s few and far between. Even in space, each person gives off that feeling that they come from somewhere. I really like this aspect because it gives all of them a sense of identity. Space Dandy, which has a lot of strange things, even has character designs that ground the show.

With the character designs come all the fantastic backgrounds. There is just something about the backgrounds in Watanabe’s shows that look realistic and strange at the same time, but there is always some comfy space to return to that feels very lived in. For example, the insides of the Bebop are iconic because the ship has its own character. It’s that one location where the Bebop crew lives and interacts together, so it feels like home. Each Watanabe show has different environments, whether they are strange, from space, or normal, but there is always a comfy place to return to and it’s beautiful.

Then the art and backgrounds are matched with realistic animation. Each character moves and feels like a real person and has their own way of carrying themselves. When the action happens, it’s always in that well-choreographed style of animation that has tons of weight to it. A lot of cool scenes involving music and brilliant bits of animation sync together better than you would ever think. For example, Spike in Cowboy Bebop was modeled after an extensive study of Bruce Lee’s fighting style. The resulting action around Spike’s scenes constantly feels weighted and realistic. Watanabe knows what he wants, and he gets it.

Alongside art and animation, music is the next important part of a visual medium. It does a lot of heavy lifting for whatever it’s involved in. How? Music, or the lack of music, can set the tone for a series, give added weight or levity when a scene needs it, or give the material in question a theme song that viewers can easily connect to wherever they go. That’s just music fundamentals. Shinichiro Watanabe’s anime takes that aspect up a notch.

How important music is to the setting is dependent on what series you watch. If the show has an episodic nature like Cowboy Bebop, each episode is immediately tied to the name of the album the episode is named after. Cowboy Bebop is an experimental anime that linked the tone of the episode, and how each episode was presented conceptually, to the type of music that was the focus. More comedic episodes have a faster and lighter music style than dramatic episodes with heavier themes, for instance. Everything about Cowboy Bebop is masterful in this way.

If a series only has one music style as its background, then that music will be incredibly unique and provide an atmosphere that speaks for itself. Terror in Resonance takes Icelandic music and spins it enough to create an amazing anime soundtrack that you can’t find anywhere else. On the other hand, Samurai Champloo takes hip hop music and plays around with it, since it matches the unique art style and tone of the show. Alongside those, Kids on the Slope is the simplest because it takes place in the 1960s and centers around kids playing Jazz. Obviously, the music is going to be mostly based on 1960s Jazz.

The secret behind a lot of Shinichiro Watanabe’s musical antics is a composer by the name of Yoko Kanno. Now, Samurai Champloo and Carole and Tuesday don’t use Yoko, but the other shows at least have some semblance of her work. Yoko Kanno is the kind of person that puts her heart and soul into learning different musical styles and using them wherever she feels like. She’s famous for her unique soundtracks across a lot of anime throughout the years. Watanabe and Kanno working together is one of the best things that could ever happen.

I have no idea if this is true of Carole and Tuesday, but most of Shinichiro Watanabe’s anime series are episodic in nature. Terror in Resonance and Kids on the Slope are decidedly not, because they have longer run times and focus on their own tight narratives. The others, however, very much are. That doesn’t mean that each series doesn’t have a goal. Space Dandy is very free form by design, but Cowboy Bebop and Samurai Champloo have destinations in mind from their first episodes (Spike facing his past in Bebop and Fuu finding the Samurai who Smells of Sunflowers in Champloo). Every subsequent episode doesn’t have to lead to this, because that’s not the point. It’s the journey, not the destination, that matters.

And yeah, so Dandy, Bebop, and Champloo are episodic in nature. While that leads to typical plot points, like characters stopping somewhere for a little while to learn about something or to go on a short adventure, the show’s mood and character interactions from each episode are the selling points. Each series is never going to show you the story in the same way or use the same style. The narrator is going to be different, the music representing each episode is most likely never going to repeat itself, and the story in progress is not going to be repeated too many times, if at all. These episodes are where the character development comes from. By seeing these characters in different situations, you learn their backstories, how they think in different situations, and how they interact with their crews. I think that’s more exciting than anything else. 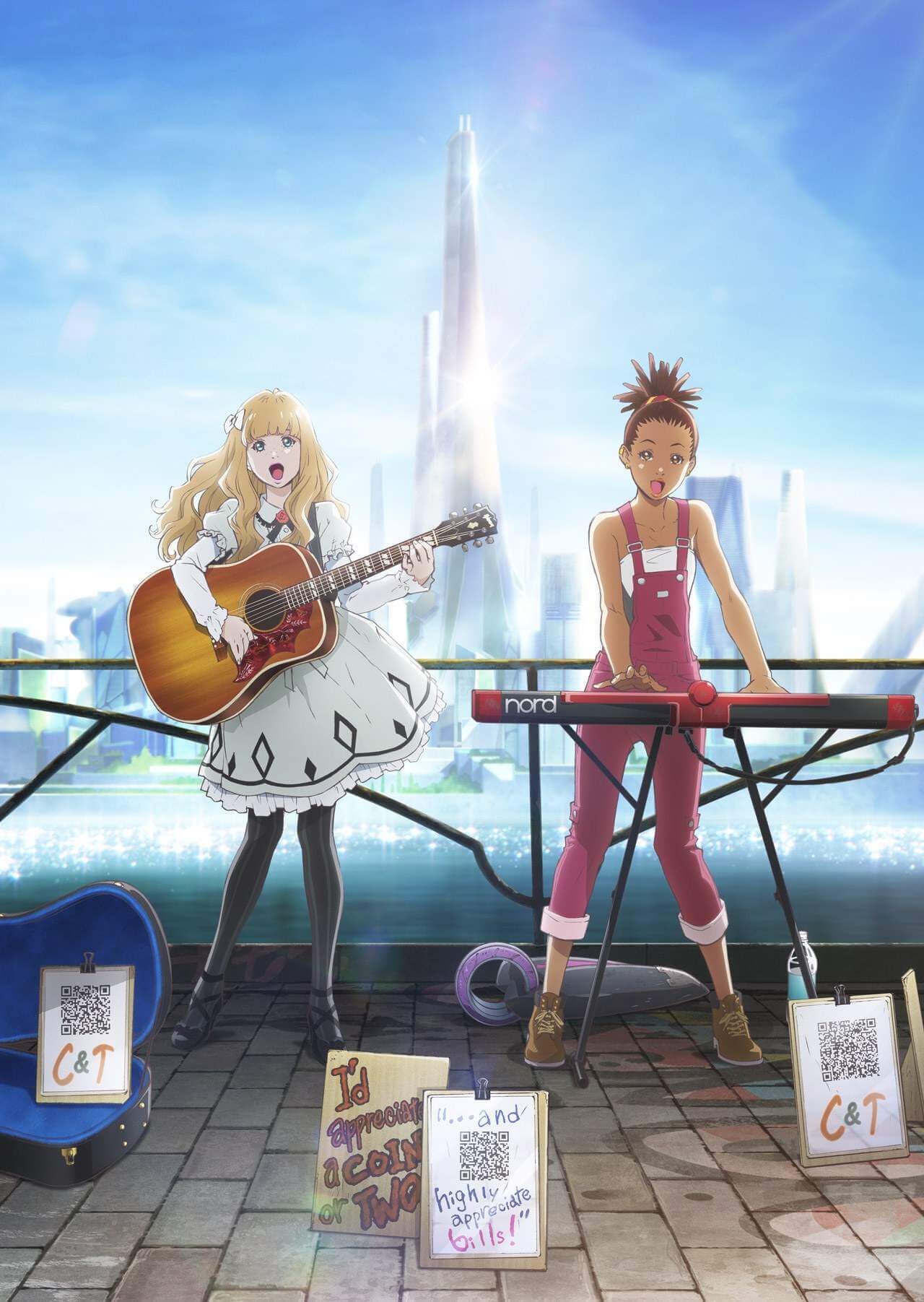 And there it is, five of Shinichiro Watanabe’s anime in a nutshell. I hope that this list has given the uninitiated viewer a good example of what Shinichiro Watanabe looks for and aims to create when it comes to his anime. Each one has its own story, its own characters, its own music, and its own heart. Please give them a watch, because they will more than fill the void in your life, at least until part 1 of Carole and Tuesday becomes available August 30th.

Where you can legally watch the shows mentioned: